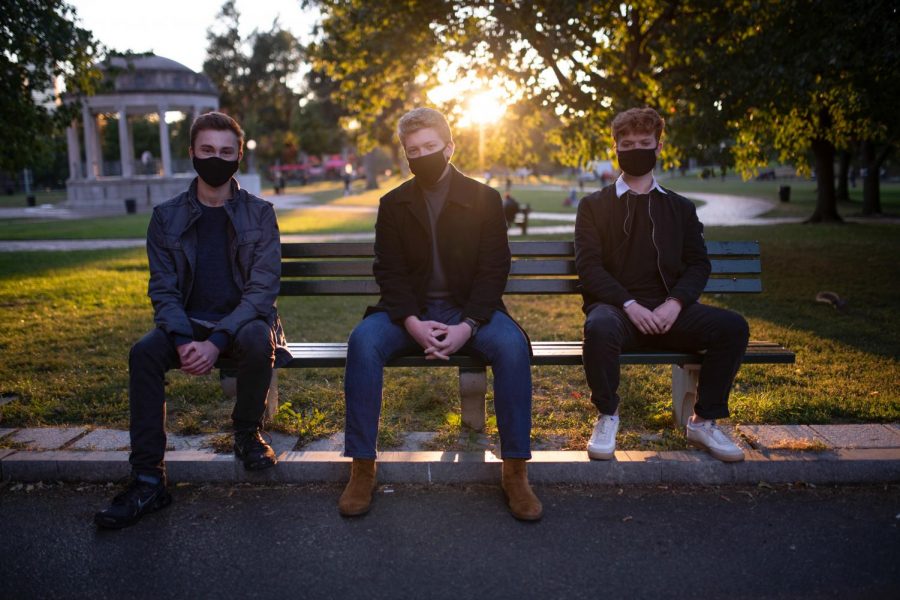 After the pandemic pushed traditional freshman orientation into Zoom, new students Maxwell Reid, Derek Delson, and William Blackwell Kinney decided to put together an orientation activity of their own for incoming first-year students.

The three students decided to start a screenplay competition where students would write a 10-page screenplay in 24 hours while quarantining during the week of move-in, from Aug. 21 to Aug. 31. The winner and runner ups have yet to be announced but will be posted on the Class of 2024’s Instagram account run by first-year Qingshi “Rocky” Meng.

“l wanted to create my own kind of challenge like [the 48-hour film festival] for the film community as a way to get to know each other and have fun in the same style as a film festival,” said Blackwell Kinney, a Visual Media Arts major from St. Paul, Minn.

While reading about the college’s re-opening plan, the mandatory quarantine period caught Reid’s attention. He said he saw that as a perfect opportunity to create a screenplay while awaiting his test results.

Reid suggested the idea to Blackwell Kinney, who he met at Emerson’s “Picture Yourself” event in February. Blackwell Kinney then proposed to challenge Delson and his roommate, who the pair met online, to see who could write a better screenplay in 24 hours.

“I was excited about coming to Emerson for the 48-hour film festival, which is not going to happen during COVID,” Blackwell Kinney said during an in-person interview.

This idea reinvigorated the group, so they decided to bring that feeling back to their peers. It then evolved into a competition that would go on to welcome 44 screenplay submissions.

A month before setting foot on campus, Reid, Blackwell Kinney, and Delson consulted each other over FaceTime to figure out the logistics of how the competition would work and who the judge would be.

“There’s so many small things that you don’t think about, especially under the circumstances of COVID and quarantine,” Delson said. “We had to really consider a lot of different things.”

The team debated how many pages should be required from participants, what parameters should be added, and how to ensure safe practices would be followed in regards to public health. But the question of who would judge the films proved to be more difficult to answer than the others.

After coming to the consensus that they would not judge the competition themselves, Delson reached out to the VMA Department Chair and Professor Cristina Kotz Cornejo to see if any faculty were available to judge. She said professors were unavailable to judge because they were too busy rebuilding curriculums for the semester, but that they were supportive of the idea.

“When [Delson] contacted me, he was proposing this challenge that while they’re in quarantine they would work in teams, obviously in their own dorms collaborating, I thought that was a great idea,” Kotz Cornejo said in a phone interview. “When I told the faculty, they were also like ‘This is a wonderful way for them to get to know each other but also to engage in the filmmaking and screenwriting process.’”

Delson wanted someone with experience to judge the competition, so he reached out to Emerson graduates and was able to recruit alumni Noah Garfinkel ‘06, Chris Romano ‘00, Jon Rineman ‘05, and Elizabeth Zephyrine McDonough ‘06 to judge the submitted scripts.

Not only did this competition encourage students to create again, but it also relieved some of the anxiety that comes from attending college during a global pandemic. First-year Aaron Razi Baseman said the competition gave him a sense of comfort.

“Writing about times that don’t really involve a pandemic is certainly a nice form of escapism,” Baseman said.

Freshman Magnolia Louis, an Interdisciplinary Studies Major focusing on screenwriting and journalism, was interested in the competition because she saw it as a way to test her abilities early on in her Emerson career.

“I really wanted to see how well I could do under pressure and I also wanted to engage myself with as many Emerson opportunities as possible,” Louis said.

In addition to testing his abilities, first-year Jacob Warman wanted to make up for lost time in quarantine and jump right back into screenwriting.

“I wanted to push myself and see what I can do,” Warman said. “I call myself a filmmaker so I might as well be one.”

And Michael Rivera said the opportunity helped him develop his skills as a screenwriter.

“I learned how to take my ideas and put them on a page, which is something I couldn’t really do before,” Rivera said. “Given the time constraint, given all the factors of the challenge, I was able to actually put it on there because I had that deadline.”

Delson said he is glad he could help students get involved in something creative from the beginning of their time at Emerson.

“It felt great to know that we helped some people get a creative project out that maybe they wouldn’t have gotten out if they didn’t have this challenge,” Delson said.