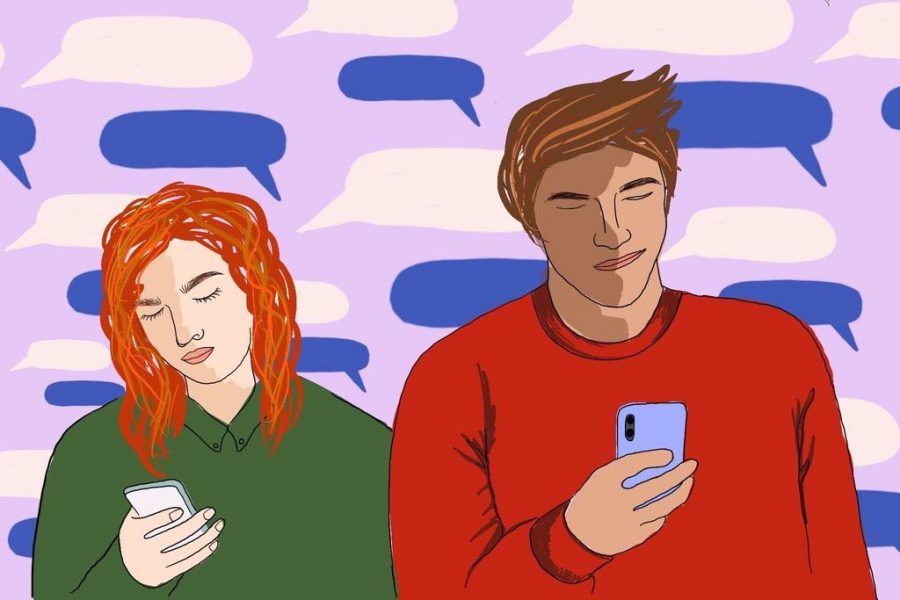 Texts are an ineffective means of resolving conflict.

I was frustrated by one of my friends’ actions. She said mean things about me behind my back, and I needed to confront her about it. I spent 15 minutes crafting the perfect text message to her before finally mustering up the courage to hit send. I anxiously awaited her response.

This process is often how I, and many other young adults, choose to resolve conflicts between friends and loved ones. A 2019 Pew Research Center poll found that 28 percent of American adults are “almost constantly” online, and 48 percent of them are between the ages of 18-29. It comes as no surprise, then, that so many prefer to air grievances over text.

Instead of going to someone’s house, asking to talk on the phone, or planning some other face-to-face communication, I find myself using texts as almost the only way of resolving conflict—which often results in more conflict.

Psychology Today writes that complaints, insults, apologies, and explanations are all topics that should not be discussed over text because they have the potential to hurt relationships. I know this, and yet I still do it.

One problem with messaging is that people often misinterpret texts, since deciphering tone, sarcasm, and other emotions can be difficult through the phone. There is no sense of non-verbals, Psychology Today reports, which allow us to get a sense of others’ feelings. No amount of emojis, words in all-caps, or exclamation points can guarantee that the other person will understand what emotions you’re attempting to convey.

While we’re at college, communicating with people far away can be difficult. However, even a phone call or FaceTime chat allows for better communication than text messaging. There’s no opportunity for twisting words or misinterpreting punctuation. Countless times, I have mistaken messages worded in certain ways to mean something entirely different. No, they didn’t mean that they hated me when they said “It’s okay,” they literally just meant it was fine.

Aside from miscommunication, there is also a sense of anxiety in awaiting their responses. When will they answer? Did they read it, or has it just been delivered? Are they screen-shotting my messages and sending them to someone else? Are they with other people? In-person and over-the-phone conversations ensure privacy and timely communication that texts do not allow for.

Part of the reason I think I prefer text communication in difficult situations is because I have the opportunity to think about what I want to say, word everything correctly, and not have to experience the awkward conversation in person. But relationships are not easy, and we should not automatically resolve conflict through the most convenient means possible, especially when it’s possible to talk in person.

Confrontation is supposed to be vulnerable, emotional, awkward, and uncomfortable. But it doesn’t have to end in an argument. Keeping this in mind will help make in-person conversations less intimidating.

Psychology Today writes some tips for overcoming the fear of confrontation. One of these tips includes using “I” statements, which focus on your feelings and how you interpret the situation, rather than being accusatory or assuming something is true. Another tip is to list the positive outcomes of speaking up, which will help push you to do it. When arguing over text has become a normal approach in your life, suddenly making a shift can be hard. But it’s worth it.

Having in-person conversations not only allows you to resolve conflict more effectively but also helps improve communication skills. Being comfortable addressing issues with others will help you become more confident and a better communicator, which can help in the future.

If you want to salvage your relationship with the person you’re arguing with, then it is essential to take the proper steps to resolve the conflict. They should be worth a car ride or phone call, even if it may not be the most convenient.

I often instinctively rely on texts as a means of avoiding conflict; however, in reality, doing so usually has the opposite effect. When I’m upset, confused, or angry, I would rather resolve the conflict quickly and sincerely through a phone call or in-person conversation, even if it may be difficult or awkward. Get out from behind the screen and talk things out.