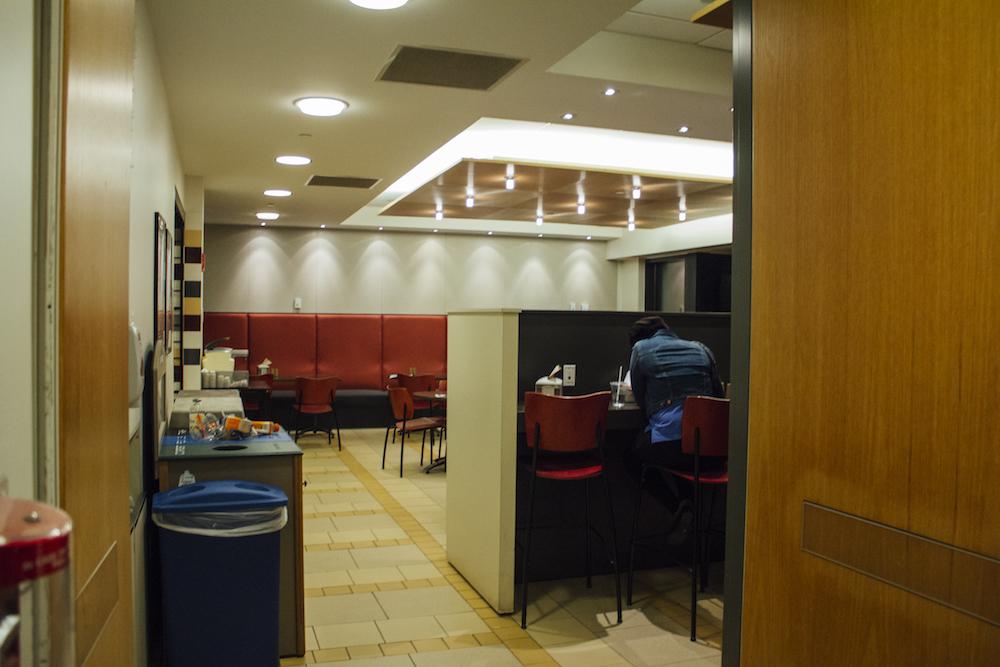 The Student Government Association is waiting for a response from administrators after submitting a dining hall initiative earlier this semester that includes demands for longer dining hall hours, more vegetarian options, and increased Board Bucks. The problem, a senior administrator said, is that many of the listed concerns have already been addressed.

Allison Singer, the SGA’s class of 2015 senator, sent the initiative to dining administrators with the hope of instituting major changes. This initiative has been in the works since 2012, she said.

“We’re in follow-up mode right now,” said the writing, literature, and publishing major. “We’re just waiting to see what the administration is going to do.”

Singer said she presented her proposal to Karen Dickinson, director of business services, and Jay Phillips, associate vice president for facilities and campus services, in a meeting last month. She said the meeting went well, and the pair seemed receptive.

However, Phillips said in an interview he was surprised when he looked through the document, because many of the points had already been taken care of.

“I’m just disappointed,” said Phillips, who has been at the college for three years. “We never highlight the progress that we’ve made.”

In the document—which is based on feedback from students, personal experiences, and analyses of student surveys—Singer details changes she believes the student body would like to see. They are separated into four categories: meal plans, hours of operation, accommodation of dietary restrictions, and sanitation.

A key request in the proposed plan is the creation of a meal plan that would allow on-campus students to eat three meals a day at any dining facility of their choice.

Currently, under the school’s default Flex Plan, students are allocated, on average, one “meal swipe” at the dining hall and $6.44 in Board Bucks per day. According to Singer’s survey, nearly half of respondents said they do not have enough Board Bucks, and 15 percent do not feel they have enough meal swipes.

“Currently, there’s not a meal plan that offers students three meals a day for entire semester without using their own money,” Singer said. “We need to change that.”

Though on-campus students are automatically signed up for the Flex Plan — which offers 101 dining hall meals, 10 guest passes, and 650 Board Bucks — there are two other options available for an added charge, the Unlimited Plan and the Block 80 Plan.

“I worry a little bit that [these options] are not well understood,” said Phillips.

Singer requested that administrators implement a plan to see to the removal of fruit flies, rodents, and cockroaches in the dining hall.

“This is an issue that has been well-documented by City of Boston Division of Health Inspection reports dating back to at least 2010, but despite a passing grade on reinspections, students have observed that the problem persists,” the initiative states.

Phillips called these complaints “inflammatory” and said the college hasn’t received a report of a mouse or a cockroach in the dining hall in the past year and a half.

“It’s downtown Boston. You’re going to have pests unless you manage them,” said Phillips. “The program we had two years ago wasn’t sufficient, but we’ve changed that.”

Phillips said the college has increased the number of inspections in the dining facilities and has kept better logs since the original complaints.

According to City of Boston records, Emerson’s dining halls did not have a pest problem this year or the last, but the Paramount Cafe did receive violations in September.

This was because of a mismarked sandwich, said Phillips.

Phillips said he eats in the dining hall regularly and has not experienced this, but he did see a dirty plate recently.

“I gave it back to one of the managers and they washed it,” he said. “These things are going to happen, just like they do at restaurants. But there is always a manager on the floor. Talk to them.”

Other complaints have also been addressed, Phillips said. The dining hall tried to extend its hours last semester, for example, but he said only a few students showed up later in the night.

And Phillips said some changes cannot be made until the college expands.

“We’re a growing institution, but we don’t have the physical space that we might need to make these changes,” he said.

In a follow-up interview, Singer said she was aware that there were some communication issues and discrepancies with the initiative. She attributed it to the length of time the administrators took to respond.

“When [Phillips and Dickinson] came to our meeting two weeks ago,” she said, “they still hadn’t read it.”

Singer said she hopes to keep an open dialogue with administrators throughout the semester.

“More actions are nice,” Singer said. “But really we just want students to be fed.”