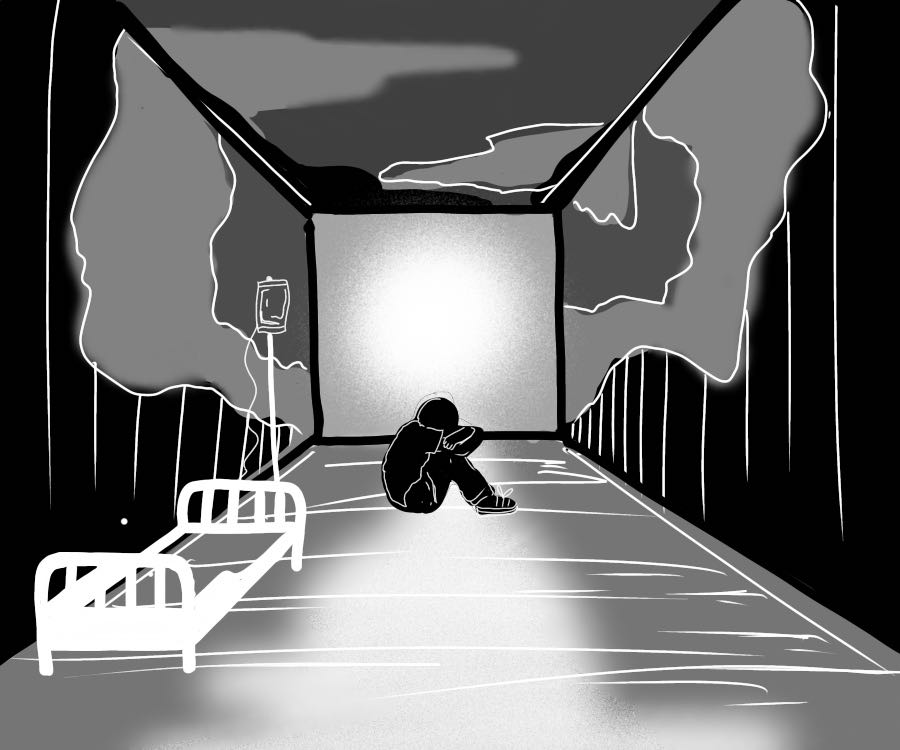 “You’re being held on Section 12 involuntary hospitalization,” the psychiatrist said in a calm and collected manner, seemingly unfazed by the unnerving shrieks of the patient in the adjacent unit.

It was 9:30 p.m. and I had been waiting in the emergency room for almost eight hours. I occupied bed #92 in the psychiatric ward, while the screaming patient—later wheeled out on a stretcher by security—occupied bed #91. Upon arrival at the hospital, I was stripped of all my belongings, except for my phone.

“What’s going on? Why won’t they let me leave? Did I do something wrong?” I remember thinking to myself as the psychiatrist closed the door behind her. My mom arrived from California the next morning, hoping that I’d be released to her. I hoped so too, but we were wrong—a second psychiatrist informed us of a bed waiting for me at an intensive psychiatric facility and that I’d be transported there later that morning. We were in sheer disbelief.

I was sent to the hospital on Dec. 13, 2019, after my usual appointment at Emerson Counseling & Psychological Services. I wasn’t aware that “going to the hospital” meant initiating a 72-hour psychiatric hold, a Section 12 in Massachusetts, and that I’d need to be evaluated by a psychiatrist to be eligible for discharge. If I wanted to be discharged sooner, I’d need to appear before a judge in court later that week. I was luckily discharged three days later, just in time for our flight back home for the holidays. There was a lot of red tape to navigate past in order for me to be discharged and there was no transparency whatsoever—no one told me what was happening or what could’ve happened.

Being held in a Section 12 psychiatric hospital granted me little to no civil rights, and I was under constant supervision of medical staff. What did I say or do that got me here? Who had the power to put me here, and who has the power to set me free? I didn’t have any answers, and whenever I tried to ask, I was given typical responses like “sit tight, be patient, and a nurse will be with you shortly.” It was a frustrating and aggravating process, one that’s frequently and systematically abused by medical authorities. Once I did my own research into mental health legislation, I realized there was much more I should’ve known.

According to Massachusetts General Laws, Section 12 of Chapter 123 permits and regulates the “emergency restraint and hospitalization of persons posing risk of serious harm by reason of mental illness” and can be signed for by a physician, nurse practitioner, qualified psychiatric nurse, qualified psychologist, licensed independent clinical social worker, or police officer. Section 12(a) allows for an individual to be brought against their will to an institution for psychiatric evaluation; Section 12(b) allows for an individual to be committed to a psychiatric institution for up to three business days against their will and without their consent. When a physician signs a Section 12, they must notify patients that they’re being placed on a psychiatric hold and state their reasoning for authorizing it. And while signing a Section 12(a) doesn’t automatically result in hospitalization, the colloquial term “sectioned” is used to refer to both 12(a) and 12(b).

Furthermore, state law 104 CMR 27.02 mandates that a psychiatric evaluation must occur within two hours of a patient’s reception by a medical facility, given that all qualified physicians aren’t preoccupied with an emergency, and the facility must inform the patient of their right to an attorney through the Committee for Public Counsel Services. Upon request, the hospital must contact CPCS so an attorney can be appointed to represent the patient. If ever found in this situation, ask to speak with an attorney yourself or ask to call CPCS at 617-988-8341. When admitted to the hospital, I wasn’t told of any of these rights—in fact, I didn’t even know I was sectioned until nine hours after I arrived at the emergency room. I was legally kept in the dark, and as a result, I was severely misguided.

There is a stigma surrounding mental health and mental illness that prevents most of us from talking about our struggles—that’s nothing we don’t already know. But in turning to the resources meant to help students through personal battles, I quickly realized that the administrative response to our mental health is to either hand us off to other providers or send us to the hospital. It’s defeating to know that sectioning is common practice, if not protocol, at Emerson College. In fact, another Emerson student was in the waiting room at the same time I was, a coincidence noticed by the attending nurses. For an institution that prides itself as a beacon of acceptance and progress, my experience with the current resources on our campus contradicts these supposed values.

Sectioning isn’t just isolating, it also reinforces the stigma around mental health and discourages those who are seeking help or on the road to recovery. What’s worse is the deliberate misleading of sectioned patients and the systematic lack of transparency that stretches far beyond our campus, which is not entirely Emerson’s fault. If Section 12 really is college protocol, shouldn’t we start by keeping the student body aware of this procedure and the legal rights we have when sectioned? And if Section 12 isn’t as routine as it seems, how else are we effectively addressing our mental health, both on and off-campus? I understand Emerson is trying to keep up with the growing demand for support and that it is responsible for thousands of students, but the least our administration can do is keep us informed. Failure to do so, in my opinion, is just as dehumanizing as being locked in the psychiatric ward.