Inspiring young readers, one Youtube video at a time 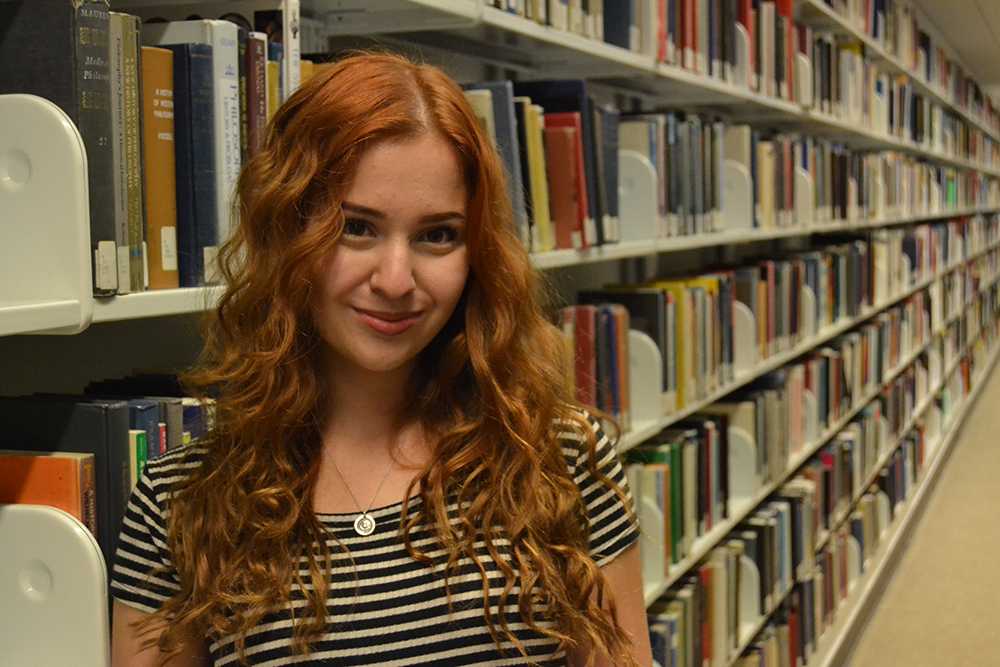 Whether she’s reviewing a book, speaking at an event, or sharing a bit of her life with her viewers, Sasha Alsberg is propelling her publishing career, having fun, and making money while running a YouTube channel with over 200,000 subscribers.

Alsberg spends most of her time reading novels, and she said she sees the literary world as a “utopia,” because for her, even though it’s her job, it’s also her passion.

As a freshman writing, literature, and publishing major, Alsberg endures a rigorous reading schedule, but she said she doesn’t mind it. Her enthusiasm for reading is how she came to gain 209,990 subscribers, as of earlier this month, to her YouTube channel, abookutopia, and what also led her to choose her course of study at Emerson.

Through her videos, Alsberg creates book reviews, mainly of young adult fiction novels, because her viewers average mostly from ages 10-25. Lately, Alsberg has been working on reading and reviewing the Harry Potter Series.

It wasn’t just her interest in reading that led her to start her channel, however. Three years ago, on Dec. 13, there was a tragedy in Alsberg’s family. After the passing of her mother, in order to avoid depression and closing herself off from the world, she said she threw herself into the books—not to avoid reality, but to embrace it.

“I decided to put all of my energy into reading, and that lead me to wanting to talk about my reading experiences through videos.” Alsberg said. “Being able to help people through tough times is rewarding, I could help people in ways I wish I could’ve been helped.”

When her channel started getting more and more popular, Alsberg said, the rise in subscribers and viewership came to her as a surprise. When a media company called Thoughtful Media Group (TMG) decided to invest in Alsberg by putting advertisements on her videos, she was a bit skeptical at first. Although it would provide her with a source of income and also help propel her channel’s popularity, she said she wanted to be sure that this was going to be best for her and not better for the network.

After much research and pondering, she decided to partner with the TMG network, which wasn’t great at first. Alsberg said she wasn’t getting the cut she thought she deserved for bringing so many consumers to the network. Recently, TMG did a complete staff change and improved their company, which Alsberg played a role in.

“They definitely wanted to keep me on because I’m one of their biggest channels, and losing viewers would mean losing a lot of their profit,” Alsberg said. “They like doing what they are for my channel, and I like what they’re doing too, so I’m really happy.”

Alsberg’s channel has taken her to many places to travel, work, and speak. In September, she was in Seattle to interview Twilight author Stephenie Meyer. She also posted a video for the release of the title and cover of The Yellow Brick War, the third novel of the Dorothy Must Die Series, a spin off of the Wizard of Oz tales, a privilege she scored because of her partnership with Harpercollins Publishing. Later this month, she said she will be hosting an event, interviewing authors, and much more at the Boston Teen Book Fest.

“Being able to reach out to an audience who is so amazing and dedicated truly is such a special thing that I cherish greatly,” Alsberg said.

A fan named Marie Lavista, from Mexico, who runs a fan account for Alsberg said that she inspires her to be a better person everyday. Lavista said she enjoys abookutopia because the reviews give her great book recommendations.

This past weekend, Alsberg was at Young Adult Bookfest at the Cambridge Public Library. She worked at the “Inspired By…” station, where she interviewed different authors that attended the event.

Alsberg is expecting at least six more years to come out of her YouTube channel, if not more as she gains followers. She said she’s a little skeptical of the changing social media platforms.

“If Youtube is still successful, I want to keep it going as long as I can reach out to an audience,” Alsberg said.

She’s already worked with many media and publishing companies and has a plethora of connections she can utilize to land a job after graduation, Alsberg said. After that, she said her dream is to start her own publishing company in Scotland, where she has been dreaming of living for a very long time, for its majestic beauty and its authority in the publishing world.

“I don’t want to move to New York, I hate New York,” Alsberg said. “I just have a weird connection to Scotland. It feels like home; the architecture, the vibe it gives off.”

Even her suitemates can attest to her love of reading.

“She loves to organize our bookshelf in fun patterns and is always ready with a great recommendation for a fun read,” said Emma Johnson, Alsberg’s roommate.

Johnson, a freshman visual and media arts major said some of Alsberg’s favorite books include Outlander by Diana Gabaldon, The Bronze Horseman by Paullina Simons, and the Throne of Glass series by Sarah J. Maas. She says they’re her favorites because they best capture the reason why she loves to read.

“I love reading because it opens new doors to new worlds,” Alsberg said. “[It] allows me to live thousands of lives even though I only have one.”