Integrate news from around the world into your news diet 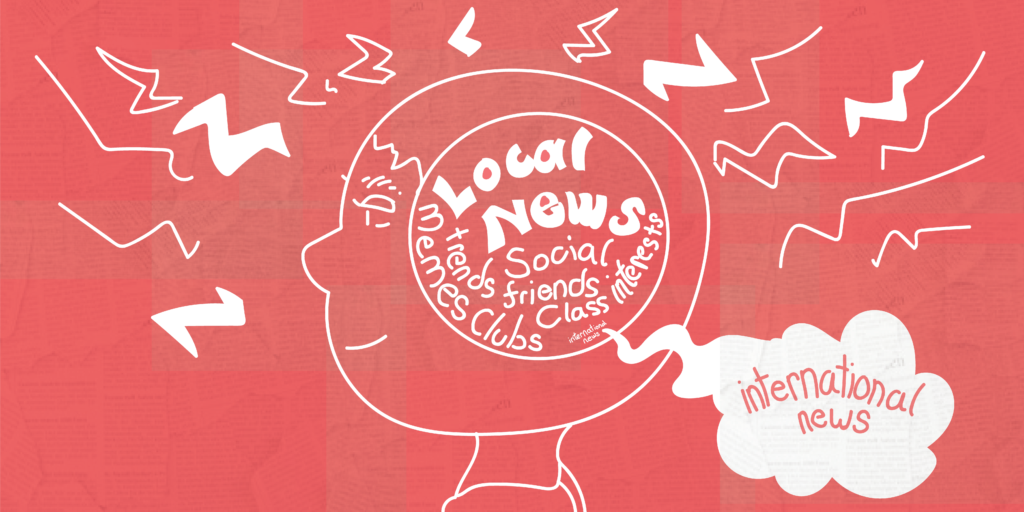 "In the age of rapid globalization, breaking news happening on the other side of the world could have an impact on people who are living in America." / Illustration by Ally Rzesa

I learned about the protests in Chile while having dinner with a friend who works as a telescope researcher in Chilean labs for the University of California, Berkeley.

“It’s nationwide,” I recalled him saying with a serious face. “All the gas stations have shut down. I can’t even drive now.”

I told him I hadn’t heard anything and asked him to tell me more about the situation. He was shocked and confused by my response. “Aren’t you studying journalism at Emerson? You must at least have heard your friends talking about it, or seen it on the news?” he asked. A sense of shame rushed to my head. I couldn’t even look him in the eyes.

As a journalism student, I subscribe to both The New York Times and The Boston Globe. I receive about five or six newsletters from each of them every day, and I usually browse the headlines to make sure I stay updated with news from around the world. However, I couldn’t recall reading anything about these protests.

After our dinner, I went home and searched “Chile protests” in my email inbox. Of course, I found that this international news was underreported in American mainstream news outlets. Even though the protests broke out on Oct. 6, the earliest mention of the situation was in The New York Times weekend briefing on Oct. 21. Out of the nine stories listed in the newsletter that day, the coverage of the Chilean demonstrations came fifth. Plus, the story did not include detailed coverage of why or how the protests happened, but rather an overview of global activism with the headline “Civil unrest is erupting around the world.” It spoke about protests in Hong Kong, Chile, Lebanon, and Haiti in one article. The Boston Globe’s coverage wasn’t much different.

I understand that as one of the most prominent news outlets in the U.S., The New York Times would prioritize telling its largely American audience what is going on in their country. I don’t expect them to update us with every single international news story. But in the age of rapid globalization, breaking news happening on the other side of the world could impact people living in America. A recent example is Swedish teen climate activist Greta Thunberg and her speech at the United Nations Climate Summit on Sep. 23. Her speech inspired additional strikes around the world and increased attention on climate change.

My peers at Emerson should seek out more international news stories. As students at a top journalism school, Emerson students fail to take the necessary initiative and should pay more attention to stories from outside their little bubble. When I asked my journalism friends if they have ever heard about the protests in Chile, the demonstrations in Catalonia, and the truck deaths in the U.K., only two among the four of them knew what I was talking about, but even then, they barely knew the details.

On October 23, I found out via Instagram that 39 people were found dead in a truck in the U.K. Soon after, my friend told me that, according to the U.K. police, all the victims were Chinese refugees who fled Europe. After days of investigation, the police updated their findings and confirmed that all 39 dead were actually from Vietnam. No matter which perspective media takes, this story is newsworthy. However, I have only saw it mentioned once in that morning’s briefing when it was widely believed that the victims were all from China, and never after that—even though there was an essential twist to the story.

But who am I to criticize them? Scrolling through all the newsletters I subscribe to, I am lost in tons of White House news, 2020 presidential polls, and impeachment developments. I only noticed the protests in Catalonia because I passed by a local Catalonian protest the past weekend. And I only checked on the updates in U.K. truck deaths story because at first, the police said the victims were from the same country as me.

Recently, I found out that Emerson’s Department of Journalism partnered with DailyChatter, a newsletter that hopes to focus on international news. On its website, it says it’s “proudly non-partisan and completely independent of all other media.” It has already teamed up with 63 universities in the U.S., and according to its statistics, 96 percent of college subscribers read the newsletter at least once a week. While the DailyChatter is just a start, I look forward to seeing Emerson students focus on what’s happening around the world, and as a result, truly care about the important stories occurring far from us.