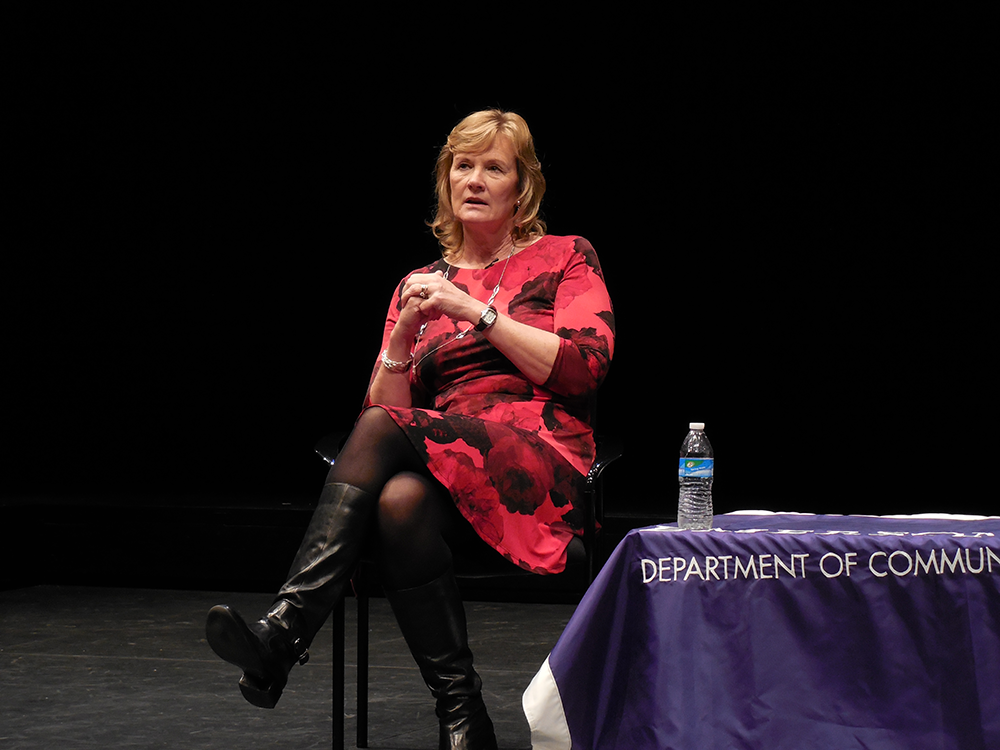 When legendary NBA writer Jackie MacMullan walked into the Semel Theater on Nov. 3, she gave a knowing wave to one of the fifty-some students gathered—her nephew, Lions pitcher Tim Mainella.

Mainella, a right-handed hurler for Emerson’s baseball team, sat in the front row for the second installment of the Al Jaffe Speaker Series, orchestrated by Emerson sports communication. On stage, his aunt captured the attention of the crowd with stories both professional and personal.

Mainella, a sophomore who will now be majoring in sports communication after initially taking up journalism, said MacMullan’s guidance was important to him.

“There’s no doubt that she influenced me to study some sort of journalism or sports-related field,” Mainella said. “Growing up and seeing her name in The Boston Globe, and [saying] ‘Hey, that’s my aunt’—that’s incredible.”

MacMullan, who now writes enterprise stories for ESPN’s “TrueHoop” and appears on-air, often on “Around the Horn,” shared that guidance with a larger audience at the event. She told the aspiring sports communicators and journalists assembled that now, more than ever, beginners can’t enter the field with only a single talent. Because of the changing media landscape, she encouraged branching out and applying to internships in print, television, and radio.

“The more diverse you make yourself, the more marketable you are to your future employers,” MacMullan said.

MacMullan made her name as a reporter and columnist for The Boston Globe, where she said she took assignments when nobody else could, even covering rowing on raw spring mornings. She said she built her career on reporting, and in what has become a more opinion-driven world, she wants those who follow in her footsteps to know good journalism wins out.

“I want our business to continue in a way that’s got ethics and morality, and I think [with] these blogs, for instance, the lines are blurred,” MacMullan said in an interview. “They’re not journalists. Journalists make a commitment to the truth and to the certain way of doing things, so the more I can talk about it, the happier I am.”

MacMullan spoke openly about the future of newspapers, and said she hopes a new business model is discovered allowing them to be profitable going forward. She said good writing is still the basis for all sports journalism, be it on newsprint or a 52-inch flat screen, pointing to ESPN colleagues Michael Smith and Jemele Hill as prime examples.

“So many of the people you see on air started out as writers,” MacMullan said. “I always tell all these people who want to be on television, ‘That’s terrific, but they’re all writers, so get that background.’”

MacMullan, the Globe’s first ever female sports columnist, also took students inside the many locker rooms she has entered, reminiscing about her days covering Celtics greats from Larry Bird to Paul Pierce. Her conversation with Jaffe followed ESPN president John Skipper’s visit to campus in March.

Spencer Kimball, the interim director of the sports communication program, said Jaffe hopes to continue the speaker series. Kimball said giving students the opportunity to learn from professionals is the goal.

“It really gives our students the confidence that they’re in the right place because they get access to these people and really get the education that you can’t teach in a textbook,” Kimball said. “When you can ask Jackie MacMullan what it’s like in 1983 to be covering the NBA, or you can ask John Skipper what it’s like to make a decision at ESPN about what to cover, not many people get that type of information.”