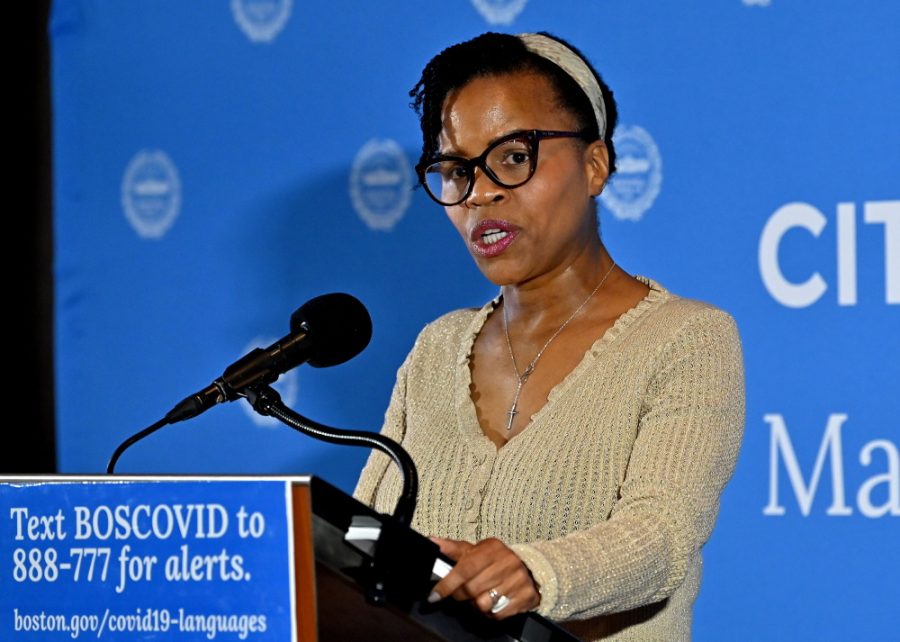 April 1, 2021- Mayor Kim Janey provides an update on Covid 19 and is also joined by Porsha Olayiwola, the City of Boston Poet Laureate, to kick off National Poetry Month.

Kim Janey, the former city councilor who has been serving as acting mayor for two weeks following the resignation of Martin Walsh, will seek a four-year term this fall, ending speculation about whether she will try to keep the job and joining five other candidates who are already campaigning for the post.

Janey released a video Tuesday morning in which she outlined her areas of focus — affordable housing, racial inequities, educational opportunities — and pledged to capitalize on “our chance to build a more equitable city for every resident.”

“My life’s work, from education advocacy to leading the city council, has been centered around making sure every child has the opportunity to learn and succeed in a more just city than the one I grew up in,” Janey, who lives in Roxbury, says in her video. “See, I was part of desegregation busing. Eleven years old, having rocks and racial slurs thrown at me. I’ve been at the center of Boston’s history. The bad and the good.”

On Sept. 21, voters will choose two candidates to go head to head in the Nov. 2 election, with the winner securing a term that runs through 2025.

Unlike her rivals, which include three city councilors, a state representative, and Walsh’s former economic development chief, Janey will have the advantage of serving as mayor during the campaign. It gives her a bigger stage to prove herself to voters but comes with risks too as any mistakes will be magnified.

In 1993, after Mayor Ray Flynn resigned to become U.S. ambassador to the Vatican, City Councilor Thomas Menino slid into the acting mayor’s seat. That same year, in the regularly scheduled mayoral election, Menino defeated Jim Brett to start his historic run as mayor that ended when Walsh succeeded him in 2014.

In seeking to become the first woman and first Black person to be elected mayor of Boston, Janey joins a field of candidates of color.

Janey on Monday held a press conference to announce a campaign to elevate Boston’s status as a travel destination, and campaign politics followed from it.

“Six months ago, I awarded the largest City contract a woman- and minority-owned business has ever received,” Barros said. “The acting mayor is holding a press conference about it this afternoon. I’m very proud to have led the creation of the All-Inclusive Boston tourism campaign over the past year, and I’m proud to see it moving forward. I hope to see further investment in this campaign in the immediate future.”

In making the announcement, Janey thanked Walsh for commissioning the campaign.

While official mayor’s business and campaign business are separate, Janey is now both a candidate and the officeholder and has the advantage off drawing attention to herself that the other candidates don’t. On Tuesday, she plans a press conference to launch an effort to encourage residents to get the COVID-19 vaccine. She will also provide an update on COVID-19 cases, testing, and vaccination and now faces the pressure to make sure those efforts are successful.