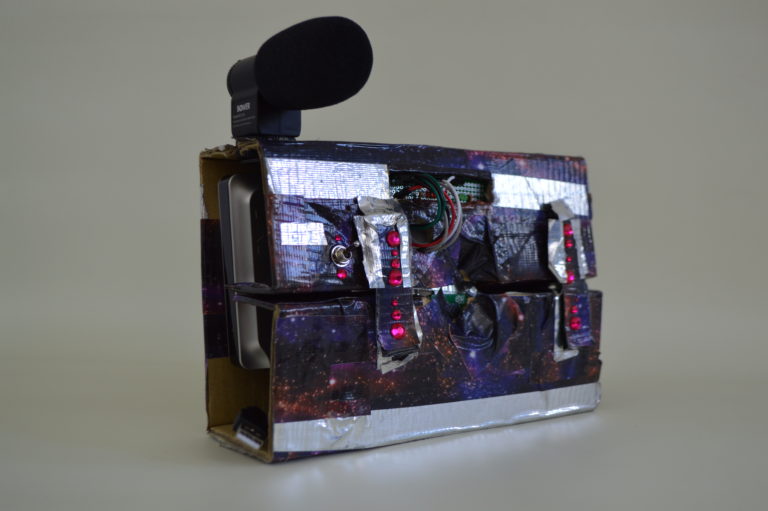 Emerson journalist-in-residence Lina Giraldo taught immigrant community members how to build cameras from recycled materials in 2018 as part of a project with the City of Boston. Now, the cameras are on display at an exhibit titled Awaken: Conjuring Our Tomorrow and features work from Latina artists that focus on climate issues.

The exhibition, curated by artist Allison Maria Rodriguez, will remain at Salem State University until March 13. Giraldo has two pieces at the exhibit—a video critiquing electronic waste called “Game Over” and four cameras made by Giraldo and members of the Boston Center-Youth & Families organization—an organization that helps families with after-school care and general community service.

Giraldo was one of the Boston artists-in-residence hired to help communities grow closer through workshops and projects. From 2017–2018, she partnered with the organization to create a project that brings the community together. As a professor specialized in data visualization and humanizing multimedia stories, Giraldo said the project embodied the idea of creating tools for making stories that did not harm the environment.

“We use recycled materials, the project’s primary motivation is to create ownership, understand identity and the use of technology but the main thing here is how we can actually be makers instead of consumers,” Giraldo said.

The video “Game Over” seeks to inform audiences of the excess electronic waste from computers and video games, especially those with worldwide popularity. Giraldo said “Tetris”, a popular video game, is the main focus of the video, due to its mass waste production.

“The idea is that I went to a bunch of places that recycled computers and I took photos and recreated [‘Tetris’], so the whole point is that computers and video games, particularly ‘Tetris,’ the game that is being played most in the history of video games, are creating waste,” Giraldo said. “So it talks a lot about electronic waste and that’s why it’s called ‘Game Over,’ in this game you don’t win, we always lose.”

On top of raising awareness for climate change and waste, the exhibition aims to highlight Latina artists who have contributed to combating climate change, Rodriguez said. The exhibition includes a mix of different art mediums such as photography, painting, videos, and other medium forms.

“I knew right away I wanted to do something that supported Latina artists, and my own artistic practices tend to focus on species extinction and climate change but also interweaving that with issues of identity and other alternative ways of thinking about climate issues,” Rodriguez said in a phone interview from Boston. “Like imagine the planet going through climate change as the brain experiencing trauma. And so I had the idea of combining those two and focusing it on Latina artists.”

Giraldo said Rodriguez contacted her around seven months ago and that she jumped on the opportunity to be a part of an exhibition involving two of her biggest passions—climate and Latin identities.

“My work as a Latin woman artist has always been very important, like how can we amplify the voices of the Latinos and how can we talk about immigration,” Giraldo said. “It’s always been about environmental issues but ever since I became an immigrant the narrative changed a little bit. I learned how important it was to change the narrative as a Latin woman. Because now I have the responsibility.”

Rodriguez chose artists from all over the country for the exhibit. As an artist herself, she said she found it important to highlight others instead of including any of her work in the exhibit.

“[Giraldo] is an artist I’ve admired for a very long time…I discovered her work and we both work with technology,” Rodriguez said. “She also brought in the angle of coding with technology which is a really important aspect of the conversation about climate change which none of the other artists in the exhibit are doing quite the same way as she is.”

The exhibition includes Colombian painter Ana Maria Velasco’s landscape painting of La Sierra Nevada de Santa Maria, the largest coastal mountain range in the world. Velasco said it is one of the most irreplaceable places in the world in terms of biodiversity.

Velasco said highlighting the work of women speaking about climate issues is important because it relates back to the roots of many beliefs of indigenous tribes in Latin countries: listening to the women in the community.

Giraldo said her narrative has changed over the years. However, it’s always focused on the impact of mistreating the environment and its effect on the planet and people.

“For years my main goal is how to talk about the harm that we do and the humankind impact that we have in our surroundings,” Giraldo said. “And I’m an immigrant so I’m always thinking about how we can be more careful with our environment and include the conversation of the people that are most affected.”