Journalists warn students about dangers of Facebook during panel discussion 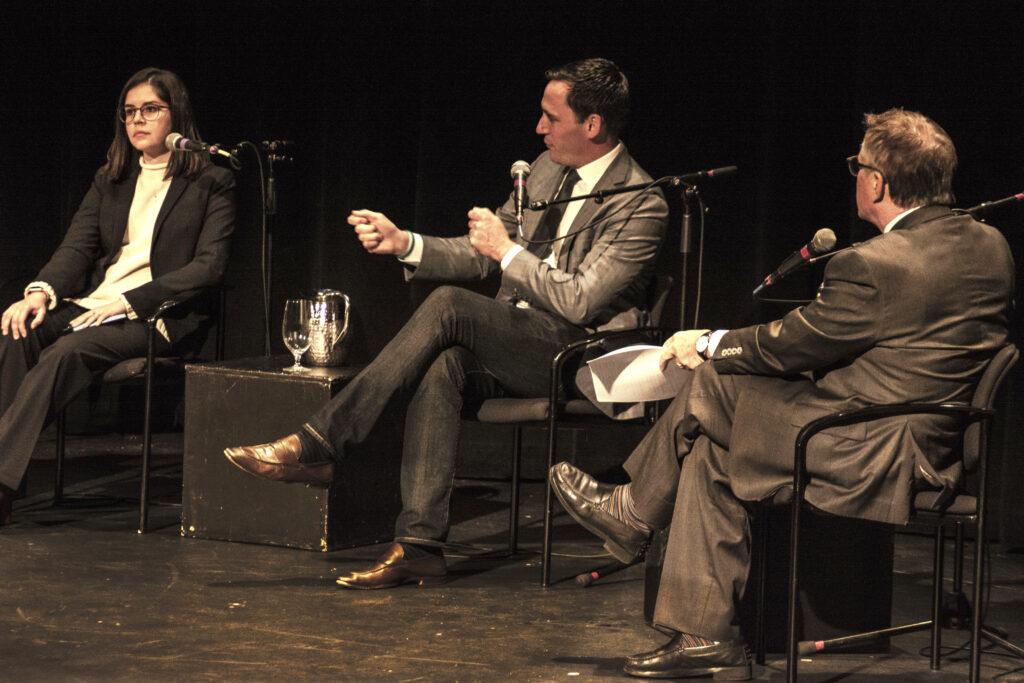 Journalists from CNN, POLITICO, PolitiFact, and New England Cable News came to Emerson to talk about the upcoming presidential election and the coverage of it. Xinyi Xu / Beacon Correspondent

New England Cable News journalist Sue O’Connell called on Facebook to increase protections from the spread of misinformation at the Covering 2020: News, Trust, and the Future of the American Presidency event at the Paramount theater on Oct. 22.

“Without Facebook putting some guidelines and some ramps and some bumpers in place to help people in their busy day to know what they’re looking at is made up, or a total joke, I think we’re doomed,” O’Connell said to a full house.

Assistant Professor and Director of Emerson Polling Spencer Kimball opened up the event, hosted by Emerson College, with a discussion of innovative polling techniques that have made the school a go-to for many national media outlets.

The keynote panel featured three journalists from CNN, POLITICO, and PolitiFact alongside O’Connell. WCVB anchor Ed Harding moderated the discussion and asked about the most pressing issues in the Democratic primary, the pitfalls facing journalists, and the changing path to victory for presidential hopefuls.

O’Connell’s fellow panelists agreed their biggest worry for the upcoming Democratic primary elections is misinformation and the ease with which it is spread.

As an example, PolitiFact contributor Miriam Valverde offered her outlet’s limited partnership with Facebook. PolitiFact fact-checks posts flagged by Facebook users and label the post with their findings. By their own analysis published on their website a year into the partnership, they’re only able to address an estimated 16 percent of all the false news stories being shared every day. According to Valverde, fact-checking is a growing trend, but some people choose to share content even when it’s labeled as false.

“The more fact-checking that people see the more … they are to be willing to accept that fact-check, but I don’t think that’s the case for everyone,” Valverde said. “I think whoever has a certain conviction might stick to it despite the fact-check saying otherwise.”

The panelists all agreed President Trump’s rhetoric also puts voters at a disadvantage by hurting the media’s ability to inform the public.

CNN’s Political Director, David Chalian, told the crowd the president is entirely wrong about their news being fake.

“We work in newsrooms all day long where people are doing their jobs to seek out the facts, pursue the truth, try to put that in context for people,” he said during the discussion. “News that you don’t like does not mean it’s fake. News that you think reflects negatively on you does not make it fake.”

“One of the downsides to this consistent, persistent uses of this term fake news is that we’ve come to a point where there’s so much confusion that we don’t know what’s accurate or newsworthy, and that has a completely negative effect on us as a society, as a democracy, because we come to a point where it’s like who do we believe?” she said.

As the panelists moved into a discussion about the general election, the question became whether voters want change at all.

“If unemployment is at 3 percent, the stock market is over 27,000, heading to 28,000, if there’s money in 401k’s, if the value of your house has gone up, when you draw that curtain or flip that switch, why are you gonna change things?” Harding asked the panel.

While each panelist identified a variety of hot button issues in the Democratic primary, from the economy to immigration, they concluded that electability in the general election would be the deciding issue amongst Democratic voters.

“Iowa will play an even more important role this time around than usual because of that quest for Democrats to find the Trump dragon slayer, the one that can defeat him,” Chalian said.

The panelists urged students to be active in campaigns, saying Emerson students have a fantastic opportunity to get involved by going to nearby battleground states. Paul Volpe, POLITICO’s executive editor, said in an interview after the panel that he expects people of college-age to play a major role in the upcoming election.

“Obviously I think there will be a lot of organizing that’s done with younger voters. That will be incredibly important around New Hampshire and in this area particularly,” he said in an interview with The Beacon.