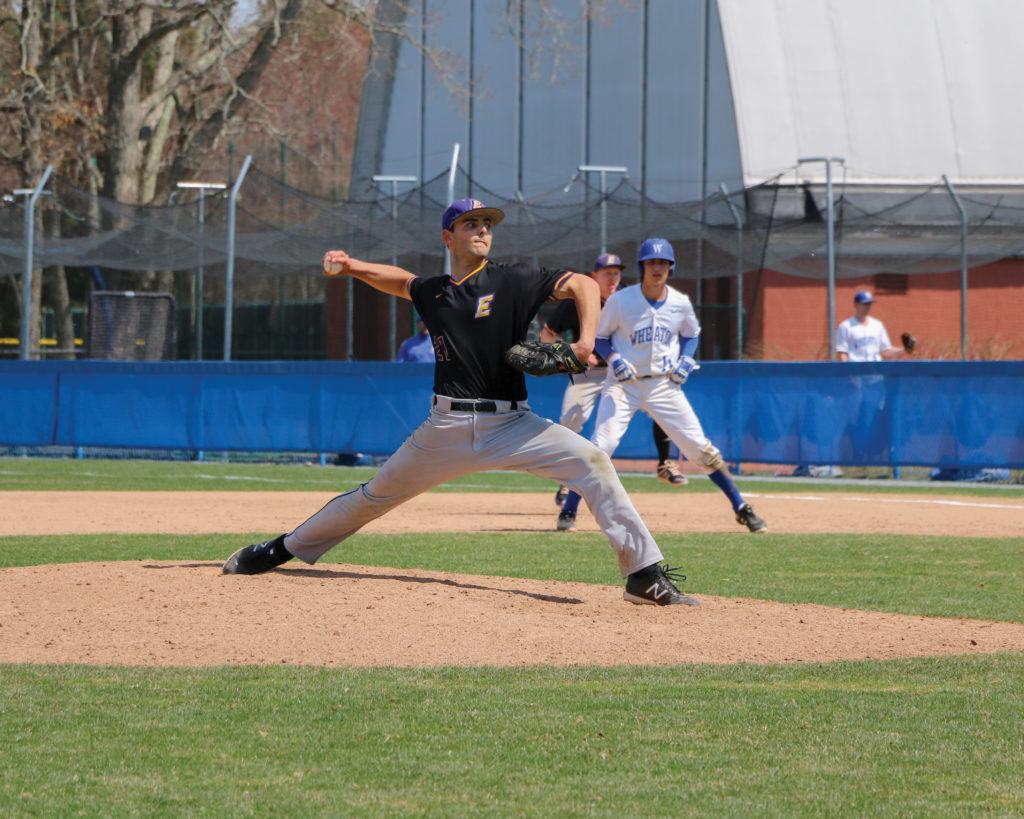 At three years old, Jack Fox said he practiced pitching by throwing rocks into his neighbor’s yard. Now in his junior year, he leads the conference with 56 strikeouts on the baseball team and became the first starting pitcher in Emerson history to pitch a complete game.

“I have always been surrounded by baseball,” Fox said. “My dad would surround me with baseball, all of my friends would be from baseball. Baseball has always been the center of my life.”

Fox, a junior business of creative enterprises major from Los Angeles, California, totals 56 strikeouts in 52.1 innings pitched—the highest strikeout per inning ratio in the New England Women’s and Men’s Athletic Conference for players with over 40 innings pitched. Fox accounts for four of the six wins for the Lions this season and has a 3.10 earned run average in 10 appearances.

Fox started playing Little League Baseball at age our with his father as his coach. At age 12, Fox joined a club baseball team where he made the roster but never started. While playing on the club team, Fox also played for the baseball team at Cleveland Charter High School in Los Angeles.

In his junior season at Cleveland Charter, Fox did not receive much playing time on his high school or club teams. When looking for colleges, Fox said he wanted to find a place where he could pitch more.

“I saw that Emerson didn’t have the best season that year,” Fox said. “They ended 4–28, and it seemed like they needed some new pitchers. I called [head coach Nick Vennochi], and he said ‘Buddy, if you come here, you’ll start for all four years.’”

About a week later, Fox flew out to tour Emerson’s campus and former home stadium in Brockton, Massachusetts. He said both the players and facilities impressed him.

“I saw the players working out in the gym, I saw this beautiful stadium, and I got along well with all of the players that I met,” Fox said. “Boston is a beautiful city, and with everything the school offered, it just seemed like a great environment to play baseball.”

After deciding to join the Emerson baseball team, Fox began to put a lot more work into his training and strength as a pitcher. Even though the sport surrounded him his whole life, Fox said he did not take training for baseball seriously until his senior year of high school.

“It was a maturity thing,” Fox said. “I just always expected results, but never put in the work required to see those results. I realized the more relentless I was about my work ethic, the more I would see it pay off. I went from throwing 80 miles per hour in my junior year to hitting 90 after committing to Emerson.”

In his freshman year at Emerson, Fox pitched a team-best ERA of 2.52 with 26 strikeouts but finished with a 2–5 record as a starting pitcher. As a sophomore, Fox pitched an ERA of 4.07 with a team-high 49 strikeouts.

Vennochi said Fox showed a strong work ethic since he joined the team.

“He’s been ready to rock since he’s been here,” Vennochi said. “He’s been an absolute horse for us. He’s the hardest worker on the pitching staff, and it shows.”

Even though the baseball team has experienced little success since he joined the team, Fox said he learned to push through difficulties.

“The adversity of Emerson baseball has made me a tougher baseball player mentally,” Fox said. “Playing through adversity is like swinging a weighted bat—it’s harder than it should be. When things do go well, and our team can make the plays, it feels super easy.”

Fox said he feels satisfied that the work he puts in independently during practice shows on the mound.

“It feels good to have all of the hard work I’ve put in pay off,” Fox said. “A crucial part of pitching is long tossing consistently, and it’s been hard to find a partner [to long toss with] here. I have probably thrown to a wall or a net with a bucket of baseballs by myself about 100 times in the past year, and it’s nice to see that paying off.”

“What makes [Fox] so good is the pace that he works at,” Colucci said. “He works faster than a lot of hitters can keep up with. You’ll look down and look back up, and the inning will be over with three strikeouts.”

As Fox’s junior season winds down, he said he feels hopeful and looks forward to his senior season.

“Without a doubt, this season we have more talent than the Emerson baseball program has ever had from what I have seen,” Fox said. “We have surpassed our extra base hits from last year halfway through the season, and our outfield is solid. We have a lot of potential. I think if the coaching and players prioritize getting better in the right ways next season, we have a lot of potential.”

Fox and the baseball team will take on Babson College on April 19 at 3:30 p.m. at St. John’s Prep in Danvers.