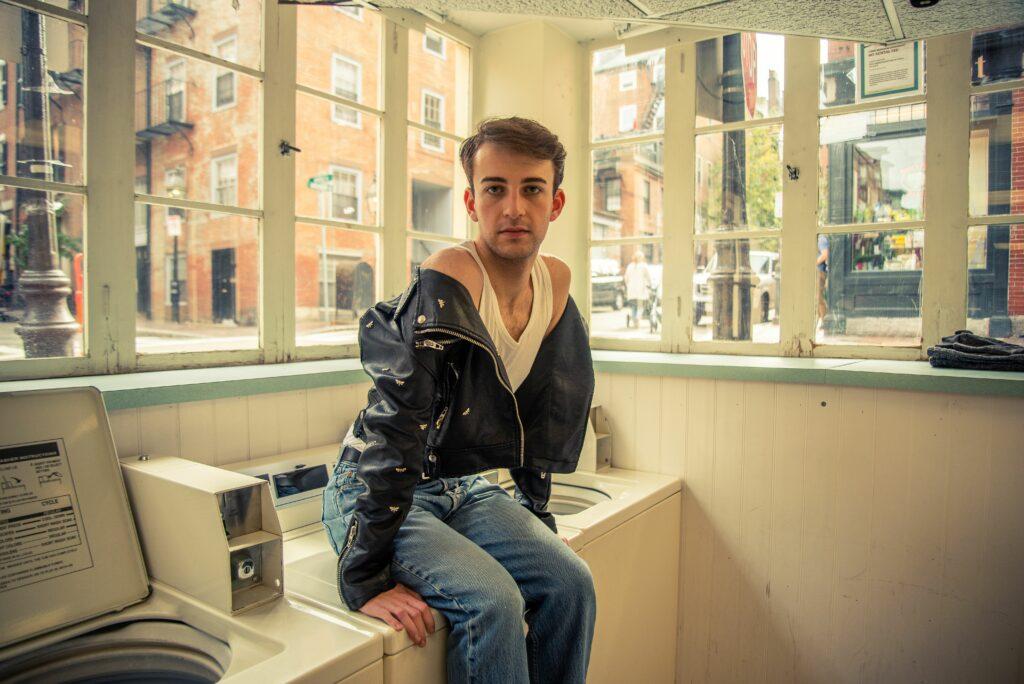 Muccitelli unintentionally discovered Bonnie Parker’s lesser-known identity as a romantic poet and painter before her husband Clyde Barrow introduced her to a life of crime. This discovery drew Muccitelli to name his musical onstage persona “Bonnie Parker.”

“As a proudly open gay young man, I wanted this project to be aggressively queer, so Bonnie Parker, a female name, became my stage name,” Muccitelli said in an interview.

Muccitelli’s musical career started at age 12 when he began posting YouTube videos covering Adele songs while playing the piano. This series of videos garnered him a YouTube following at a young age. Currently, Muccitelli has a couple thousand followers on Instagram, and the Bonnie Parker Instagram account has one thousand followers.

“I was lucky enough at that age that some of those videos kicked off, but as time progressed, I became an adult and figured out who I am as a person,” Muccitelli said. “I realized that the following that I built up and the portfolio that I made for myself online didn’t match up with who I am now.”

After Muccitelli released his first album titled Fear of Intimacy on May 9, 2018 under his legal name, he said he realized he wanted to create something completely new that gave him a fresh start through a different music persona.

Muccitelli said he always wanted to perform under a stage name, but the fear of being judged and not taken seriously as an artist prevented him from creating a persona like Bonnie Parker. He credited Cher and her bold stage presence as the force that pushed him to create Bonnie Parker.

“I was so scared to start making music under the name Bonnie Parker and dress as a woman on stage—like, [that’s] risky shit, man,” Muccitelli said.

Muccitelli said he envisions a specific image for his presentation of Bonnie Parker.

“I want Bonnie Parker to have an alternative rock, edgy sound, and incorporate drag elements to experiment with the gender binary which I haven’t seen a lot of in music,” Muccitelli said. “But this project gave me a fresh slate. I would be able to market it from the ground up—I will be able to reach the audience that I want to reach.”

At first, Muccitelli said he started using the name Bonnie Parker as a way to process his emotions and turn them into music. However, he said he changed his focus after the response Bonnie Parker’s music receives on social media.

Michael Valenzuela, a senior at Whittier High School in California, became a fan of Muccitelli’s music when he discovered the song “Boys” from Fear of Intimacy through Spotify about a month ago. After playing the song on repeat for a month he started to listen to all of Muccitelli’s music, including Bonnie Parker’s various singles.

“Bonnie Parker is an artist who is making music that I feel like I can connect to and inspires me to embrace myself,” Valenzuela said.

After Muccitelli released his song “Jason” on May 2 under Bonnie Parker, many LGBTQ+ high schoolers messaged him on Instagram to tell him their connection to the song.

“When anyone tells [me] that they have a shared experience with my songs, [it] literally makes me feel so special because writing helps me, so I am hoping that it can help others, specifically gay people because gay trauma hits different,” Muccitelli said.

The growing impact of Bonnie Parker changed Muccitelli’s opinion on his stage persona. He said he now wants to make Bonnie Parker a cultivated vision for the LGBTQ+ community rather than something for just himself.

Muccitelli does not work on the project alone, although he is the face of Bonnie Parker. Jack Severino, a junior at the University of Southern California, and Alex Andrews, a California-based drummer, producer, and composer, collaborate with Muccitelli on the composition and production of his music.

Andrews said Muccitelli solely writes the lyrics, but the full production of arranging, layering, and producing the sound of each song is a creative collaboration between all three.

“We always include everyone,” Andrews said in a phone interview from California. “Everyone is a large part of Bonnie Parker, and [Muccitelli] is open on all ideas that [Severino] and I produce.”

When Muccitelli is in Boston, he said he performs alone because his bandmates all live in Los Angeles. Muccitelli has performed in Boston at small venues and open mic gigs.

“Something about me being up there all by myself makes it more intimate because it gives the audience a chance to listen to the songs on how they were written because that’s the song’s natural form,” Muccitelli said. “But I think it’s great to perform with a full band for the music’s sake because I can focus just on my vocals and the audience.”

Muccitelli, Severino, Andrews are currently working on an album to be released under Bonnie Parker which they plan to record during winter break when they are all together in Los Angeles again.

“Bonnie Parker addresses the pain that does not appear in mainstream media,” Mucctelli said. “So when someone is able to find my little nook of the internet and finds solace there, it’s really cool that I have an influence on people.”