Sophomore guard set to bounce back after two years of injury 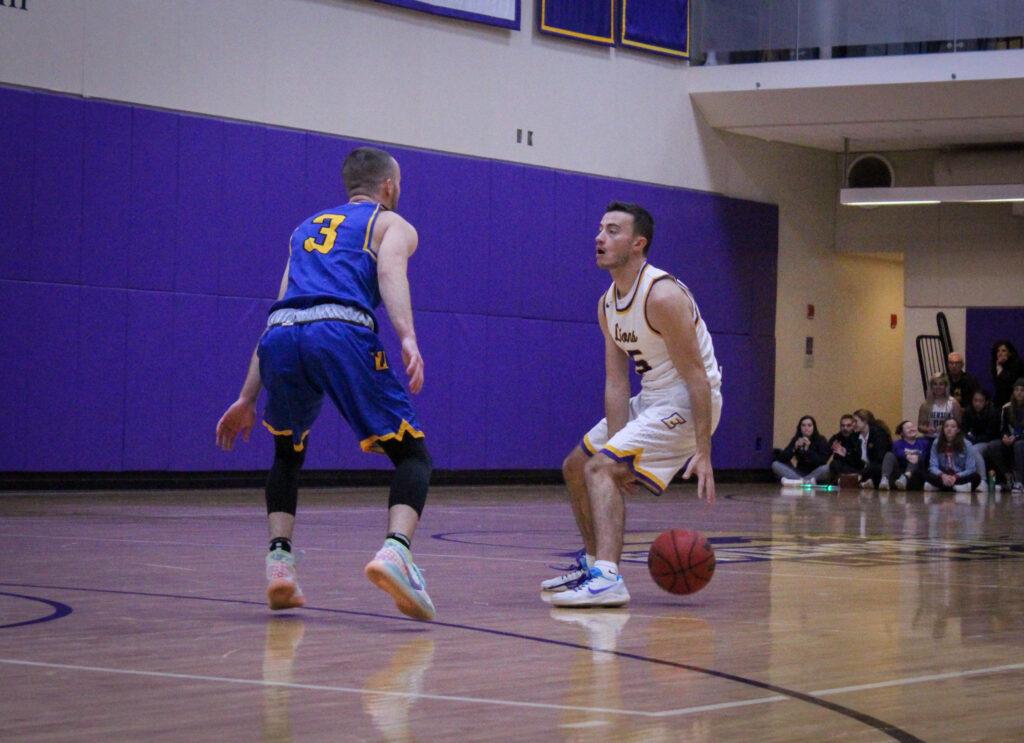 In his first full competitive season since his senior year of high school, sophomore point guard Chad DiCenzo is showing promise on the men’s basketball team.

DiCenzo enters this season coming off two consecutive years of injury. He transferred to Emerson after starting his collegiate career at Clarkson University where he missed every game except one during his freshman season with an ankle injury.

In fall 2018, DiCenzo reached out to the Emerson College men’s basketball coaching staff to express his interest in transferring. Associate head coach Jack Barrett said he met DiCenzo at a youth basketball camp in Andover, Massachusetts.

DiCenzo played in seven games last season before suffering a season-ending injury. DiCenzo’s appendix ruptured on a bus ride to a game at the Massachusetts Institute of Technology last season, head coach Bill Curley said in an interview earlier this season. DiCenzo recorded three assists last season but recorded 12 through the first two games this season.

Even though the injury ended his season, DiCenzo fully recovered during the off-season and said he is ready to play this year.

“It’s not something that lingers back, so I feel pretty good,” DiCenzo said in an interview. “It’s the first time I’ve gotten to really play basketball since my senior year of high school, so I’m really ready and excited to finally be able to play.”

“He’s a really intelligent player, he’s a highly skilled player, he’s really just a basketball player,” Curley said in an interview. “As a point guard, he gets the ball where it needs to go, and he’s got a ton of kids to pass it to, but he also understands that if someone’s up on him he’s got to take advantage and go by them and put the ball in the basket. He’s just a great point guard to have on the team.”

Curley said he is excited to see DiCenzo on the court after a short season last year.

“In the five or six games last year, he had a tremendous impact on the team,” Curley said. “He had a full summer, and he’s pretty comfortable. We expect big things from him this year.”

DiCenzo is known by his teammates as a talented player and leader on the court as well as a good teammate off the court.

“We love Chad, he’s great,” senior forward Ben Holding said in an interview. “He can be a little quiet off the court, especially coming in as a transfer, but he’s very vocal on the court. As a point guard, he’s really good at directing traffic and conducting offense.”

As the season progresses, DiCenzo said he is confident in his team.

“Our team is really, really good,” DiCenzo said. “We have so many pieces, and we play really unselfish. Our expectation should be to try to win every single game.”

“We want to be the best team we can,” Curley said. “If our guys work as hard as they can and bring that effort and energy every day, they’ll have a chance to win every game they play in. They’ve worked hard to put themselves in that position, and now we just got to finish the deal.”

DiCenzo will have a big leadership role to play this season as one of the older players on the team, and Curley said he is confident in DiCenzo’s leadership and maturity.

“He’s one of the older kids on a young team,” Curley said. “He’s been around a little bit. Even though he’s academically and athletically a sophomore, he’s really a junior, and he’s got that maturity, which is what we’re looking for with our leadership. He can stabilize and help get guys where they need to be.”