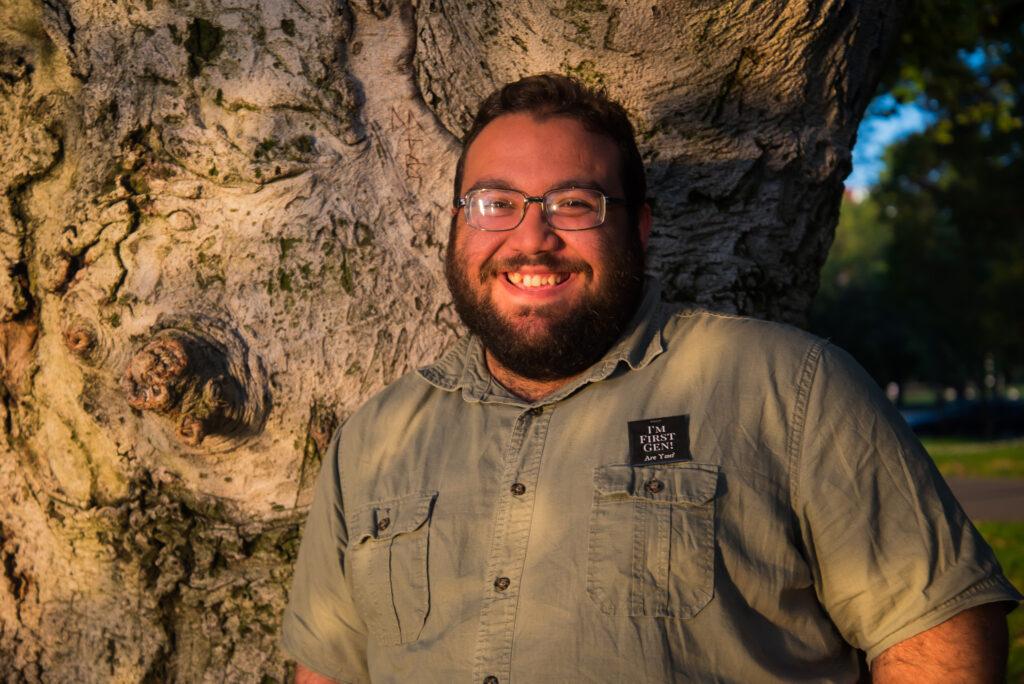 For most new students, the colorful sight of banners and orientation leaders in blue shirts and glitter makeup is a warm welcome to the new campus. But for first-generation college students like junior Anthony Rodriguez, orientation week can feel more lonely.

Rodriguez identifies as a first-generation and low-income student. He said he often hears phrases such as “I’ll just put it on my mom’s credit card” or “it’s not that expensive” being thrown around on campus by his peers. That, and his desire to create an inclusive space for students like himself, led him to organize Emerson’s first student orientation event for first-generation college students.

Students, orientation leaders, and Emerson staff attended a lunch held in the Cabaret on Aug. 30 hosted by First Gen E-M, an Emerson-affiliated organization which Rodriguez and his co-president, senior Cassie Poirier, founded during Rodriguez’s sophomore year.

Rodriguez’s work involving First Gen E-M led to his recruitment as a core staff member for Orientation Week, which then sparked the idea to organise a lunch among first-generation students as well as inclusion training for orientation leaders.

Rodriguez and Poirier followed the lunch by inviting students and alumni of Emerson College to speak on a panel and discuss their experiences of being first-generation students.

Rodriguez said that being first-generation and low-income is often something that gets overlooked on campus and that few students beside Poirier and himself have been vocal about it.

“It definitely differs from student to student, but it can be alienating to identify as a first-generation, low-income student and have it go unrecognized,” Rodriguez said. “What we’re doing is changing that stigma.”

Christopher Grant, associate director of the Office of Student Success, sees events like the First Gen lunch as the college’s way of recognizing its diverse student body.

“We want to make sure you know that you have a place here,” Grant said. “We respect your experience, and we want to be able to address any issue that may come up during your time at Emerson.”

Grant said that events like the First Gen lunch are usually initiated by students who then receive support from Emerson faculty, adding that Rodriguez and Poirier approached the Office of Student Success hoping to help other first-generation students who were navigating the college experience alone.

“The idea behind it was to create a safe space for students who want to be able to talk about some of their concerns, find resources that will be able to help them, and simplify the process and recognize some of the pitfalls that can happen to students in the future,” Grant said.

The First Gen lunch was one of many events held during orientation week. Other events attracted specifically students of color, international students, and transfer students. Grant said planning orientation events for different minority groups can help students feel welcomed to the school.

“They all scaffold on each other, and there’s a lot of shared experience among all the groups.” Grant said.

During most of her career at Emerson, Poirier said she felt like she did not have a support system she could rely on. Providing first-generation, low-income students with emotional support was what drew her and Rodriguez to organize the event.

“The emotional resource of having people who have been there before and who are going through it is so important for first-generation, low-income students,” Poirier said.

Sophomore orientation leader Jade Lopez attended the event as a first-generation student. Coming from a single-income household with eight siblings, Lopez said being a low-income college student causes her to deal with struggles differently from other Emerson students.

Despite recognizing the increase in the financial aid budget for 2019, Lopez said she has yet to see the college providing financial support to returning students.

“We’ve already dedicated our lives to the school,” Lopez said. “It’s unfair that we don’t have a fallback, and it’s difficult being here and not feeling like you have the support needed.”

Poirier said that the organization plans to continue to establish programs at Emerson to help first-generation, low-income students receive resources and support from the college.

“This semester, we’re working with the Office of Student Success to create something called FLI [at] Emerson where we’re going to tackle things like financial resources,” Poirier said. “We’re hoping to eventually have a physical space for first-generation, low-income students to go to receive the support they need.”

“This is a great way for students to understand what they currently have for loans, scholarships, and what they’re paying for tuition, board, and other fees,” Grant said. “It’s about continuing to be transparent about the money that students have to spend.”

Lopez said that she hopes to see more resources go to expanding financial aid at Emerson, adding that resources like Money Matters are not as widely advertised as other clubs and organizations at Emerson.

“If you want to find organizations or resources that help low-income students, you have to search deep into the Emerson page,” Lopez said. “It’s not just something that pops up.”

Poirier said the frustration at Emerson’s limited resources for first-generation, low-income students resonated with her.

“When you can’t advocate for yourself, that’s when a program like First Gen E-M is really helpful because you have a group of people that will help do it for you,” Poirier said.