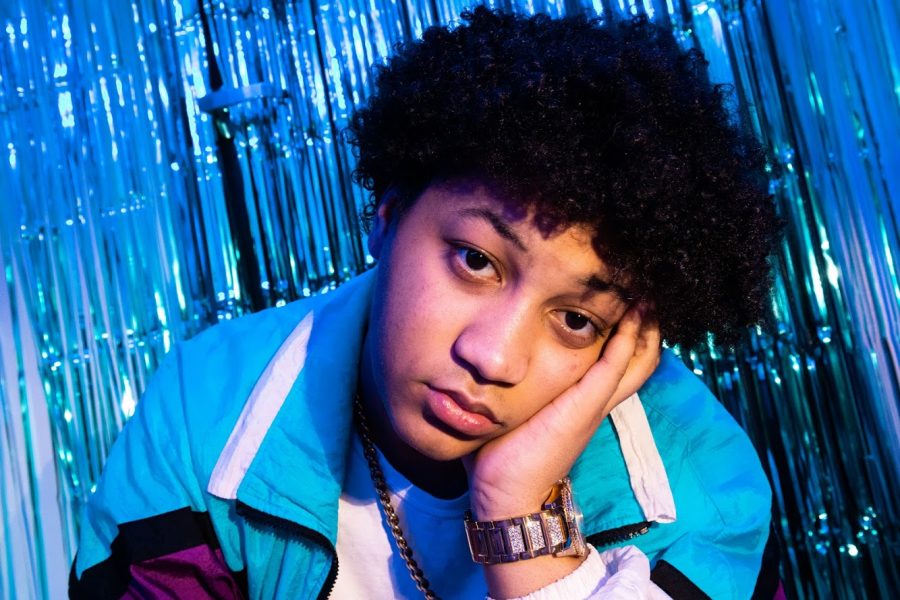 After being rejected for a job at Staples three years ago, rising junior Ademir Monteiro did what any rejected applicant would do—write a diss track about the company.

As he continued to write songs for fun with his friends, Monteiro slowly realized how much he genuinely enjoyed creating music. What started out as a joke evolved into a serious passion and the beginning of his music career.

Monteiro released on May 1 his debut alternative rap album Everything is Good? under his stage name, Ademir. As of June 14, the album—which features 11 tracks themed around socialization and self-evaluation—has 1,226 streams on Spotify. The album is also available on all major streaming platforms, as well as Soundcloud and Bandcamp.

“I noticed at Emerson, I’ve had conversations like that…kind of go the same way,” Monteiro said in a phone interview from Brockton. “It’s very cookie cutter. Everyone says they’re doing well, everyone’s like ‘Oh I’m good. I’m a little bit stressed but…I’m making it through’ and stuff like that. So [the album] just kind of [looks] at that interaction of being like ‘Why? Why do we default to being good around other people so often?’”

The album opens with a dialogue between him and a friend showing this default interaction. The album progresses with a melancholy tone while diving into self-reflection and the response to the basic “Hey, how are you?” greeting. Monteiro said he incorporated musical elements of Kendrick Lamar, Kanye West, Chance the Rapper, and Childish Gambino and put his own spin on it within the album.

Dani Jean-Baptiste, rising senior and president of Hip Hop Society, said she could relate to the album’s concept.

“It definitely resonates really [heavily] with me. It’s kind of hard to tell how you really are because [from] a socio-political stance, anything happens on a daily basis that can kind of throw the mood out of whack,” Jean-Baptiste said in a phone interview from Chicago, Illinois. “I think it’s really important to start off a debut album with this self-reflection, and he’s trying to show everybody who he is and then also dissect how he is. I think he did a really good job of it.”

Monteiro began writing the songs in January 2019 but was initially writing them for an EP that would focus on the balance between introversion and extroversion within people. He said that he felt this concept would restrict his approach and structuring of the EP.

In late July 2019, he decided to focus the concept on how people interact and make an album instead of an EP. In fall 2019, he had decided on the album title Everything is Good?

“[By] throwing the question mark on it…you can change who’s saying it and what context and it still works,” Monteiro said. “It can be someone asking ‘everything’s good?’ or it can be sort of…when you’re looking into yourself being like ‘everything’s…good?’; I think it matches on a lot of different perspectives.”

In fall 2019, Monteiro reached out to some of his friends at Emerson—rising junior Thomas Chadwick, rising junior Andrew Willoughby, and rising senior John Talbot—to collaborate on beats for what became the songs Star, Barbershop, and 19. Over winter break, he recorded demos of each song, and in January 2020, he sought feedback from his friends and fellow members of Hip Hop Society.

After hearing the demos and the album concept, Talbot said he reached out to Monteiro about recording the entire album with WERS, where Talbot works as an audio engineer, and offered to master the album for him as well.

“I wanted to be involved in the project as soon as I heard the concept,” Talbot said in a phone interview from Charlotte, North Carolina. “I don’t really hear a lot of music that kind of talks about the life of a college student and I hadn’t heard material that was so personal in general, but also from him before.”

In spring 2020 Monteiro, Talbot, Chadwick, and Willoughby began producing and recording the album. Monteiro said he created rough demo mixes for the album in March while moving out of his dorm amidst the pandemic, then finalizes the mix in mid-April and sent them to Talbot for mastering before the album’s release in May.

Monteiro said he was most excited for people to hear the song 14, which he wrote about a low point in his life during his transition to a new high school at the age of 14. He said he was also nervous about releasing it because it is the most vulnerable he has ever been in a song.

“Going through any sort of depression doesn’t mean anybody is weak, it doesn’t mean anybody is less, it just means that we struggle in different ways. I wanted, for myself and for others, to just be like ‘Hey, that’s something we should all acknowledge within ourselves and be honest about ourselves,’” Monteiro said. “That’s what the song is really about, it’s just sort of looking at that perspective with today’s knowledge, but through a 14-year-old me’s lens.”

Talbot said the recording session for 14 was a little emotional, but that they were able to get great material out of it.

“The hard part was, near the end of the song there’s a part where he screams ‘I’m useless’ which is very powerful in the context of the song, but it’s really hard to scream ‘I’m useless’ out loud a bunch of times,” Talbot said. “Things got a little emotional in the studio, but we were able to get some great stuff out of the session so it was good. I was proud of him for doing that.”

Jean-Baptiste said her favorite song on the album is 19 because of the way it is sequenced on the album.

“It comes right after 14 which is a very emotional, pivotal track on the album, it’s definitely the lowest point on the album,” Jean-Baptiste said. “He manages to drag you out of this emotional pit so quickly, so easily, and in the most [Monteiro] way, so I really like it.”

Monteiro said he looks forward to performing the album in front of audiences in the future. He hopes that what people take away from the album is that a little honesty and introspection goes a long way.

“[I ended the album] on a note of like, sometimes you’re not gonna be good, that’s okay,” Monteiro said. “That doesn’t necessarily have to be something you tell the world, but it should definitely be a conversation you have with yourself. Just being honest with yourself I think, in the end, is what it all boils down to.”