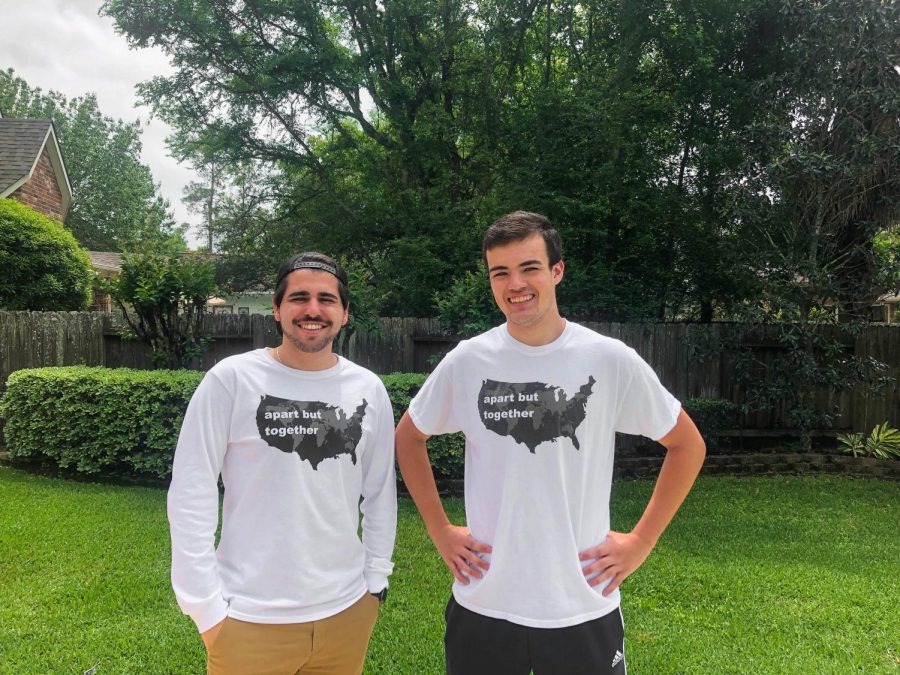 Juniors Christopher Rodriguez and Grant Rosado create a t-shirt company to help those suffering during the coronavirus outbreak.

Juniors Christopher Rodriguez and Grant Rosado lost their jobs, at a retail ski shop and dry cleaner respectively, after the COVID-19 pandemic caused non-essential businesses to shut down. Initially, they were upset, but then they started to think about the virus’ impact on people who relied on their weekly paycheck.

“If they’re losing their jobs, what would that mean to them?” Rodriguez said in a phone interview from Texas. “Here we can come back home to our parents who feed us, but what happens to the people who don’t have that safety net?”

On March 25, Rodriguez and Rosado created “Apart But Together,” a t-shirt company that donates all profits to people affected by the coronavirus outbreak. The two decided to donate the proceeds to United Way’s COVID-19 Community Response and Recovery Fund, which provides those in need with services like food and shelter.

“The message of our shirts ‘Apart but Together’ is that everyone in the world is doing their part, and the United Way coronavirus fund helps people globally and domestically, so we found that fit the theme of our shirts,” Rosado said in a phone interview from Texas.

The design on the t-shirts shows either a graphic of a country or a state in the United States, with a world map fitted inside the country or state. They have sold 69 shirts and raised over $1,500, with each t-shirt running about $34.99. Their goal is to sell 1,000 t-shirts domestically, but they hope to move internationally in the future.

“We knew we wanted to send a message that was unifying in isolating times and that’s why we came up with ‘Apart But Together,’” Rodriguez said.

Rodriguez said they were inspired to create t-shirts by previous Emerson students who created a t-shirt campaign in 2013 in response to the Boston Marathon bombings. Their t-shirt campaign, which they named “Boston Strong,” raised more than $500,000 for the victims and their families while also becoming the signature slogan for the city’s recovery.

“It could have been anything but we just thought Emerson Pride could be like a staple of our school, showing how our school comes together in hard times,” Rodriguez said.

Rodriguez and Rosado created the t-shirt design, website, and they handle shipping. They use various printing companies, including Woodlands Spring Printing in Texas, to outsource production.

Their team consists of the two of them, but they also receive some help from Rosado’s younger brother, Jack. They are hoping to gain support from friends in the Emerson community. Rosado said he hopes people will serve as ambassadors and information about the company within their own communities. It also is helpful for speaking to news stations that report on the t-shirt company and want a local angle for their stories.

“People want a local story so we try to expand where we are everywhere so that it reaches more people,” Rodriguez said.

The project has been featured on networks like ABC and Fox News with various Emerson professors and faculty members reaching out to news organizations for more publicity.

Rodriguez said in creating this project, he drew from his experience in the Emerson entrepreneurship minor, which one of the Boston Strong creators, Chris Dobens’ 16, was also a part of. Over the course of a school year, students within the minor create and launch a company.

“When we started this t-shirt thing, it was a very different experience because you’re putting a lot of those tools together, but [Rosado] and I are not keeping any of the profit that we make from the shirts,” Rodriguez said. “So it’s a very different sort of reward that you feel.”

Director of the Entrepreneurial Studies minor and Rodriguez’s professor, Lu Ann Reeb, said that Rodriguez shows real entrepreneurial spirit by seeing a problem and feeling compelled to address it with a solution.

“I’m very, very proud of them and the entire Emerson community should be proud of them,” Reeb said. “Two college students who are suffering the same consequences all of the rest of us are in terms of being isolated and social distancing thought, ‘Hey what can we do?’ Even if it’s just a website with t-shirts, you can get a lot of attention.”

Reeb said that the trend of students within the minor creating these projects, like “Apart But Together” and “Boston Strong,” comes from students seeking to make a difference and possessing the necessary skills to carry out their plans.

After observing the development of “Boston Strong” and “Apart But Together,” Reeb said she notices students within the entrepreneurial studies find success because of their willingness to make a difference.

“I think it speaks really to the Emersonian DNA,” Reeb said. “When you combine the entrepreneurial spirit and the Emerson DNA, that’s pretty powerful.”