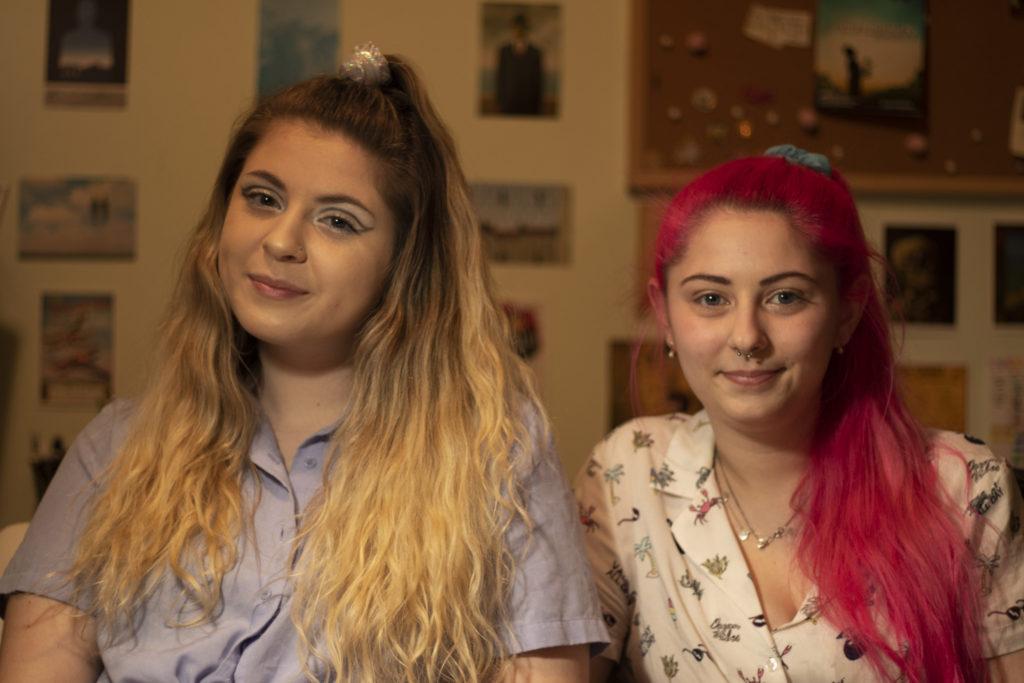 Juniors Emilie Krone and Liza Rogulina toyed with the idea of producing their own publication since meeting freshman year during an Introduction to College Writing class.

The pair sat on the idea for two-and-a-half years but finally decided to start working on the “zine” this spring after feeling motivated by support from their friends and figuring out how to fit the production into their schedule.

“We’d have craft days where we used to just make collages and art for hours during freshman year, so I think our zine stemmed from that,” Krone said in an interview.

Krone said a zine is typically produced by a self-publisher, as opposed to a typical magazine printed by a company. She said she introduced Rogulina to zine publications for the first time when Krone decided to use them as the subject for one of their class essays.

From there, they began exploring the concept and eventually committed to officially starting their publication over winter break in 2018.

“I feel like a zine isn’t the same as a magazine in that a magazine is a lot more formal,” Krone said. “A magazine would typically be more censored. It’s up to us what we want to put in it.”

“We just mesh really well, I think,” Krone said. “I don’t think I’ve ever turned in a piece of writing for a fiction class that I haven’t made [Rogulina] read and vice versa.”

Rogulina said it took them three weeks to create the first issue. She and Krone released their 18-page first edition in February on Issuu, a free online platform that makes publications electronically accessible. The publication is also available on the rk.zine website where they also offer the option to submit content. Rogulina and Krone already published two issues and are taking submissions for the third issue.

The pair honed their editing and publication skills while working on the Kasteel Well literary magazine Black Swan last year in the Netherlands. Rogulina and Krone also serve as art director and assistant living editor respectively on the Your Mag editorial board.

“We wanted to do something ourselves apart from publications that already exist,” Rogulina said. “We wanted an opportunity to practice our skills like copyediting and design. We also just wanted to have fun and have something cute that we could make together.”

Rogulina and Krone live off campus together and primarily work on the zine from their couch at home.

“It’s completely different trying to create something on your own from the ground up with very little outside help,” Rogulina said. “If I don’t know how to do something on [Adobe] InDesign, I have to figure it out.“

Krone and Rogulina also included their own work in the zine. Rogulina, a visual and media arts major, contributes her own colorful graphics in every issue. Krone, a creative writing major, included her poetry in the last two issues and copy-edits the zine before publication.

They started advertising for submissions at the beginning of the semester on the zine’s social media accounts and through word-of-mouth. So far, Krone said submissions have mainly come from friends. Their other two roommates, juniors Haley Cohen and Erin Nolan, are frequent contributors.

“I’ve been really surprised about how many people post about it or share it on their Instagram,” Krone said. “I get texts all the time from people saying, ‘Hey, I met this really cool person and I told them they should submit to your zine!’”

Cohen submitted a non-fiction piece, “‘Choose Your Own Adventure,” that was featured in rk.’s latest issue.

“[Rogulina and Krone are] both so talented, and they both wanted to do it for so long,” Cohen said. “I know that it was kind of a dream of theirs. Both editions so far have looked super awesome.”

Although Emerson students contribute to rk., the zine is not exclusive to Emerson students. The second issue includes submissions from artists across the U.S. and even England. Rogulina said they have no intention to make rk. Emerson-affiliated.

“We don’t want funding from the school because we don’t want it taken from our hands after we graduate,” Rogulina said.

For now, the zine is entirely online, Krone said. They hope to expand the publication to print but don’t have the resources to do so yet. If the zine generates enough support in the future, Krone and Rogulina would be open to starting a GoFundMe to raise funds, Krone said.

Krone and Rogulina recently decided to start enforcing a theme for each issue, starting with the third issue, which will be “growth.”

“I think it can be represented like springtime and flowers or emotional growth,” Rogulina said. “It has a lot of connotations.”

Rogulina says they plan on introducing new elements to the zine in the next issue that they haven’t tried before, such as including editorials and photoshoots. She said they want their publication to push past the stereotype that zines have to be “artsy” or “serious.”

“I would publish a comedic piece and a sad piece in the same issue,” Rogulina said. “That’s the whole point of a zine. It doesn’t have to be anything.”

Krone and Rogulina plan to continue working on rk. throughout the summer, the first time they’ll be apart since starting the zine. Krone lives in California and Rogulina lives in Connecticut, where they will each respectively spend their summer breaks.

“We just want people to write or make whatever type of art they want,” Krone said. “We don’t want to push people in one direction. We just want to see what people have to share and lift that up and give it a platform.”