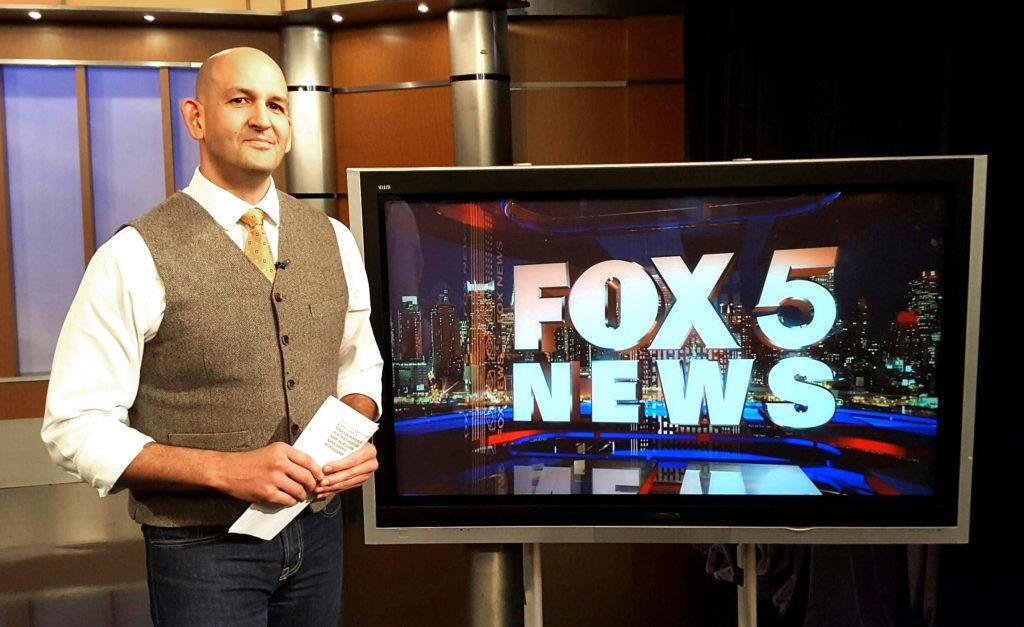 John Karalis ‘96 pursued his dream job of covering basketball and used his prior experience as a broadcast journalist at Emerson to become a beat writer for MassLive.com, where he reports on the Boston Celtics.

Karalis travels with the NBA team, interviews players during practices, and writes game recaps and analytical articles for MassLive.com. Karalis played basketball for Shea High School in the ‘90s in Pawtucket, Rhode Island before joining Emerson’s men’s basketball team as a guard, where he holds the record for most rebounds in program history and ranks seventh for career points with 1,454.

Karalis graduated from Emerson with a degree in mass communications and briefly continued his basketball career in Greece, where he became the first Emerson alumnus to play at a professional level.

Karalis’ passion was basketball, but he said he chose to pursue a career in television because he would likely earn a larger paycheck than if he chose to cover basketball as a beat. This career path would also allow him to use his strengths in communication.

“I knew my strengths were within my personality,” Karalis said. “I was an outgoing person. I had the ability to communicate with people without fear or being nervous. I knew that this would be my future.”

While at Emerson, Karalis worked for Emerson Independent Video as a sports anchor. He said EIV helped him learn the ropes of television while giving him an opportunity to learn from mistakes.

“This is where you are going to hone your craft, make mistakes, and go over those mistakes with an instructor,” Karalis said. “Whenever you make a mistake, you’re not on air, which takes some pressure off. I’m glad I made those mistakes in college, so in the real world I am more familiar with situations I can handle better.”

Karalis said he first took these experiences into the real world with WHDH 7, a television station in Boston he interned with while at Emerson. Michael Raush, a colleague of his at WHDH 7, said Karalis brought versatility to the station.

“He was a fast learner as a writer and enjoyed the challenge of overseeing the entire newscast—selecting stories, placing them in a rundown, choosing video [footage], managing the control room staff—as opposed to just writing copy for in-studio anchors and field reporters,” Rausch said.

Karalis said working in the news business forced him to adapt when he became a producer at WBZ-TV in Boston and began working on the 5 a.m. newscast.

“Some of it got boring,” Karalis said. “Some of it got extremely hectic because a lot of the time, breaking news happens in the morning. There’s such a small crew, and this forces you to think on your feet.”

After working on the 5 a.m. newscast, Karalis became an executive producer and managing editor for WBZ-TV.

In 2010, Karalis began producing content for WNBC and FOX 5. At FOX 5, he worked with Emmy Award-winning news anchor Ernie Anastos on the 6 p.m. newscast, which focused on delivering positive stories to their audience.

“We were doing a show in a traditional, hard news slot,” Karalis said. “You have to deliver on people’s expectation for that time slot. We had to find a balance between covering the news of the day and delivering the vision. The positive spin on the show was that we provided a lot of information on the most important stories, which means the audience was more informed. If there is a problem within the story, we would try to present solutions to that problem.”

Karalis said he and Anastos faced difficulty when deciding which stories to cover on the show. However, their agreement on what stories to include in the newscast made the show successful.

“What made that show really interesting was finding a way to work together and find a happy medium between two people with differing ideas with what the program was supposed to be about,” Karalis said. “We would find that happy medium that made the show good.”

In 2017, Karalis decided to pursue his dream career of reporting on the Boston Celtics.

“[Basketball]’s my passion,” Karalis said. “Basketball is my life. It has given me everything positive in my life. I am at home on a basketball court.”

Karalis decided to move on from news producing because of his frustration with political coverage on television.

“After a while, producing news was bad for my health,” Karalis said. “Everything I saw on TV was killing me inside.”

Karalis had been producing content about the Celtics on his personal blog and podcast about since 2015. After developing this experience, he decided to try and pursue basketball reporting as a full-time job. He said he could fall back onto producing shows on news channels, but he wanted to give this career change a shot.

Karalis said even though the job might be difficult, he enjoys having constant contact with the Celtics.

“Travel has sucked,” Karalis said. “[The airport] loses my bag, I spend a couple of days getting only 3 hours of sleep. The grind of being on the beat and covering a team can be a lot, but I’m going to UCLA in 20 minutes to go watch the Celtics practice and talk to them. I am one of the few people who gets to do that.”

Karalis said he would love to bring a video element into his sports coverage. This would allow him to apply his level of expertise to his passion. He is currently working on making this a reality with MassLive.com.

Karalis discussed the difficulties he experienced within the field, especially when a change in management occurs.

“Above all else, know this,” Karalis said. “Loyalty does not exist in professional sports. Teams will trade players when they are no longer useful, players will leave or request a trade when they are not happy, and this applies to the outlets where you cover those sports.”

Karalis said aspiring journalists should not be afraid to pursue their passion.

“While you’re young and broke, embrace being broke and follow your passion,” Karalis said. “Don’t chase paychecks because you will get caught in the grind of getting that next pay raise and end up in a job that is not fulfilling.”