Kasteel Well students to return to Boston after outbreak of Coronavirus 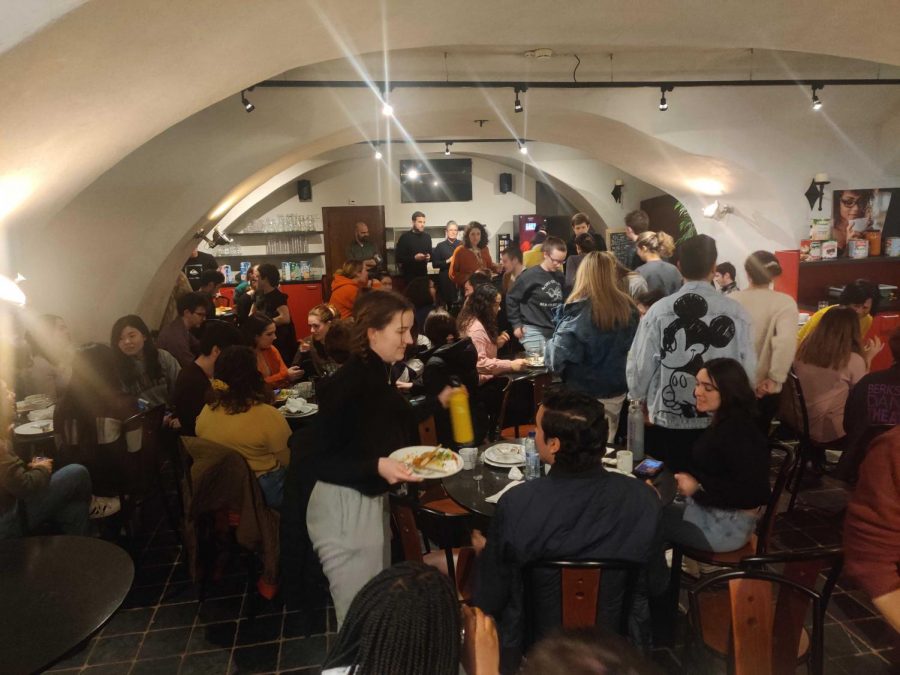 The college gathered all Kasteel Well students in the dining hall Monday evening to announce the cancellation of the program.

By Lara Hill and Katie Redefer

WELL, NETHERLANDS—The college will send Kasteel Well students back to the Boston campus later this week due to the rapid increase in COVID-19 cases, commonly known as Coronavirus, throughout Europe, Kasteel Well Executive Director Dulcia Meijers said in a meeting with students on Monday evening.

Flights back to Boston for the 81 castle students have not been booked yet, but Kasteel Well senior staff are looking at one or more flight options to return students back to the United States as soon as possible, Meijers said.

As of Monday, there are 1,128 reported cases and 29 deaths in Italy and 7 reported cases in the Netherlands, according to the World Health Organization. The Coronavirus first arrived in Tilburg, Netherlands on Feb. 27, Aljazeera reported.

All Kasteel Well students are guaranteed housing and meal plans on campus at no additional cost upon returning to Boston, according to Meijers. The Office of Housing and Residence Education sent out an email to castle students following Monday’s meeting asking their housing preferences. The email said they will attempt to accommodate student preferences for housing to their best ability, although there are no single rooms available.

Vice President and Dean of Campus Life James Hoppe told The Beacon Monday the college has enough room to house the students returning from the castle.

Classes and midterms at the castle are currently suspended awaiting students arrival to the Boston campus. According to Meijers, midterms are expected to resume at the Boston campus on March 11 and regular classes will resume on March 16. Meijers said that these dates could be subject to change while the college organizes how classes will proceed.

Meijers said the college intends to use video conferencing application Zoom to facilitate classes, which will allow castle professors to video chat with castle students during times that are yet to be decided. Classes are expected to end as scheduled under the Kasteel Well calendar, assuming there are no further setbacks in planning class arrangements.

The college previously canceled an academic excursion for Kasteel Well students to Milan, Italy scheduled for March 6-9 and restricted travel to the Netherlands for spring break.

After the cancelation of the Milan trip, Meijers said she and other senior administrators planned to send students to cities within the Netherlands and near the Dutch border to make up for the lost academic hours, assuming the planned locations remained safe for travel. But as COIVD-19 continued to spread across Europe, Meijers said officials became concerned about the possibility of countries closing their borders.

“Out of total precaution, we would prefer to get you back to the home campus sooner rather than later, since we know that the travel from the Netherlands to the United States is fully open,” Meijers said. “The infection is in the Netherlands. It is very contained, minimal, minor, but still from one, you get two, you get four. It’s a precautionary decision for everyone’s health and safety.”

When deciding to send students back to the Boston campus, Meijers said her main priority resided with student safety.

“We’ve taken into account, how can we make the students finish a term of the academic program, which was priority number two,” Meijers said. “First, your safety and your health and well being. Secondly, how to finish the courses. And with the help of technology nowadays, we think we can make it happen. So we’re planning on it. We’re also counting on assistance from faculty on the whole campus.”

Senior Advisor for Student Affairs Tikesha Morgan will accompany students back to Boston and will remain there for at least two and a half weeks, according to Meijers.

Despite the outbreak, the college is still planning to run two five-week summer programs at the castle where students can earn eight credits. One starts May 15 and the other starts July 3. Meijers said she encourages students to apply to these programs if they wish to return to the castle.

Many students expressed frustration with the circumstances and the early cancellation of the Kasteel Well program at Monday’s meeting. Sophomore Kasteel Well student Allie Rothfield said she wishes the program could continue.

“I really loved being here,” Rothfield said in an interview with The Beacon. “This has probably been my favorite semester at Emerson so far. I’m heartbroken that we have to go back.”

Junior Kasteel Well student Marco Amendola said he will miss the power and influence of student voices at the castle.

“All of the faculty members in the castle made me feel that this was the first place where people really cared,” Marco Amendola said in an interview with The Beacon. “I love everyone here. And honestly, that’s gonna be one of the biggest things I miss about being here. Back on the Boston campus, I kind of feel like I lose that voice in that space. I have that voice here.”

Despite the uncertainty regarding the rest of the semester, Rothfield said she will miss the supportive environment that developed at the castle.

This article was updated to include more information from Dulcia Meijers and from students.