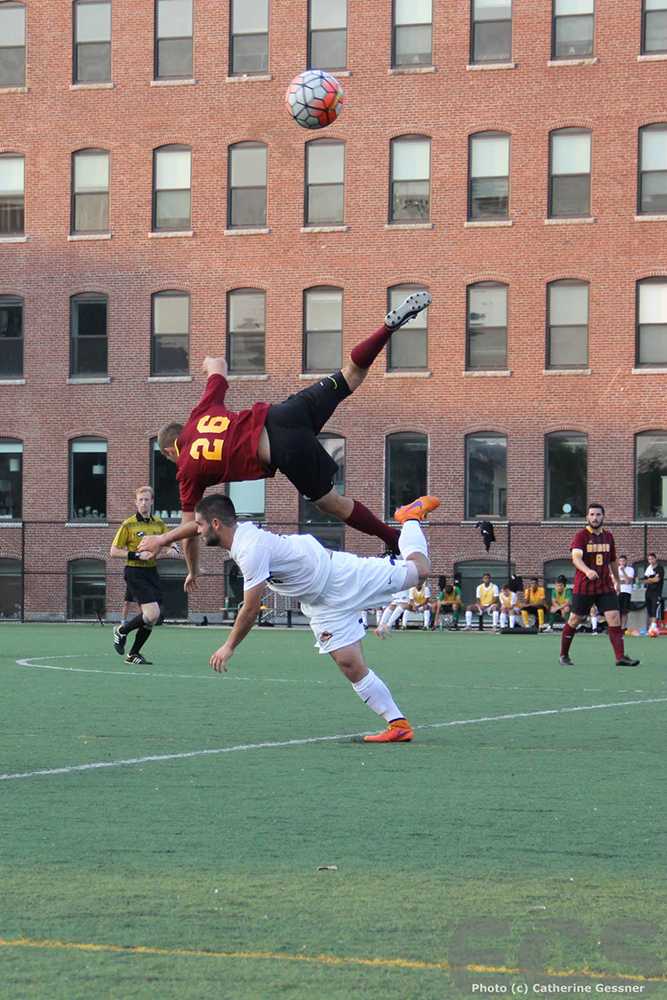 Since before the regular season began in early September, Emerson men’s soccer coach Javier Mejia has not had a full squad. Injuries have piled up, and at one point this year, the team was missing six starters.

It has been a knee-heavy injury year for the men’s soccer team, according to Mandy Nicoles, head athletic trainer.

The Lions have had to deal with three ACL tears, one MCL and patellar injury, and others that have kept starters off the field.

“It’s difficult to deal with things that are completely out of our control,” Mejia said. “There’s no way to predict who’s going to get hurt and when.”

Junior midfielder Elias Romanos was the first player injured this season when he tore an ACL in a scrimmage against Wentworth Institute on Aug. 25, according to Mejia. About five minutes later, senior back Ryan Carino suffered a partially torn MCL, a dislocated patella, and a strained ACL, as well as torn ligaments in his knee and bruising of those bones.

“It was the most excruciating pain I’ve ever felt in my life,” Carino, a marketing communication major, said. “I knew something had torn, [but] I was just hoping it wasn’t the ACL.”

Luckily for Carino, it wasn’t his ACL, and it wasn’t his season. However, he did miss a month of soccer, including the first seven games of the regular season. During that time, he spent five to six days a week rehabilitating his knee in one to two hour sessions.

Carino was back in action on Sept. 26 in the team’s loss against Springfield College with a limit on his playing time.

“The only reason he has a minutes cap is because he’s just not fit enough to play ninety minutes,” Nicoles said. “If I didn’t give him a minutes cap and he went out and tried to play [longer], at probably 30 minutes he would be so fatigued that his muscles wouldn’t be able to protect his knee.”

Carino said he understands the precaution.

“I’d rather play as many minutes as possible [under the cap] every game than play two full games and re-injure myself,” Carino said.

Since his return, Carino’s minutes have steadily increased, and he said he hopes he’ll be able to play a full game by the end of the season.

“I want to get back to starting, like I did last year,” Carino said. “It’s been tough coming off the bench.”

The team’s second major injury came in its match against Lesley in mid-September. Already missing half a dozen starters, the team’s only captain, senior back Mitch Lapierre, was also lost for the season when he tore his ACL.

“It’s such a common injury,” Mejia said. “It happens all the time. You almost expect it’s going to happen to somebody.”

The team has also missed junior midfielder Evan Eubanks from competition, as he is recovering from an ACL tear suffered last season. Senior back Matt Zani was out two weeks and missed the Lesley and MIT matches with a hip flexor injury.

The Lions have lost four out of their last five matches and are winless in the New England Women’s and Men’s Athletic Conference, with a 4-7 overall record this season.

However, Mejia doesn’t want to blame all of this season on the inactives.

“One would think things might be a little different if we were healthy, but it’s certainly not an excuse,” Mejia said. “It would help to have them, but that’s not the only reason we’ve been struggling.”

Despite all the injuries received this year, Mejia said he has been amazed with the spirit his team has continued to show all season.

“Morale is actually higher than I would expect it to be for a team’s that’s dealt with a lot of [injuries],” Mejia said. “I’ve been pleasantly surprised by how much confidence the players have in each other and in what we’re trying to do.”