Knight shines in the offensive spotlight 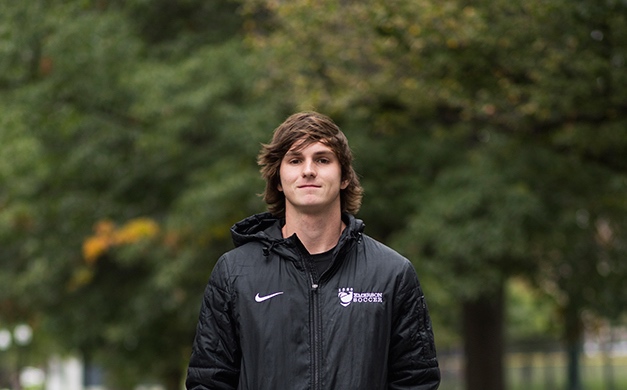 For men’s soccer player Dan Knight, earning a starting role this year was a no-brainer. As a senior, the three-year substitute was one of the most experienced athletes on the team heading into the season. He expected to be on the pitch at the start of every match of 2015.

“Everyone who was ahead of me in line had graduated,” Knight said. “So it was looking  like it was my time to start.”

Knight hasn’t just started every game—he’s been scoring as well, more than anybody else on the team.

In 13 games this year, Knight has eight goals for the Lions and ranks third in the New England Women’s and Men’s Athletic Conference in that category. The forward’s goals also make up over half of the team’s total count for the season.

“He has a very good offensive mindset,” senior goalkeeper Carter Bowers said. “He’s always looking to score a goal and be a part of anything that’s going to help start one.”

Knight attends the Berklee College of Music as an electronic production and design major. Berklee does not have an athletic program but gives students the opportunity to play for Emerson through an NCAA-approved consortium.

Knight said his performance this season comes after three years of struggle.

Coming off the bench as a freshman in 2012, Knight was unable to score in five shots on goal and eight total. In the same role sophomore year, he suffered a high ankle sprain while warming up before the team’s first match, causing him to miss half of that season. Knight notched his first career goal against Fisher College after returning from the injury the same year.

“You have to make an impact to get a spot,” Knight said. “But not being a starter makes it a lot tougher to make that impact.”

As a junior, he started his first and only match of the season against Wheaton College and, after being substituted into a game against Eastern Nazarene College, netted the game winning goal unassisted in the first minute of overtime.

Teammate Warren Backman, a sophomore back, said he and a lot of the team felt Knight was not getting the playtime he deserved.

“We didn’t really get it,” Backman, a visual and media arts major, said. “There’s nothing worse than going to practice, working hard, being part of the team, and then once game time comes and you’re excited and ready to play, you’re sitting on the bench and just having to watch and not be able to do anything.”

Knight’s new role came at a time of transition for the men’s soccer team. Emerson graduated five seniors last year, welcomed a new coach this year, and Knight was picked for a starting job.

“He did a great job letting [not starting] fuel him,” Bowers, a journalism major, said. “I think it’s helped a lot with his success.”

Knight recorded the first Lions goal of the 2015 season in a Sept. 2 loss to Regis College. Four games later, after being down 1-0 early against Lesley University on Sept. 16, Knight found the back of the net twice and brought Emerson the 2-1 victory.

It wasn’t until after the Lesley match that Knight said he felt his starting role was locked in for the season.

“It could have been different had I come in and not performed,” Knight said. “There are plenty of guys who could have put me out of a spot if I hadn’t been scoring goals.”

On Oct. 5, against rival Suffolk University, Knight tallied his third career game winner when he scored his second goal of the contest in overtime to win 3-2.

“I felt like the man [my teammates] looked to to be scoring goals,” Knight said of the win. “I was able to move on from that [match] and go on to each game expecting to score.”

Above all, Backman said he is impressed with Knight’s determination over the course of his career in finally earning a starting role.

“Not starting for three years would’ve definitely hurt anyone’s confidence and deteriorated them to the point where they might want to quit or have lost their passion for the game,” Backman said. “But he’s someone who always believed in his ability that eventually he would be able to make that breakthrough.”

Editor-in-chief Claire Nobles, a friend of Knight, did not edit or contribute to this report.