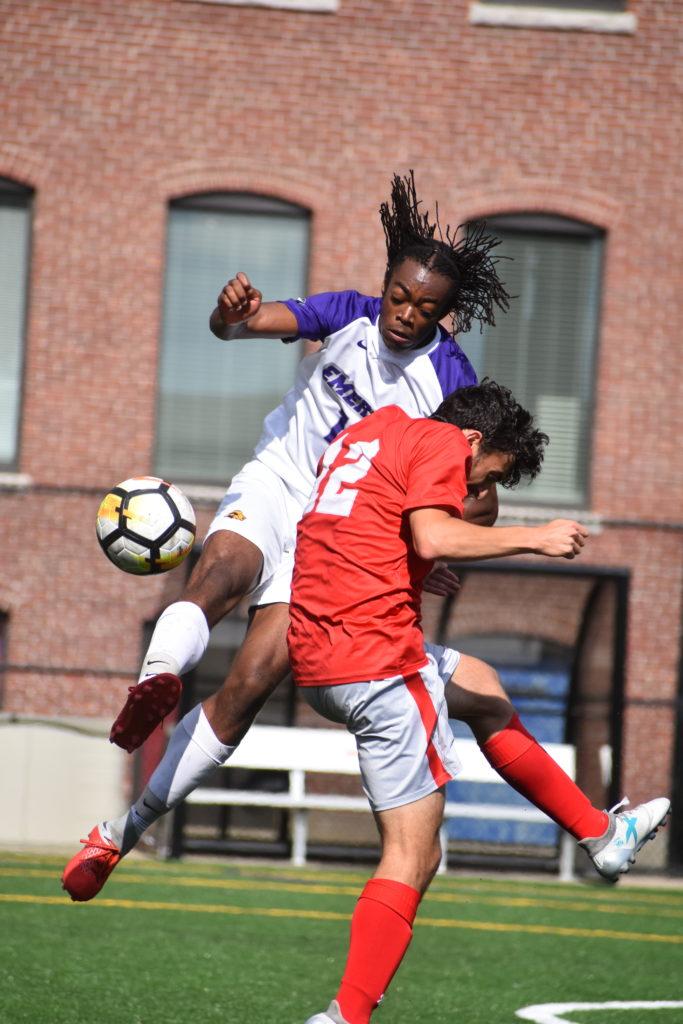 The men’s soccer team lost to Worchester Polytechnic Institute 1-0 after conceding in the final minute of the game Saturday afternoon.

Head coach Bryan Harkin said that, despite the loss, his team played a strong game against a tough opponent—WPI is the reigning New England Women’s and Men’s Athletic Conference champion.

“They just have to know that they played really well and went toe to toe against the conference champions,” Harkin said. “It just comes down to one or two moments in the game and the execution. There really isn’t much you can say other than, ‘It’s one game, you own it, you learn from it, and you move on from it.’”

WPI’s Mark Calnan broke the deadlock between the two sides with 46 seconds remaining in the second half as he slotted a shot past Emerson goalkeeper David Kemp. Prior to Calnan’s late goal, both sides found themselves locked in a defensive stalemate, with neither team able to produce meaningful offensive chances until the final minutes.

Kemp—fresh from winning NEWMAC defensive player of the week—led the way for the Lions with nine saves on 10 shots. The sophomore shot-stopper made several key saves to keep Emerson in the game, including a point-blank save on WPI’s Matt Mulligan in the 88th minute.

“David was great in all aspects of the game,” he said. “His kicking was great, his shape was good, and he put us in a good position to win the game, but unfortunately that [goal] happened. Having David as our rock back there—he gives us the chance to win every game, and that was visible today.”

Despite the final scoreline, the Lions looked sharp on the defensive side of the ball throughout the game, with Dorfman and freshmen defenders Darius Boamah and Ryan Anderson making important defensive plays.

On the offensive side, sophomore Arturo Ruiz drew three fouls during the game as WPI tried to contain him on the wing.

Dorfman said the team’s newcomers stood out to him in the game.

“Against the conference champions, it’s not that easy to come on as a sub and be ready to contribute, but I think they did a great job of helping give us a chance to win this game,” Dorfman said. “Whatever their role was, I think they stepped up and were ready to go.”

Harkin said that, in the end, the team’s little mistakes late in the game cost them the win.

“We had a little bit of naïveté and inexperience at the end of the game,” Harkin said. “We can’t be giving up chances with 45 seconds left on the clock, and [we] maybe had one or two too many guys forward. [In the future] we can certainly be more buttoned up on our set plays and our ability to execute in the final third.”

With this defeat, the Lions are now 1-2 in the NEWMAC and sit in seventh place.

Dorfman said this game shows that Emerson can compete with some of the conference’s best teams.

“[WPI] is the defending conference champion, and I think that we showed we can hang with them or anyone in the league,” Dorfman said.

Harkin said, despite the final result, he’s proud of the way the team played.

“It was a good performance and it was hard to fall on the wrong side of it, but you live and you learn,” Harkin said. “We’re still right in the mix in conference [which is] where we want to be.”

The Lions next face off against Eastern Nazarene College in a non-conference matchup at home on Oct. 1 before returning to an Oct. 6 NEWMAC play against Babson College on the road.