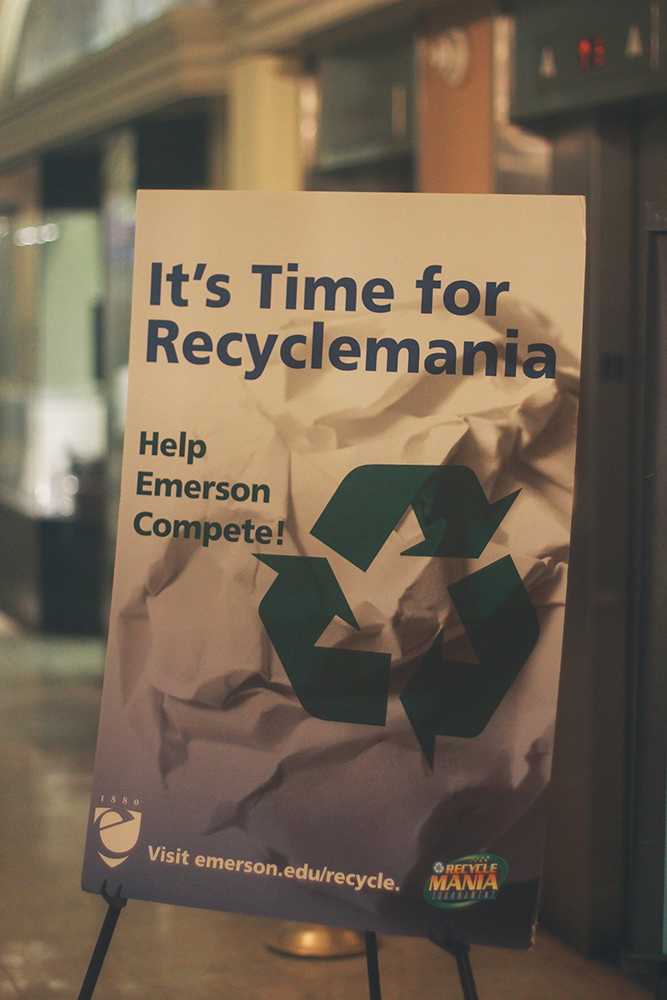 Last year marked Emerson’s second official involvement in RecylceMania, an eight-week nationwide recycling competition in which over 460 colleges participate in.  This time around Emerson hopes to come back stronger by nearly doubling their percentage of recycling compost, from 17 to 25 percent, said RecycleMania co-chair Nancy Howell, the copy editor for Creative Services.

“Every generation has its issues, however, unlike apartheid, the protest of Vietnam War, or gay marriage, this issue of environmentalism will not go away because it is independent of politics,” said Eric Van Vlandren, the recently hired Campus Sustainability Coordinator.

Van Vlandren said that while doubling the recycling compost rate sounds like a tough feat, he prefers to think of it as increasing the diversion rate of the compost in relation to the total waste. He said that many things that are recyclable are being placed in the waste stream. Ergo, through conscious decision-making while separating recyclables from wastes, the recyclable rate will naturally go up as the waste rate goes down.

This is where EcoReps come in play. Emerson welcomed EcoReps to campus this year through work-study and Emerson employment.  Emerson has seven undergraduate students and one graduate student EcoReps. The group is planning to host a program where students can trade in their old light bulbs for LED light bulbs that use 70 percent less power and also last 20 years, according to EcoRep Kyo Hoon Jung.

“We are peer-to-peer environmental educators, [and] we understand that each generation has their own views,” said the freshman visual and media arts major.

Jon Satriale, the advisor for the recognized student organization Earth Emerson, was the person who signed Emerson up two years ago, according to Howell. However, according to Howell, the first year included very minimum involvement — it was just our step into the game, he said.

This year the bar has been raised higher by Van Vlandren, who is an Emerson alumnus from the class of 1990.

According to Vlandren, students at tables outside of the dining hall will be informing others of all the various materials that can be recycled at Emerson. The students will also supply anyone who is interested “pledge letters” as further advocacy for joining the recycling movement. Weekly raffles will be held for any pledges, with prizes being things like chocolate bars or a bag of coffee beans.

Furthermore, in an effort to reach the goal of 25 percent recycling compost, Emerson has given all its residential assistants a presentation on what RecycleMania entails in the beginning of the year.  The aim is for the residential assistants to be cognizant of this eight-week event and promote it to their residents, according to Howell.

“The goal is to build as much awareness as possible about recycling at Emerson for all students, faculty, and staff,” said Howell.

RecyleMania runs until March 29. Van Vlandren said that ultimately, his dream for RecycleMania at Emerson is to no longer need the event to be environmentally friendly.

“In five years,” he said, “I want Emerson’s students and faculty to be so engaged in recycling that we no longer need this crutch.”