Learning to love both of my “faces” 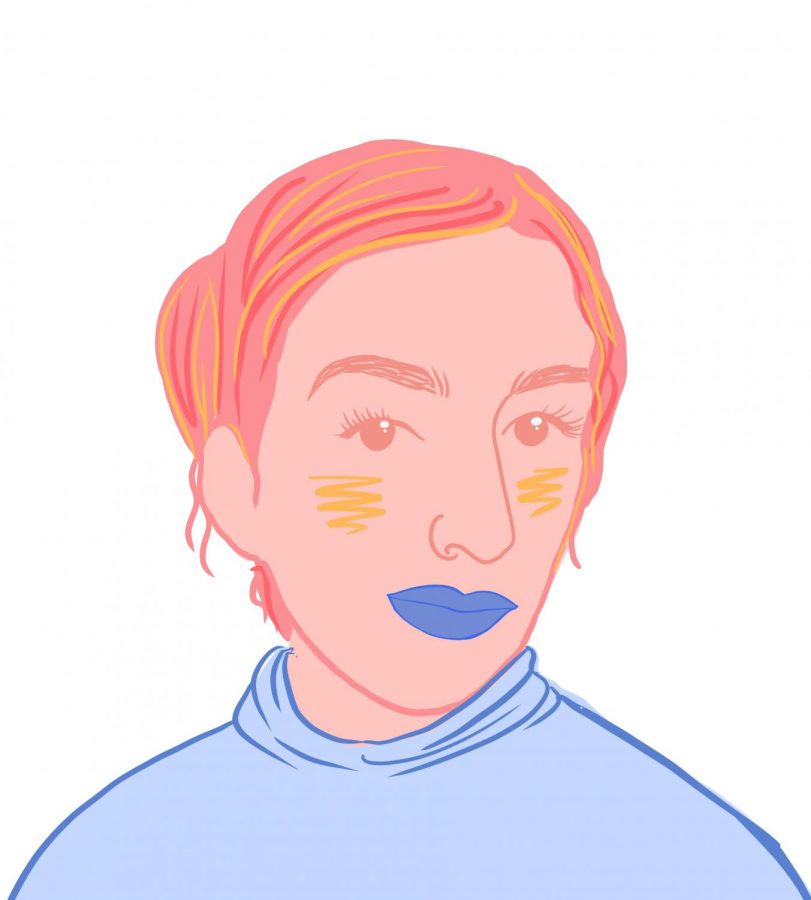 When I look in the mirror, I don’t recognize the face that looks back at me as completely “mine.”

Of course, I know it’s my face. I’ve never undergone any sort of cosmetic surgery nor do I want to.

When I imagine myself, however, I’m always wearing a full face of makeup. My skin looks evenly colored and porcelain smooth. The positioning of my blush and highlighter draws attention to my cheekbones. My eyes look larger because I’ve pushed pigments around until I’m satisfied and pulled a mascara wand through my eyelashes. My lips are some complementary color, swiped on carefully so that the lipstick stays in the natural lines of my mouth.

That’s what I look like in my mind’s eye.

When I’m wearing this “face,” I am more confident. I tend to stand straighter. It’s easier to talk to strangers, and I don’t worry about sounding stupid when voicing my opinion in class.

Last June, my skin started to buckle under the pressure of a daily full face of makeup. It became drier and drier over time, to the point where my skin started flaking and falling off when I touched my face. To avoid further damaging my skin, I stopped wearing makeup for about two months and replaced my daily foundation and mascara with prescription acne and moisturization products recommended by my dermatologist.

I refused to let the loss of my “face” stop me, so I pretended I was still the same loud, confident woman, unbothered by her own bare skin. But I still subconsciously avoided mirrors and hid as much of my face as I could behind long hair and glasses. I grew quieter and often didn’t speak unless spoken to.

One day, toward the end of August, I did my makeup for a trip. As I dragged my lipstick over my lips and pressed them together, it suddenly hit me that I was looking at my true self for the first time in two months. I thought to myself, “Oh, there you are. It’s good to finally see you again. I’ve missed you.”

A study from Perception, a scientific journal, shows that men consider women to be more prestigious when they are wearing makeup. The same study also shows that women think other women wearing makeup are more dominant, among other traits.

Because I feel that other people perceive me as a more elevated version of myself when I’m made up, and I feel more confident when I’m wearing makeup, letting go of my foundation bottle is not the easiest task.

Upon my arrival back on campus this past fall, I believed my skin had taken enough time off, so I went back to wearing makeup every weekday. I had almost two months where my skin behaved mostly normally and tolerated my brushes and sponges. However, I had two permanent, flaky, dry patches in my skin: one by the right corner of my mouth and another under the outer corner of my right eye. Over time, the dry spots grew larger and more painful until I decided to visit the Health and Wellness Center in October.

At the Health and Wellness Center, I was diagnosed with periorbital dermatitis. Its exact causes are unknown, but it manifests as dry skin around the mouth, eyes, and nose. The nurse prescribed a four-to-six-week course of Pimecrolimus cream and told me I could wear makeup only after the duration of my prescription. I sat through the first four weeks of my instructions, counting down the days until I could look at myself in the mirror again. After the fourth week, I stopped using the Pimecrolimus cream and put my “face” on while grinning at myself in the mirror.

Two days later, my skin was drying up again in the same spots.

I went back on the cream and poured my energy into reporting and classwork, but I was more drained than usual at the end of the day. When I didn’t have those distractions readily available, I would fight down the tears I couldn’t quite keep in check. I wanted to look in the mirror and see myself, but every time I did, it would be a pallid, tired version of me hiding behind my glasses.

At the end of December, I went home and saw my dermatologist. This time, she said I could wear my makeup, as long as I used Pimecrolimus cream simultaneously, with a prescribed steroid cream to use when combatting flare-ups. My skin cleared, and after a day of makeup, it stayed that way. I thought it was a fluke, but over the course of a week, my skin stayed clear.

Now, I make sure to take care of my skin and give it at least one or two days off of makeup every week—normally on weekends. I’m wary of upsetting my skin too much again, so I’ve added two moisturizing steps to my skincare routine.

However, after grappling with this insecurity twice in six months, I am now trying to work on overcoming it. About two weeks ago, I went to class without makeup because I slept in. While I was there, I tried to be as lively as usual, and it worked. Since then, I’ve been challenging myself to go to class once in a while without makeup. Every time I decide not to put my “face” on, I’m pretty nervous for class. I have to either talk myself into it or accidentally sleep in. But every time I do it I’m proud of myself for facing my fear. And each time it’s just a little bit smaller.