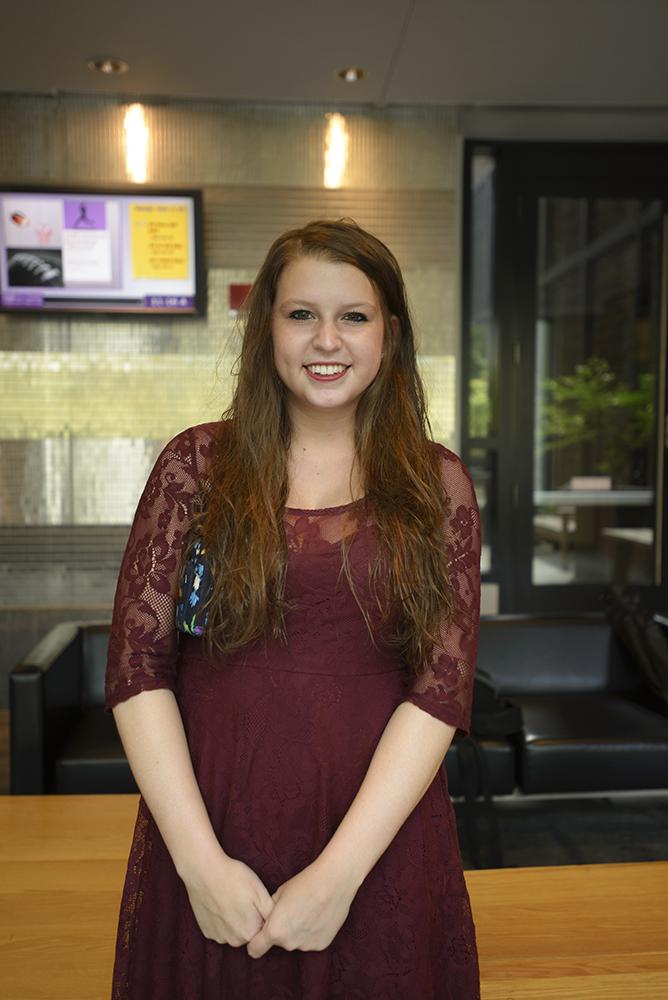 Lifelong volleyball player Sam Harton has already wielded her years of experience in her first season at Emerson.

In the New England Women’s and Men’s Athletic Conference, the freshman is currently ranked second in digs, and first in digs per set.

Sophomore outside hitter Elizabeth Reid said she has quickly become an important member of the young volleyball team.

“[Sam] has high expectations for herself and her teammates,” said the marketing and communication major, “which pushes the entire team to try their hardest.”

But Harton, a writing, literature, and publishing major who has played volleyball for almost a decade, said she’s just doing what comes naturally.

“I don’t feel like I’m doing anything super spectacular,” she said. “I just go out there and play my sport.”

Inspired by her sister, Harton said she has played 14 seasons to date.

“I started when I was in fifth grade because my sister played,” she said, “and I’ve been playing since then.”

She said her club team—an advanced squad that showcases talented youth players—placed third in nationals this summer in the under-18 category.

“[At first] I started playing for smaller clubs,” said Harton, a native of Cartersville, Georgia, a city northwest of Atlanta. “Freshman year I made one of the biggest clubs in Atlanta, and it just stuck, I guess.”

While attending Darlington High School in Rome, Georgia, Harton was also named MVP of her team in 2012 and 2013, and holds school records in single season digs, digs per game and overall digs, according to the Emerson Athletics site.

Head coach Ben Read said Harton’s experience has been invaluable for the Lions on the court.

“She’s been playing volleyball for a very, very long time. She has come in and made an immediate impact on the team,” said Read.

Harton said she always intended to play in college. As the libero—which she called the “goalie of volleyball”—Harton plays only in the back row of the court, and said her position is key.

“Defense wins championships–that’s true in all sports. If we don’t pass the ball, the hitters don’t even have a chance to hit the ball,“ said Harton. “There can be a division between front and back row players but coming together is so important… you need to find that balance in order to be successful.”

But Harton said it wasn’t easy to mesh as a team at first, since there are 12 underclassmen, but only two juniors on the team and no seniors.

“I think that’s why we had a lot of losses,” she said about the team’s early games. “[It was] really hard to get chemistry going.”

Harton said the coaches started increasing the intensity of practices, leading the Lions, which are 13-11 overall and 4-2 in the NEWMAC, to more victories, including an upset against Wheaton on Oct. 7.

“[We] beat Wheaton and we were not expected to beat them,” said Harton. “That’s a testament to how hard we’ve been working.”

Reid said Harton’s ambition is an essential element of the team’s success.

“When Sam is on the court, she wants the ball to come to her, she wants to get a great pass or dig and she wants to help her team win,” said the outside hitter. “Not every player has that drive, but Sam does.”

Read said that Harton takes criticism well and works productively with him and the coaches, and said he’s looking forward to seeing her skills develop.

“We’re just so young,” Read said. “Any improvements we continue to make as a team now will only help us at the end of the season and next year.”

As a personal goal, Harton said she wants to get up to six digs per set.

For this season, Read said a 6-4 record in the NEWMAC is an ambitious but realistic goal. Harton, however, said she has something bigger in mind:

“I want to win the conference.”

Harton and the rest of the Lions will look to get one step closer to this goal against their next NEWMAC opponent, Coast Guard, whom they play at home on Oct. 21.