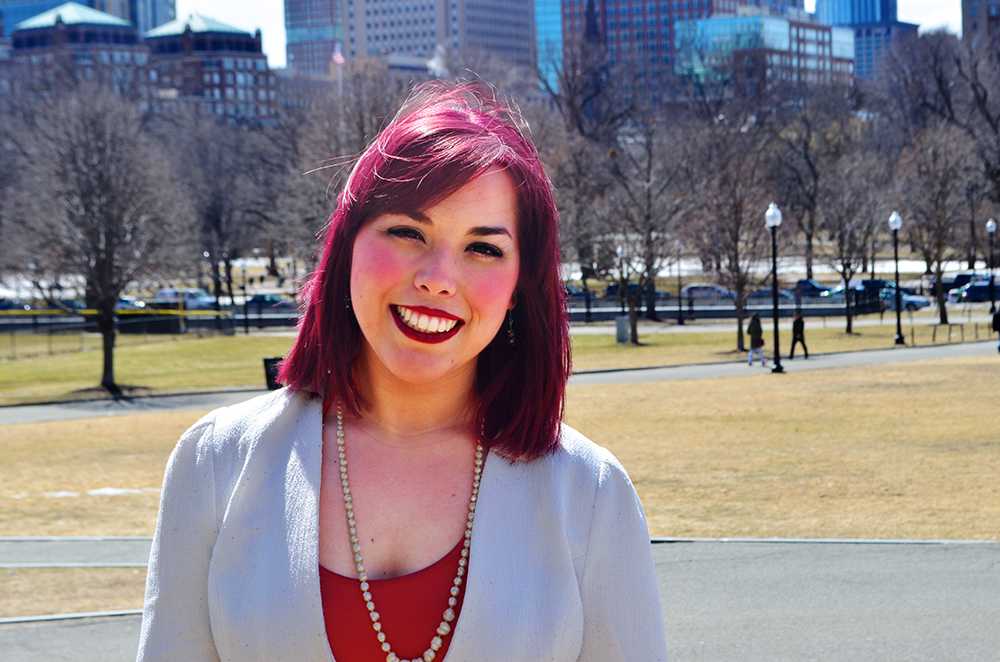 Ashlyn Lillibridge, a senior journalism major, said that her own struggles with self-esteem and experiences with bullying as an adolescent are what made her so passionate about eating disorder awareness and body image positivity.

“When I was younger, I struggled with a binge eating disorder that was never fully diagnosed,” she said. “Middle school really affected my self-esteem, and I look back now and think, ‘I shouldn’t have listened to those people because I’m not just sitting around to be looked at.‘”

Lillibridge said that since then, she has tried to use social media to promote body image positivity through inspirational quotes and other posts.

“I feel like I’m my own little personal motivator for people online and in-person,” she said.

In February, Lillibridge said she first heard about Project Heal—which stands forHelp to Eat, Accept, and Live—a national nonprofit organization that provides scholarship funding for people with eating disorders who cannot afford treatment, according to its website. Lillibridge said she jumped at the chance to get involved.

“I sent in a volunteer application right away when I saw they were looking for people to help with their creative public service campaigns,” said Lillibridge.

Lillibridge was accepted as a volunteer later that month. She had sent a proposal for an example campaign as a part of her application, and in part because of this, she was named the creative director of an existing social media campaign conceived by the co-founder of Project Heal, Liana Rosenman.

The campaign, which began in February during National Eating Disorder Awareness Week, asks people to upload photos and videos on social media that show them doing something outside of their comfort zones, using the hashtag #NotFearED. Caitlin Arcand on Twitter posted a photo of her on stage with the caption, “In honor of the #notfearED campaign, throwback to the first time I sang in front of people! Post your own first times!”

“So far, we have gotten pictures of people trying new workouts or going to a place they’ve never been,” said Lillibridge. “We haven’t received as many as we’d like, so right now, I’m working to spread awareness of the campaign through social media and word of mouth.”

Once the campaign has received more submissions, Lillibridge said she plans to make a video combining all of the submissions to be presented at the Project Heal fundraiser gala in June.

This month, Lillibridge was promoted to run the Rhode Island chapter of the organization, where she is originally from. Marissa Mayo, Lillibridge’s friend from high school and a student at Johnson and Wales University in Providence, will be leading the chapter with her. This is a volunteer position, according to Lillibridge.

Nicole Francis, who has been the head of the Rhode Island chapter since January 2014 and is moving to Florida to join the Disney College Program, said in an email to the Beacon that she will miss her work with Project Heal but is confident that Lillibridge and Mayo will work together to build the chapter even further.

“Ashlyn is peppy and full of ideas, and Marissa’s major at school involves event planning and she has many connections within the community,” wrote Francis. “I hope they find their work with Project Heal just as rewarding as I have.”

Lillibridge said sheand Mayo will be in charge of planning fundraising events, keeping track of money, posting to social media, and spreading the organization’s message in the state. They have ideas for fundraisers at various restaurants and a prom dance event where ticket sales would benefit Project Heal, according to Lillibridge.

Mayo said she’s excited to get the word out about the organization.

“I think that my goal would definitely be to spread more awareness, not just of the topic but of the organization itself,” Mayo wrote. “If this was around when iIwent through my eating disorder, I might not have gone in that direction.”

In two weeks, Lillibridge said sheand Mayo are scheduled to head to their old high school in Lincoln, Rhode Island to give a 45-minute presentation about Project Heal, their personal stories about body image, and the #NotFearED social media campaign.

“I am really excited to be going back to my old school, and that Marissa and I get to impact so many people,” said Lillibridge. “We are really hoping to eventually present at some of the middle schools, too, because eating disorders and negative body image can start as young as that.”

Lillibridge said it is important to remind students to focus on how they feel and on making themselves happy.

“We try and tell people that weight and size and calories are all just numbers,” said Lillibridge. “You don’t need to be checking those things.”

In the future, Lillibridge said Project Heal hopes to continue sending as many girls affected by eating disorders as possible to treatment facilities, and she and Mayo will be working on spreading the cause in Rhode Island.

“Since joining this organization, I’ve met so many great people,” said Lillibridge. “It’s awesome being around women who have learned to love themselves.”

With plans to one day be a news anchor or actress, Lillibridge said she plans to continue supporting eating disorder awareness organizations and hopes that fame in her career with help her bring greater public consciousness to these issues.