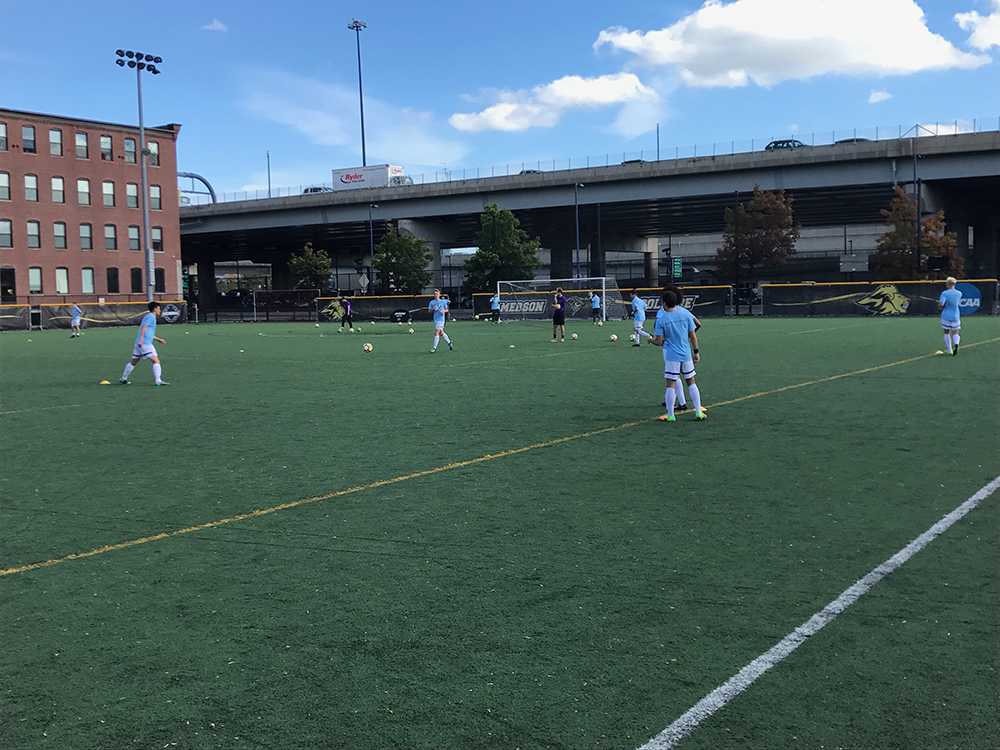 Emerson and MIT players donned blue warmups as part of their effort to raise funds for Soccer Without Borders at their game on Saturday. KYLE BRAY / BEACON STAFF

While Saturday’s clash with MIT barely affected the men’s soccer team’s NEWMAC standing, the game was far from meaningless.

On senior day Saturday, senior midfielder Franco Araujo O’Neill scored the lone goal, giving Emerson its first NEWMAC win of the season. The game was dedicated to Soccer Without Borders, and players wore blue shirts before the game to recognize the cause.

Soccer Without Borders is an international nonprofit whose goal is to use soccer to help improve the lives of young immigrants, refugees, and asylees that have fled to the United States. Rachael Cooper, the girls program associate for the organization, said that they focus on five principles: soccer, educational support, civic engagement, team building, and cultural exchange. Cooper talked about what makes Soccer Without Borders unique from other local nonprofits.

“First and foremost, we provide soccer to all of our kids, and what’s unique about our program is that we also use soccer as a tool to empower our kids and help them with their relocation to the U.S.,” Cooper said. “We help teach them English and we provide tutoring, everything that we can to help them reach their true potential and have an amazing life and feel safe and comfortable here in the U.S.”

Lions head coach Bryan Harkin said he often worked for the nonprofit when he coached at Loyola in Baltimore from 2009 to 2014. He reached out to their East Boston office when he moved to Massachusetts. Harkin has run multiple camps and training sessions for the organization in the past.

“It’s an organization close to my heart,” Harkin said.

The men’s soccer team raised $1,064 for Soccer Without Borders on crowdfunding website CrowdRise prior to Saturday’s season finale and Harkin hopes to work more with the charity in the future. Senior goalkeeper Lucas Fischer echoed Harkin’s support for the charity.

“It’s just a great opportunity to really give back to the community through a mutual passion,” Fischer said.

Fischer also stood out for the Lions in his final game with the team, making six saves and earning a shutout. Senior forward Niko Emack-Bazelais assisted Araujo’s winning goal, which was his first career goal.

The Lions came under heavy pressure from MIT after scoring, but they survived MIT’s late onslaught to earn their first NEWMAC victory of 2017. While the squad had nerves as the clock wound down, Fischer said they were motivated to pull through.

“It’s nerve-wracking to say the least,” Fischer said. “We’ve unfortunately been in that position a handful of times, but I think the difference was having that one goal [and] having something that we knew we could hang onto. It was just that motivation that we needed.”

With such a spectacle surrounding their final game, Fischer was happy that the team delivered a great performance to match the occasion.

“I think it was a matter of us rising up to the occasion and being fully focused for 90 minutes, and that’s something that we hadn’t done all season,” Fischer said. “We would let it slip at half time or a couple minutes before the end, but this was the first we were all dialed in for 90 minutes, and it pays off.”