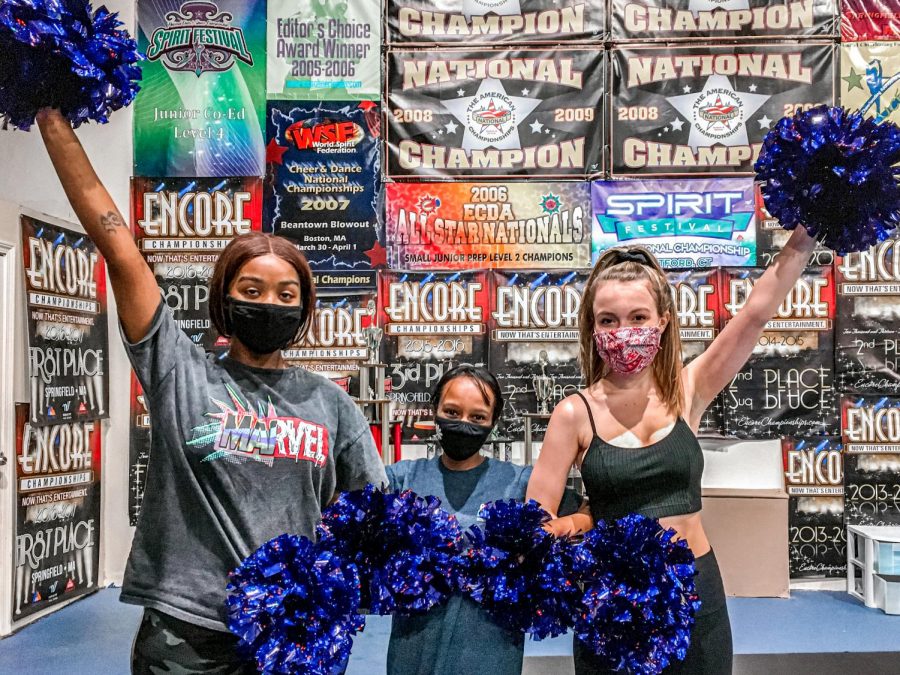 “We’re hoping we could compete in the future, which might take a while after COVID,” junior Helina Yared said in a phone interview. “We were hoping we could perform in the Boston area too, like TD Garden. We could become a club sport and hopefully get a coach… and stunt more.”

The team is still in development, with Yared designing the framework, Yared said. They are currently practicing twice a week, once on Zoom and the other in-person. Yared plans to host and lead the in-person practices at an all star cheer gym.

Yared, a former member of Emerson Cheerleading Squad, reached out to sophomore Clarissa Calderon to assist her as co-captain. Calderon is studying online this semester in California. She leads the team’s Zoom practices, which are more bonding-oriented.

“We are leading a lot of Zoom meetings just to get started because everybody’s new,” Calderon said in a phone interview. “I’m here in California, and some of the other girls aren’t in Boston, so it’s just been getting to know each other and connecting first and foremost.”

The team is planning to have a form of tryouts, but is still working on how they would be structured. It is important to evaluate each person equally and have a fair process, Yared said.

There aren’t any current requirements or prerequisites for joining the team. Lions Cheerleading are looking for those that are ready to compete and want to learn.

“Our whole thing is just doing the most that you’re capable of doing,” Yared said. “People who are willing to learn and are willing to put effort into the team really.”

First-year student Rachel Tarby, a member of the team, doesn’t have a cheerleading background. Tarby does, however, have 13 years of experience in competitive dance. She found the team through their Instagram account and decided she wanted to test the waters.

Lions Cheerleading is not currently funded by Emerson. They hope to become a club sport next semester and receive funding.

“It’s been very liberating because when you’re not a part of Emerson you can be on your own,” Calderon said. “We’re actually really excited about that because we don’t really have anyone to answer to. We’re just figuring ourselves out as a team.”

Yared created Lions Cheerleading with a focus on establishing an inclusive environment after she departed the Cheerleading Squad.

“I didn’t have that great of an experience on the other team, and I know other people didn’t as well,” Yared said. “A lot of people in my sorority had left a few years prior, and it didn’t make sense that we should have to quit something that we love doing or that we’re passionate about doing because we don’t feel like we’re being included.”

Yared has a disability known as dyspraxia, a lifelong motor disorder that affects motor skills and coordination, which she said impacts how she cheers. Her disability led to difficulties in tumbling, and Yared said she wants the new team to be a space where all are welcome.

“I didn’t really let it affect me that much, but it kind of did when I came here [to Emerson],” Yared said. “I just wanted to make sure that this new cheer team was something that people can see that people with disabilities can do sports and can do things they set their mind to.”

Yared said her inability to tumble led to her not being able to start in games.

“I think they were told by Student Engagement and Leadership they weren’t supposed to teach tumbling, but they wouldn’t let me perform for, like, the next few games,” Yared said.

The Cheerleading Squad declined to comment on Yared’s departure and said in an email that the circumstances of her departure had “already been disputed by the administration.”

The Cheerleading Squad allegedly declined on multiple occasions to provide Yared with a properly fitting uniform, according to emails sent by former SEAL Assistant Director Andy Donahue provided to The Beacon by Yared.

Emily Harrison, a former co-captain of the Cheerleading Squad, wrote in an email to Donahue that the squad was unable to provide the uniforms in a timely manner, leading to the delay in Yared getting a uniform.

“If we were to place an order within the next week, it is 4-6 weeks from there that the order will arrive,” Harrison wrote. “With only 5 weeks left in the semester, she wouldn’t be able to wear the new uniform until the spring. But, because she is also going to the castle in the spring, she wouldn’t be able to wear the uniform until the fall of 2020, if she chooses to try out again for the team… it doesn’t make sense to me to order a very expensive uniform so that it can sit in storage for 9 months.”

In the emails, Donahue accused the squad of intentionally declining to provide Yared with the proper uniform.

“You have had ample opportunities to order the correct uniform: after measurements, when the uniforms arrived, and when you appealed to SGA for additional funding for mats and uniforms,” Donahue wrote to the Cheerleading Squad. “You’ve made the decision to not include Helina’s appropriate size each time.”

“It is up to you as a co-captain to create an environment where each member feels included & they have a positive experience,” Donahue wrote. “Forcing a member to wait nearly 12 months for an appropriately-sized uniform is absurd.”

As part of the initiative to establish an accepting culture, Yared plans to have a feedback system that would allow the team to voice their concerns.

“We’re going to have a feedback form…every two weeks or so that people could put if they have any concerns, any ideas or things that they’d like changed, [or] anything they feel uncomfortable with,” Yared said.

Regardless of any issues she had with the Cheerleading Squad, Yared and Lions Cheerleading are focused on promoting school spirit and an inclusive environment.