The Berkeley Beacon • May 14, 2020 • https://berkeleybeacon.com/lions-claim-35-spots-on-newmac-spring-all-academic-team/ 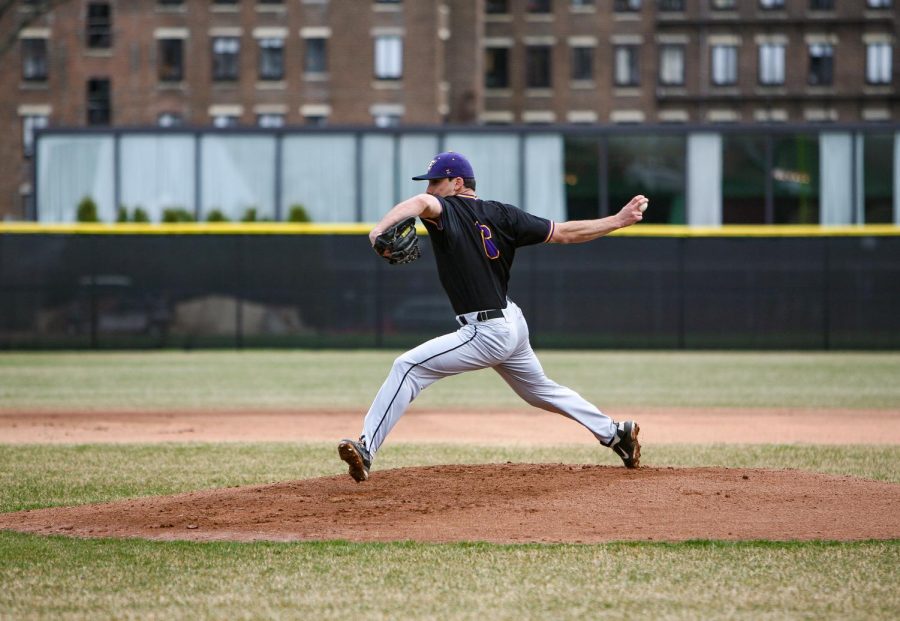 The baseball team will begin practicing this week while adhering to COVID-19 safety guidelines.

The cancellation of spring sports at the college left many student athletes devastated; however, senior pitcher Sam Knox said the announcement of the NEWMAC Spring All-Academic team brought some positivity amidst the COVID-19 global pandemic.

“It’s really great to be recognized in this fashion for work off the field,” Knox said in a phone interview with The Beacon. “It definitely brought a positive side to what’s been a tough spring semester, with the pandemic going on. Every day in quarantine seems to just lag on, but when you see something like this, it’s just cool to be recognized and to see something positive come out of what’s going on.”

The New England Women’s and Men’s Athletic Conference announced on May 1 that 35 Emerson student athletes, including Knox, were named to the Spring All-Academic team, with representation from all six spring sports. Athletes needed to achieve a minimum cumulative 3.5 grade point average in the fall 2019 semester to qualify for the award.

The baseball and women’s lacrosse teams received the most representation on the all-academic teams, with eight athletes each.

Knox said the high number of student athletes receiving the reward shows the importance of balancing athletics and academics at Emerson.

“It definitely shows what our priorities are and why we go to Emerson,” Knox said. “Managing my time took a lot of planning and a few late nights and early mornings here and there. But we knew we were going to make those kinds of sacrifices, and that’s just what comes with playing a sport at Emerson.”

Sophomore Maximo Lawlor, representing men’s tennis on the All-Academic team, said he hopes to use this award to show his teammates the importance of working hard in the classroom.

“I definitely want to lead by example moving forward, especially for the younger classes,” Lawlor said in a phone interview with The Beacon. “We do want to be fighters on the court, but it’s also really important for us to be fighters in the classroom as well. Being the only one is cool, but I also wanna see more of my teammates make [the team] next year.”

Lawlor said the 30 minute ride to and from their practice court in Danvers made it difficult to manage his school work.

“It’s so hard to fit in a lot of studying and homework into our schedule when the season is in session,” Lawlor said. “It’s tough to keep up mentally with the academics with all of this tedious traveling. I’m notoriously known by both my coaches and my teammates for doing homework on the bus rides to practice. I have a very busy schedule since I also participate in other extracurriculars, so to help balance everything out, I take advantage of that 30-minute bus trip.”

Five athletes on the women’s tennis team made the all-academic team. Senior Mackenzie Swaney said the length of the team’s matches adds to her and her teammates’ difficulties with balancing athletics and academics.

“Everything we do is far away from campus, so that takes a lot of time out of our schedules,” Swaney said in a phone interview with The Beacon. “When we have matches, they take up the whole day, and we have around two or three matches a week. Sometimes it surprises me that I can handle both my athletics and academics, and I’m proud of my whole team for doing that as well.”

Swaney will not return to the women’s tennis team next season, as she plans to study at the Los Angeles campus and graduate following the fall 2020 semester. Swaney said earning a spot on the all-academic team reminds her of the success she achieved as both an athlete and a student.

“Although the season was cut short and I won’t be playing for the team going forward, it all hits less harshly now because I feel like I’ve really been recognized for the work that I’ve done over the last three years,” Swaney said. “Making the All-Academic team proves to me that I worked hard, and I put in the work both academically and on the court.”

Six athletes on the men’s lacrosse team made the all-academic team. Sophomore defenseman Jack Lewis said the team’s academic success shows their resilience as they grieved the loss of their teammate, Daniel Hollis.

“This is a group of guys that are hard workers on and off the field, and this really proves itself when six guys, almost a third of the team, are awarded this for the 2020 season,” Lewis said in a phone interview with The Beacon. “I think with this specific group of guys and what happened to [Hollis], to still earn a 3.5 [GPA] with the loss of a teammate shows commitment to the classroom and their ability to process so many emotions and to keep moving forward.”

“I know for a lot of spring sports, we’re all playing throughout the week and we’re spending so many hours on the court or on the field,” Lawlor said. “It’s just really impressive to see that student athletes can balance the work. It just goes to show that we’re so much more than athletes and that we’re really well-rounded as an athletic department.”