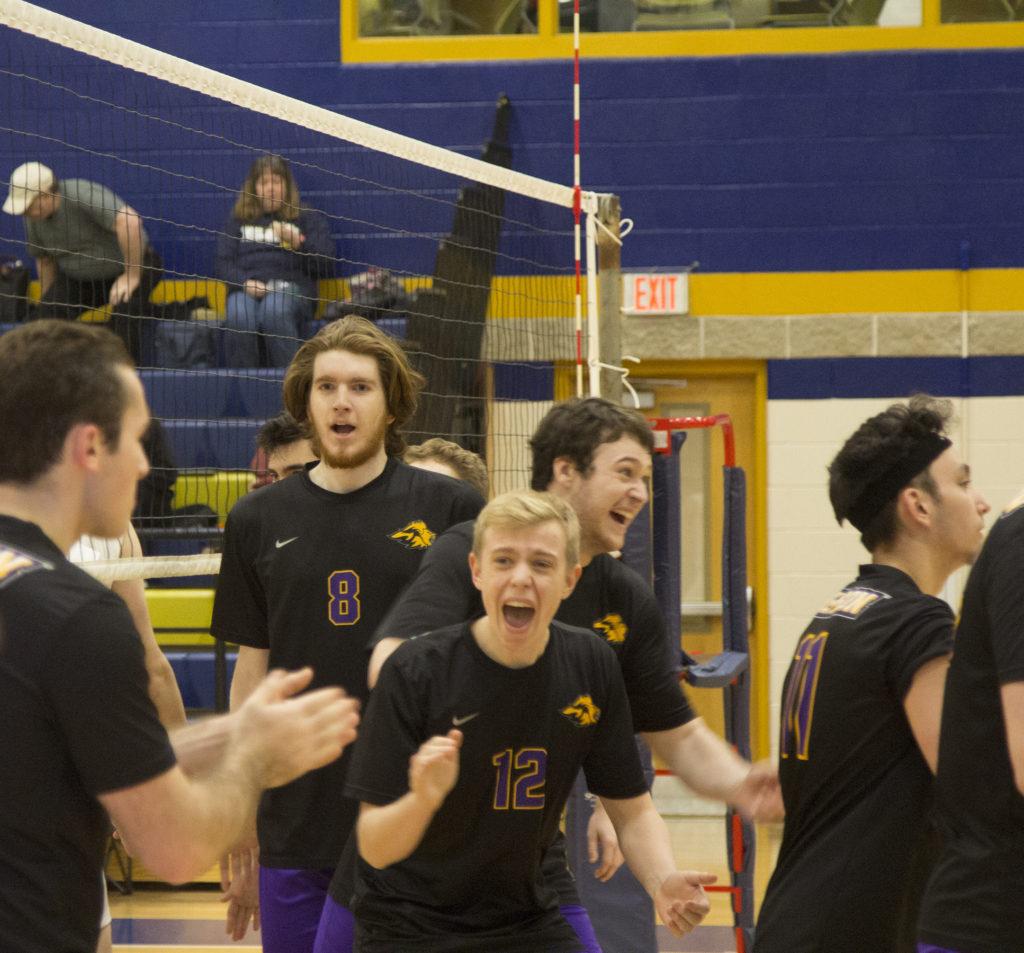 Joris Pijpers (center, No.12) pumps up the team prior to the game. Photo: Kyle Bray/Beacon Staff

Both teams traded points until Johnson & Wales went on a 15-8 run to take an early 18-11 lead in the first set. The Wildcats went on to take the set 25-15. Head coach Ben Read said that the team started slow, which put them in an early hole.

“We could have taken advantage of a couple easy points to begin with,” Read said. “It was a slower start than we wanted, but we did build from there. We competed a little bit better, but so did Johnson & Wales.”

“We needed to be a little smarter to go ahead and combat that, but I think today their height and athleticism was a little too much to handle,” Read said. “They were really big at the net.”

The Lions got off to a tough start in the second set, but after Read called a timeout, the team rallied to go on a 6-4 run to make it 14-12. Although the players continued to gain momentum, Johnson & Wales won the set 25-18.

Emerson came out strong in the third set, taking a 5-3 lead off a kill from junior Win Kittivatcharapong. The advantage did not last long, however, as the Wildcats battled back with a 10-2 run to close out the match. Johnson & Wales sophomore middle Josh Pitzer capped Emerson’s season with a match-winning kill.

Read said he saw improvements from his squad in the final set.

“I think we were a little more consistent, we capitalized on a few of their mistakes,” Read said. “And then all of a sudden, like I said, Johnson & Wales were pretty hot and they stepped up and they rebounded.”

Sophomore libero Carl D’Aguiar said the little mistakes that team made throughout the game caused them to fall behind early.

“We weren’t siding out, and we were messing up on serve receive, and we were giving away little losses,” D’Aguiar said. “[Losing] two or three points at a time against this kind of team, that’s a loss. Those small mistakes will lead to our team losing, and we needed to do better on that.”

Read said in the end, his team’s slow start cost them the match.

“We’ve played them enough times, and we can sneak in a few sets to make it a little bit closer, and I think they didn’t want us to go ahead and do that this year,” Read said. “They were a little bit more prepared, and they fought just as hard as we did. We stepped it up, and they stepped it up even higher.”