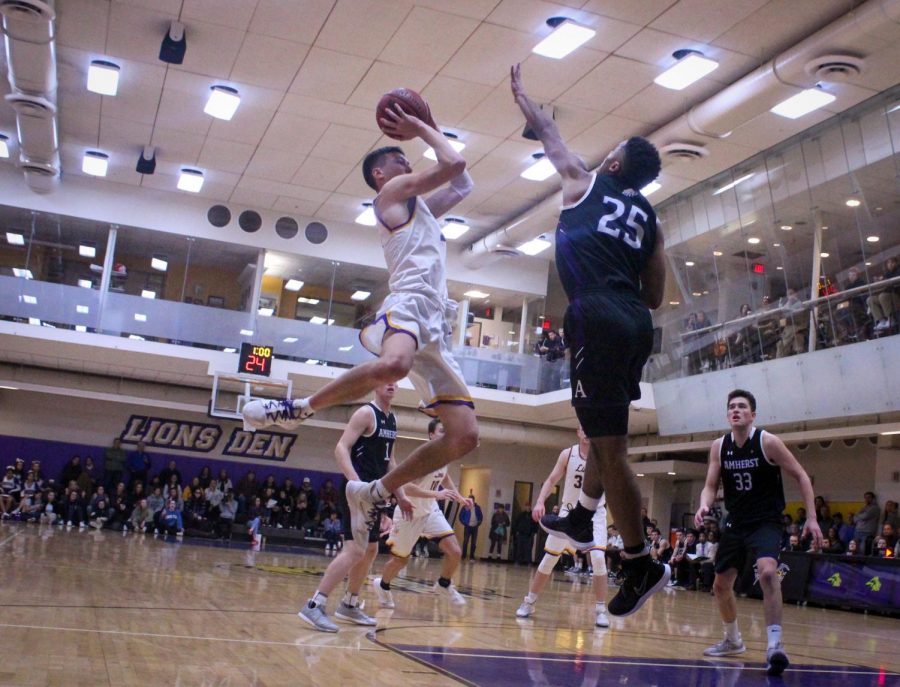 Nationally ranked Amherst College snapped the men’s basketball team’s three-game winning streak after defeating the Lions by a score of 97-86.

Amherst came into the game ranked 14th in Division III and lost to Babson College on Wednesday, Dec. 4. The Lions held as much as a seven-point lead in the first half and shot 60 percent from the three-point line.

“I think we were just getting to our spots,” sophomore guard Zach Waterhouse said in a post-game interview. “In the second half they sped us up, but in the first half we were kind of controlling the pace, and they were missing more shots.”

“We need to get the ball to Jarred because he’s big and he’s talented,” Curley said in a post-game interview. “He can not only score, but he can pass and get people in there. He’s got to really get a better position and get down there, but he’s improving, he’s attacking, and he’s got to continue to improve.”

The Lions ended the first half with a 40-39 advantage—the last time the Lions held the lead. Amherst played a physical second half, which Waterhouse said played to the Bears’ advantage.

“That kind of played into their hands, because we don’t usually play like that as much,” Waterhouse said. “We can play tough and physical, but we like to run and get shots. I think the game just got tougher, and that’s what they kind of wanted.”

Amherst led by as much as 16, but Waterhouse and Martin kept the game competitive by scoring a combined 26 points in the half. Curley said he is optimistic about the team moving forward.

“I really like our team,” Curley said. “We’re just not quite at the level we want to be yet, but I think if our guys keep working, we’re going to get better, and we’re going to iron out some of our flaws.”

Curley said playing a nationally ranked team will help prepare the Lions as they approach their conference schedule.

“We are a work in progress, and there is nothing to hang our heads about because we are loaded with some talent,” Curley said. “We just have to get better, and I think we’re getting there.”

The Lions play their next game at home on Tuesday, Dec. 10 against Lesley University at 8 p.m.