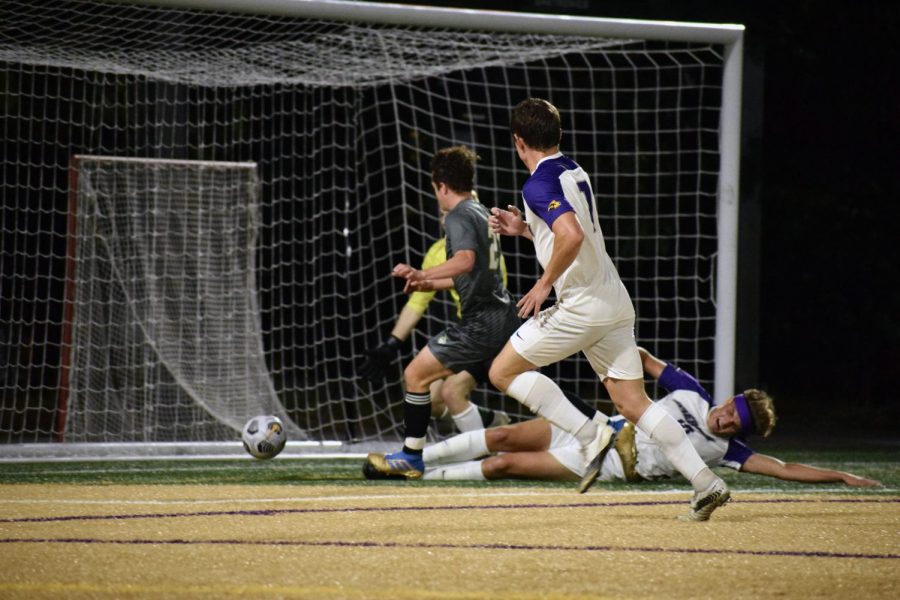 Emerson soccer players during the game against the Lesley Lynx.

The men’s soccer team won the annual battle for the Charles River Cup on Tuesday, defeating Lesley University four goals to none at Rotch Field—the seventh time the team has won the trophy.

Entering Tuesday’s game, the Lions were looking to rebound from a tough loss to Springfield in their first New England Women’s and Men’s Athletic Conference game this weekend. Head coach, Daniel Toulson, said the final score was not a reflection of that game and his team wanted to show a better level of play in the hotly anticipated matchup against Lesley.

“That was the focus, not being too down on ourselves and just again focusing on the process,” Toulson said in a postgame interview. “We spoke a lot about having high standards and setting our standards regardless of the opposition we’re playing.”

Lesley University had lost their last six matches entering the contest and the Lions wanted to continue carrying a positive atmosphere into the Charles River Cup.

“We just wanted to go out there, play as hard as we could, and just forget last week,” co-captain defender Darius Boamah said after the game.

The Lions set the tempo following kickoff when they were able to get a shot on goal within the first few minutes of the game. The shot, a header off of first-year midfielder, Gregory Kopanezos just missed over the goal.

The high pressing would continue in the first half as the Lions outshot the Lynx 11 shots to two. The Lesley goalkeeper kept the game at a draw, until the Lynx gave up a penalty kick to the Lions in the 18th minute. Junior forward, Phil Han, took to the penalty box and found the back of the left side of the net, giving the Lions the lead.

“I just was trying to slot it to one of the corners and make sure we go up one-zero,” Han said in a post-game interview.

The Lions would remain one goal up on the opposition going into halftime despite commanding possession and creating chances. Their small lead only grew after the whistle blew to start the second half.

In the game’s 47th minute, Han fired a shot on goal that deflected off of Lesley’s goalkeeper. When the ball landed back at his feet, Han didn’t miss, sinking his second goal of the day.

“I shot it from far,” he said. “I wanted to make sure I followed through with my shot just in case it popped back out to me.”

Just when the Lions gained a two-goal advantage, they wasted no time adding another goal to the score. In the 48th minute, first-year forward, Theodore Bushara, tapped in the first goal of his collegiate career assisted by senior defender, Ryan Anderson.

The Lions now led the Lynx by three goals to none with the majority of the second half to play. Toulson said the quick scoring burst can be attributed to a change of tactics in the attacking third of the field.

“The conversation at halftime was that we need to move from side to side and find moments to break lines and that’s how our goals resulted,” Toulson said.

In his first game wearing the captain’s armband this season, Boamah, scored a header off a corner taken by first-year midfielder, Ivan Bruce, in the 69th minute putting the Lions up by four.

“I thought it was pretty good,” Boamah said of his performance. “Some things obviously I could clean up but I thought overall it was a good performance. I’m glad that I got to score with the armband on too.”

The final whistle blew and it was finally time for the team to lift the Charles River Cup. The team brought the trophy to the center circle, faced the fans in attendance, and lifted the trophy twice.

The Lions prepared for the cup just like any other game despite the fact that more was on the line than a normal matchup.

“It’s got nothing to do with the external factors like there’s a cup on the sideline,” Toulson said. “We still want our process to be the same, we still want to bring good energy, and want guys to be good teammates.”

The Lions will look to build on their dominant performance as they head into their weekend matchup at home against NEWMAC competitor Babson College at 1 pm.

“It’s a good feeling,” Toulson said. “A lot of guys got to play, some guys who needed a rest got a rest so that’s positive. Then we’ll come back tomorrow and we’ll start looking at Babson and figure out ways that we can be super competitive.”