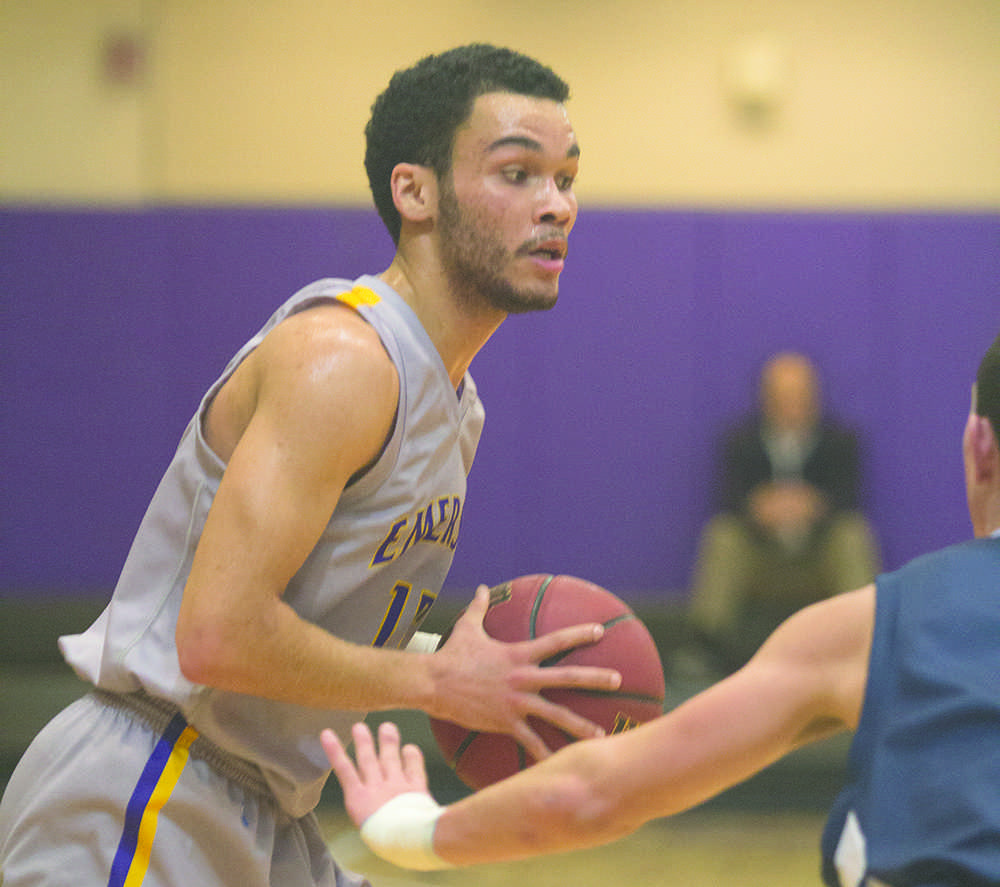 Emerson’s transition into the New England Women’s and Men’s Athletic Conference brought with it fresh challenges that were too much to overcome for the other five team sports that have already made the transition. But a scrappy men’s basketball team led by coach Jim O’Brien has overcome the odds this winter, following a December upset of then-No. 1 Amherst College with another monumental week to begin February.

The Lions toppled another nationally ranked Division 3 team Feb. 6, getting the best of NEWMAC leader Worcester Polytechnic Institute, 71-67, as Emerson took the lead under seven minutes in and improbably held off the Engineers over the final 33:15. The win snapped a 15-game winning streak for WPI, and a 27-game streak in its home gym.

“The key was to keep the pedal down, play aggressively, and play our game,” said sophomore guard Tyson Hallowell, who had a team-high 19 points off the bench versus WPI. “When we play our style of game we can beat any team in the nation as we’ve seen.”

A week that started with a Thursday night upset win culminated with a dismantling of Worcester’s other NEWMAC school, as the Lions blew out Clark, 89-59, on Saturday afternoon at Bobbi Brown & Steven Plofker Gym, all but ensuring Emerson the fifth and final spot in the NEWMAC Tournament.

With a Wednesday night win against Cost Guard, paired with a Clark loss, the men’s basketball team became the first varsity sport at Emerson to make the NEWMAC playoffs.

“We have to keep our foot on the gas,” said junior captain Eli Kell-Abrams, who connected for three 3-pointers and had 12 points against Clark. “We have no intention of letting up.”

To cap off the banner stretch for Emerson, sophomore Michael Thorpe was named NEWMAC Player of the Week, another first for Emerson Athletics in its new conference.

“It’s a great honor, but I honestly didn’t expect to win the award,” Thorpe said on Tuesday. “I actually thought Jon Goldberg should have won the award because I thought he played better than me in those two games, but I am nonetheless honored by it.”

The 6-foot guard from nearby Newton (Thorpe attended Newton North) is quickly becoming a NEWMAC force to be reckoned with. He tallied 17 points and had 10 rebounds versus WPI. Thorpe scored nine of those points in the final 12:40.

Against Clark, he racked up 25 points, 11 more than any other player, shooting 8-of-10 on field goals and 8-of-10 on free throws. His only missed shots were on 3-point tries.

“We’ve got our edge back and now we’re competing with the top teams in the conference,” Thorpe said. “We went to overtime with Babson, we almost knocked off [Massachusetts Institute of Technology] at MIT, and then finally we got that staple win and beat WPI at WPI.”

As Thorpe alluded to, the senior captain, Goldberg, also came through under the bright lights, piling up 16 points and 15 rebounds on efficient shooting against WPI, including two free throws with three seconds remaining for a four-point Emerson lead.

Earlier in the WPI game, Goldberg keyed the rally that put the Lions in front for good.

The 6-foot-4 Vermont native took a long rebound the length of the court for a 3-point play 6:45 into the contest, making it 12-11 on the free throw. On the next play, Goldberg had a steal and got it out to Kell-Abrams for an assist. On the WPI possession after that, Goldberg again took a rebound all the way for a 3-point play. Finally, Goldberg drew a foul and made both free throws on Emerson’s next offensive possession, almost single-handedly turning an 11-9 deficit into a 19-11 lead over the course of just 1:14.

Emerson would end up going on a 21-1 rally across a stretch of just over five minutes in the middle of the first half. A 3-pointer and a jumper in succession from Hallowell capped the run, making it 30-12 in favor of the Lions 13 minutes into a chippy contest.

Goldberg left the game with a bloody nose and the Engineers responded by closing the half on a 18-4 run to pull within 34-30 at the halftime intermission. Although WPI had the game within five points for most of the second half, Emerson led the entire way.

The loss was WPI’s first in the NEWMAC all season, going 8-0 before then.

“We knew they were really good, but we played with them last time and we knew that they were ready to go down so if we played well we could beat them,” said sophomore forward Jacob Forchheimer, who along with Kyle Edwards combined for four straight free throws midway into the second half to stymie a WPI rally. “They play really tight ball pressure, so we knew if we spread them out we could go by them and that worked out.”

Against Clark, Emerson controlled the tempo from the start. The Lions led by 18 at the half, before cruising to a 30-point win.

“It really feels good and it validates all that hard work we put in together as a team and as a unit,” Hallowell said Saturday afternoon as the Lions all but clinched the playoffs.

Again, Emerson led nearly the entire way as Kell-Abrams put the hosts ahead 1:38 in.

Clark scored eight straight points midway through the first half to pull the score to 20-15 Emerson, but the Lions responded with 13 points of their own. Thorpe had seven points during that back-breaking rally, including two free throws to make it 33-15 with 5:11 to go in the first half. Emerson never led by less than 14 the rest of the way.

Hallowell and Forchheimer each chipped in eight points off the bench, but it was the player who coach O’Brien called “a reluctant star” back in the preseason who turned in the do-it-all performance of the game. Goldberg’s under the radar stat line: 12 points, again, on good shooting, and then 14 rebounds, five assists, two steals, and a block.

Emerson shot 58 percent from the field, while holding Clark to just 29.3 percent. Following an up and down start to the NEWMAC season, the Lions won back-to-back conference games in the midst of their best stretch of the season.

“We’ve been playing good basketball for the past five games,” Kell-Abrams said. “We started really playing well against MIT and we just kept rolling. We haven’t won some of the tighter games, but we’ve been in every single one of them.”