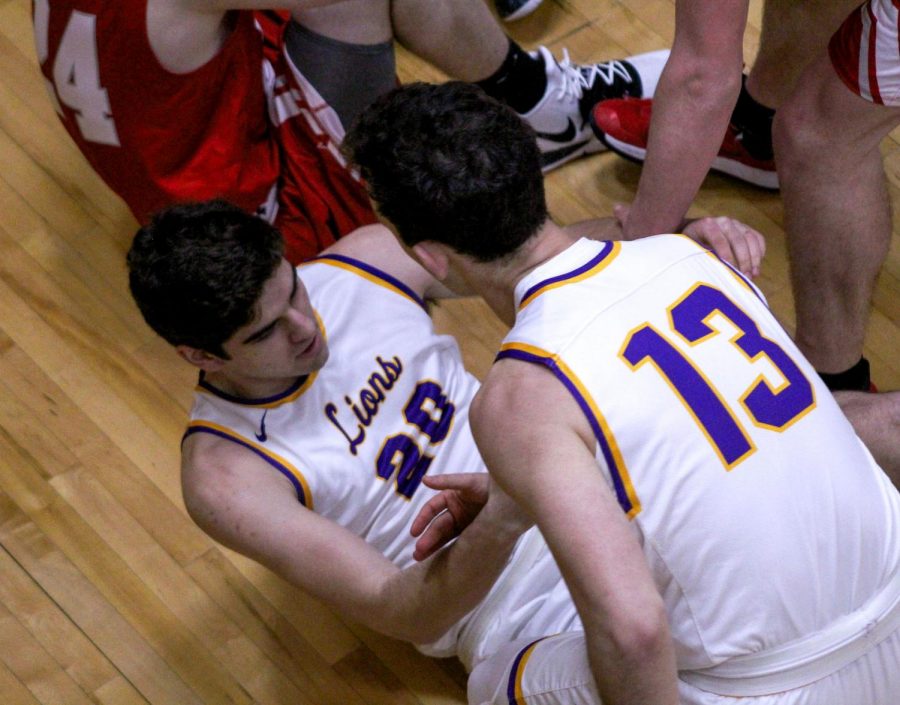 Junior guard jack Healy helps up teammate Ben Allen during a game against WPI on jan. 22, 2020.

The men’s basketball team fell to Worcester Polytechnic Institute by a score of 87-64 in a rematch of last season’s NEWMAC championship on Wednesday, snapping the Lions two-game win streak.

The Lions last faced the Engineers in the 2019 NEWMAC championship game, where the Lions defeated the Engineers 93-75.This loss drops the Lions to the number four spot in the conference and breaks a three-way tie for first place.

The Lions opened the scoring in the first half and led for just over two minutes until the Engineers tied the game at four points. The Lions never regained the lead. The Lions also struggled with transition defense, and WPI scored 18 points off of 14 turnovers.

WPI maintained their lead with a season-high 21 points from senior forward Jake Wisniewski and 18 points from junior guard Colin McNamara.

Both teams played physical, which resulted in 42 personal fouls between them. WPI junior forward Ethan Harrell fouled out with just under two minutes left in the game.

“The way they play, they’re really aggressive, they’re strong, they lean on you all game, and we had to match their physicality and not look for bailouts, and I think we didn’t,” head coach Bill Curley said in a post-game interview. “They got up in our face, and we just kind of shied away. We let them push us all over the court.”

The Lions will seek revenge against the Engineers on Feb. 15 at WPI. Curley said the Lions need to remain as tough as possible as they enter a challenging phase of the season.

“We are getting into that point of the season,” Curley said. “We have just got to fight through these dog days and show up and embrace the opportunity that we get to play basketball every day, and that’s our sunshine.”

The Lions play Wheaton College at home on Jan. 25 in another NEWMAC conference matchup.