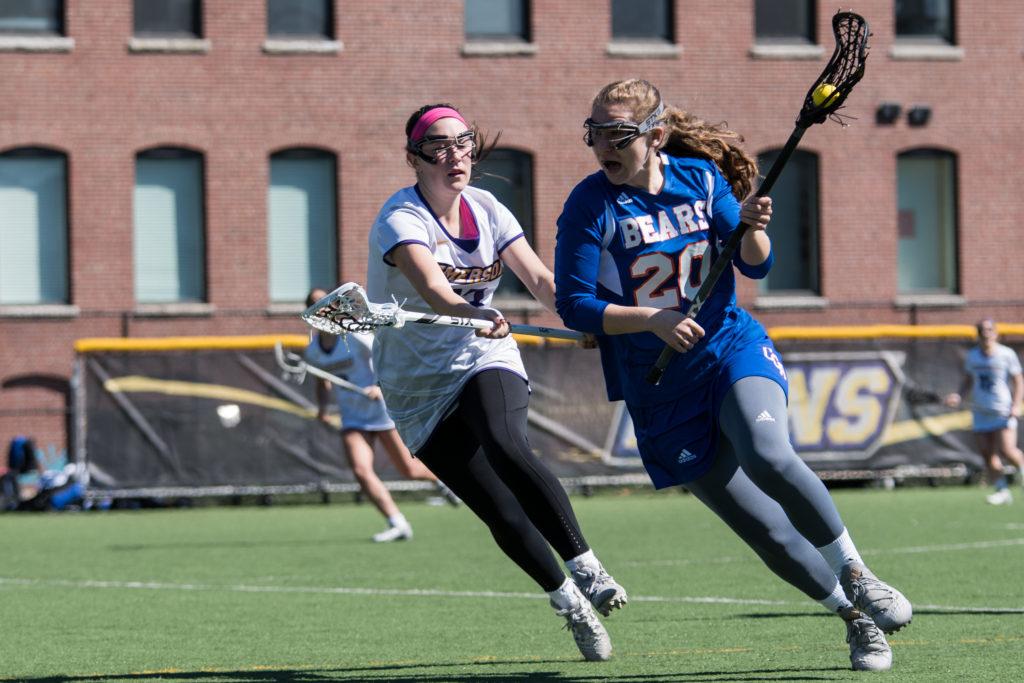 The Emerson women’s lacrosse team had a tough start to their season after losing six nonconference games. Midway through conference play, the team is still hunting for their first win of the season.

With four games to go in New England Women’s and Men’s Athletic Conference play, the Lions hold a 0-4 record and are last in the conference, three spots from the final playoff spot. Head coach Kathryn Egizi said that building confidence in their young players will help the team close out the season on a high note.

“We have a lot of new faces on the field this year, a lot of young freshmen who are coming in and looking to fill some big roles,” Egizi said. “We’re just looking to get better every single game and help build their confidence, figure out where they fit best, and stay competitive in these games.”

The Lions entered this season with several setbacks to their squad, which made the NEWMAC playoffs as a No. 4 seed last year. The team lost key midfielder Meredith Weber ‘17, who graduated following the end of the 2016-17 campaign. Weber won the 2017 Emerson Athletics Female Athlete of the Year award and scored a career high 63 goals in her final season. Junior midfielder Paige Haley suffered a season-ending ACL injury while playing for Emerson’s women’s soccer team in the fall, an injury that Egizi said affected the women’s lacrosse team.

“She will not be able to play for the rest of the season which was a killer for us,” Egizi said. “She was an all conference player for us last year [and] is a really important defender on our team. That’s a big hole that we have been struggling to try to fill because of that injury.”

Aside from losing Weber and the injury to Haley, the team also lost 11 players from last year’s squad, with only two seniors graduating. This year’s team has four less total players than the previous year’s squad and features six freshmen. Egizi said the freshmen have stepped up and fill important roles despite their youth.

“I think it is just slowly but surely figuring out our systems and figuring out how to play with confidence on the field,” Egizi said. “A lot of times freshman have a year or two to watch and learn in practice, but we’re expecting a lot out of them. They’re learning by doing and through our games.”

Egizi said she was impressed with freshman midfielders Kelli Mark and Lily Nelson.

“Kelli [Mark] is really starting to step up and handle the ball well and look to go to goal,” Egizi said. “Lily Nelson is someone else who has really stepped up and [is] playing a midfield role, a leader on defense, and starting to get some looks offensively.”

The Lions will face off against Massachusetts Institute of Technology, Babson College, Wellesley College, and Springfield College in their final four games of the season as they look to avoid their first defeated season since joining the NEWMAC. Egizi said every game is important as they close out the season.

“In NEWMAC play every game is important, and we just want to show up and play our best and hope that’s enough,” Egizi said. “That’s really our focus moving forward.”

The Lions next face off against MIT at Rotch Field on Wednesday at 7:30 p.m.