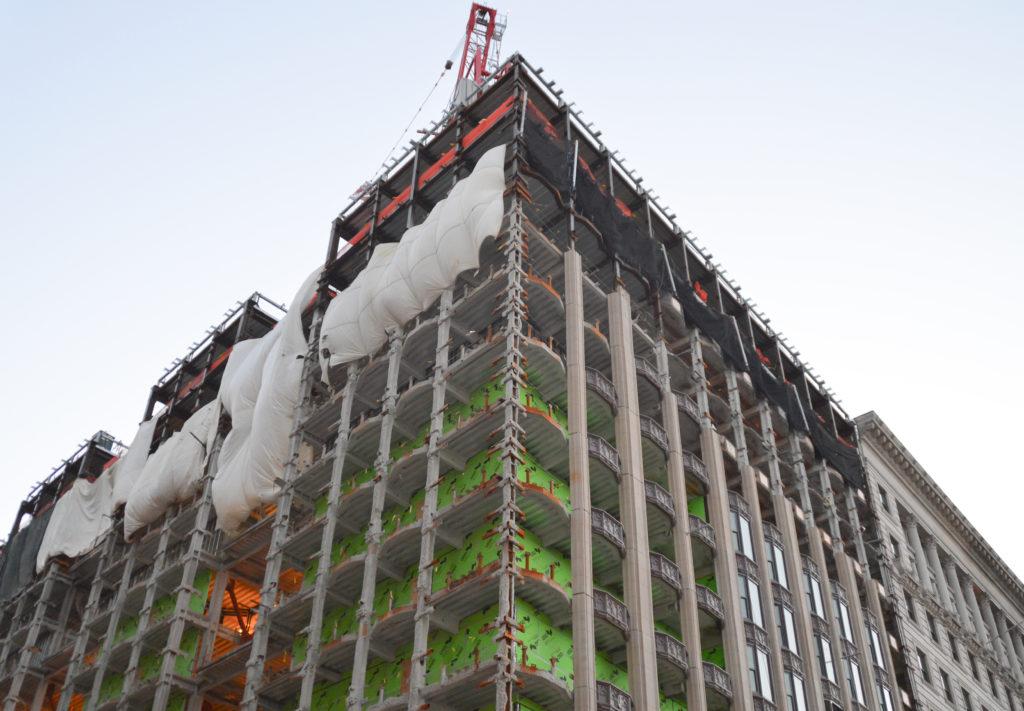 The expected reopening of the Little Building in August 2019 is still on track, according to Vice President and Dean for Campus Life James Hoppe.

The residence director of the Colonial residence hall continues to receive noise complaints from residents who share a wall with the Little Building construction project.

Suffolk Construction Company workers operate on the Little Building after–hours to meet the college’s projected opening for the residence hall in August 2019, according to Colonial RD Michael Barcelo.

The hours of construction set by the company fall between 7 a.m. and 11 p.m., according to Barcelo.

According to the city’s website, Boston does not permit any noise louder than 50 decibels between 11 p.m. and 7 a.m.

Sophomore Elizabeth Zarb’s room shares a wall with Little Building construction outside of her window, and she said she hears the construction noise earlier than 7 a.m. and later than 11 p.m.

“There will be times when I’ve woken up at night and I’ll have a group chat with my friends at two or three in the morning, and they’re like, ‘Do you guys hear that?’ And it’s construction still happening,” Zarb said.

Barcelo said Suffolk Construction sends weekly updates on matters like extended hours, but he said this doesn’t mean they always comply with their notices.

“There is confusion and misinformation,” Barcelo said.

Colonial residents complained to him of excess noise for the past year, and Barcelo said he understands their frustration.

“It’s been a challenge. As an RD, I really struggle with this,” Barcelo said.

Students reported the noise last year. The college held an open meeting in February for students and administrators to discuss solutions for extended hours of construction.

Since Colonial features more single rooms than any other residential building on campus, according to Barcelo, many Colonial residents pay more for their room than students living in other residence halls. On-campus students pay $8,845 for a double room or $9,095 for a single.

Zarb said she pays extra for a single in Colonial. Barcelo said he can’t do much about the disruptions, but he encourages students to come up with creative solutions to the noise.

“I encourage students to adjust their schedules within reason and use earplugs, but students say if they wear earplugs, then they can’t hear their alarms,” Barcelo said. “As creative people, we should be able to brainstorm different ways to fix this.”

The college started construction on the building in summer 2017 as part of its new housing mission to extend on-campus housing for a third year. This change occurred when Mayor Martin J. Walsh required colleges and universities in Boston to limit the amount of students who live off-campus.

Paige Ervin, a sophomore in the Colonial residence hall whose room does not neighbor the noise, said she doesn’t blame Suffolk Construction.

“I don’t think it’s the construction workers—I think it’s Emerson telling them they have to have something done by a certain time and then not having enough time to finish it unless they work overtime,” Ervin said.

Arthur Mombourquette, senior associate vice president for real estate, or Michael Faia, director of construction management, could not be reached for comment before the time of publication.

Barcelo said he remains hopeful the noise will lessen in the coming months although Colonial residents remain frustrated with the constant cacophony from Little Building.

“Hopefully the LB facade will be up by the end of December,” Barcelo said.

This will lower the noise levels as construction moves inward to the internal parts of the Little Building. However, according to Barcelo, the noise will not completely diminish.

Barcelo encourages students to openly communicate with their resident assistants and RDs if the construction noise becomes detrimental to academic success.