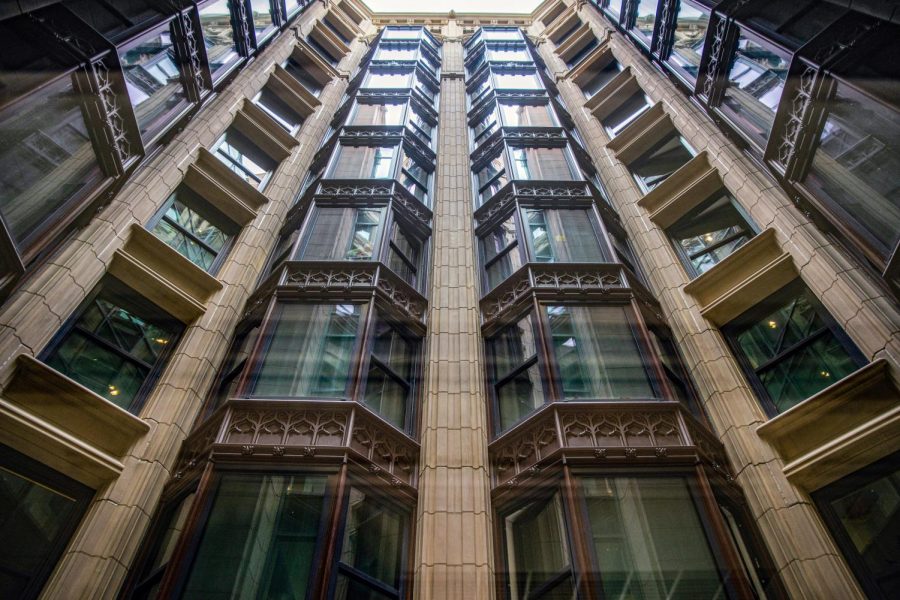 Skywell of the Little Building.

Little Building residents who live in a lightwell-facing room say their sleep, class, and work schedules are being disrupted by the recurrence of intrusive voices and loud music echoing off the building’s walls until the early hours of the morning.

Lightwells—unroofed air shafts within large buildings—allow light and fresh air to enter the 198 inward-facing dorm rooms housing first-year students. Since the fall semester, some students who reside in the lightwell rooms have filed noise complaints due to loud noises that occur past the residence hall’s set “quiet hours” of 11 p.m. to 9 a.m. Sunday through Thursday and from 1 a.m. to 10 a.m. on Fridays and Saturdays.

Nick Powell, a first-year visual and media arts major, lives on the building’s eighth floor—in the lightwell facing the green-colored common room. He said every time he opens his window, he is in for a clamorous surprise.

“I wake up every day and I don’t know if I’m gonna hear Gwen Stefani or Wonderwall or just people screaming,” Powell said. “I’m not usually trying to sleep because I don’t go to bed until like 4 a.m., but still, it’s not nice.”

He said closing the window minimizes the noise, but the varying temperatures of his dorm room make it hard to keep them shut.

“When the thermostat doesn’t really work, you open the window and you let some cool air in, but then you’re also letting in ‘No Scrubs’ by TLC,” Powell said. “It’s kind of a trade-off.”

Roommates Nathalie Calvillo, a first-year visual and media arts major, and Sara Fergang, a first-year writing, literature and publishing major, filed a noise complaint when the lightwell sounds became too much to bear. They also live in the green-colored lightwell, but on the 10th floor.

“Last semester, we called a noise complaint,” Calvillo said. “It was like one in the morning on a school night. I know it’s hard to pinpoint it within the lightwell, so I get that it’s hard to control, but I don’t expect much–just a little bit of peace. An RA finding the source of it and being like, ‘Hey, people are complaining,’ is really all I ask for.”

On Feb. 8, Little Building Resident Director Britt Locklin sent an email to all of the lightwell-facing residents.

“It has come to our attention that there have been multiple community disruptions coming from the rooms that face into the lightwells,” she wrote. “This has included music, screaming, and other loud and inappropriate occurrences.”

Locklin outlined the repercussions students may face if they are caught deliberately making loud noises in the lightwell.

“If this behavior continues, formal action through the Community Standards and Student Conduct process may occur to people in violation,” the email read. “We ask that residents of the lightwell rooms report noise disturbances to the RAs on duty for your respective area immediately so that we can address concerns at the moment it happens.”

Caitlin Farrell, a first-year visual and media arts major whose room is on the 12th floor of the yellow-colored lightwell said deliberately making loud noises, especially in the middle of the night, is disrespectful to the students who have class or work early in the morning.

“You don’t know what people are doing and what they’re trying to work on,” Farrell said. “What if they’re in class on Zoom and they can’t focus because you’re playing music? Or what if it’s really late and somebody has an 8 a.m. or work the next day that they need to get up and be responsible for?”

Katie Broderick, a theater and performance major who lives in the blue-colored lightwell on the 10th floor, said she understands the appeal of connecting with other students through means of the lightwell, but draws the line when it becomes disruptive.

“The first few weeks I was here, I thought it was kind of fun,” Broderick said. “People were in isolation for a week so no one was able to communicate any other way. That’s fine. We didn’t really have much going on but now, since it’s constant and during school nights, it’s annoying and inconsiderate.”

Besides back-and-forth discourse, bizarre noises are among the sounds Broderick said she’s heard from the lightwell.

“One time I heard someone doing Elmo impressions at like one in the morning, just really loudly,” she said. “And I’ve heard people yelling ‘shut up’ when others have been being loud.”

Fergang said she hopes the “quiet hours” signs in the Little Building will resonate with students.

“Courtesy hours are 24/7,” she said. “I don’t care if I hear noise, but if it’s yelling and loud enough so anyone in the lightwell can hear it, that’s when it becomes a problem—even when it’s just 3 p.m. on a school day.”

Powell said he understands the woes of being in college during a pandemic, but believes lightwell residents should quiet down for the sake of their peers.

“If you’re reading this right now, I know it’s hard out there,” he said. “I know that it’s hard to sleep and you want to play music but just wait until, like, 8 a.m., if you don’t mind.”