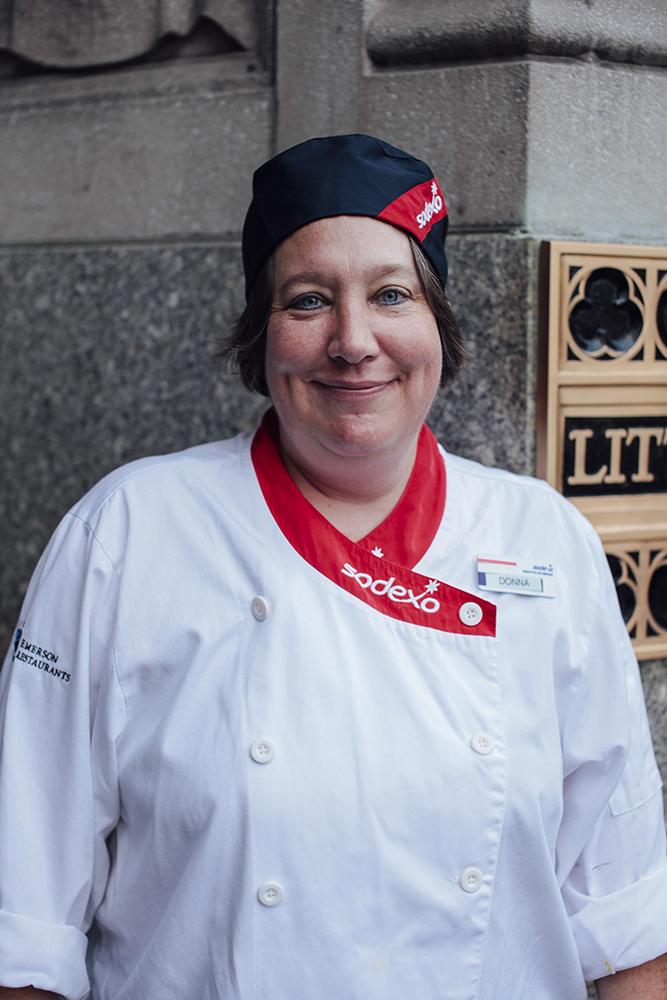 Little Donna, Emerson’s pastry chef, said she spends her days off researching new recipes. She then puts her own little twist on them, brainstorming ways to make her creations even more delicious.

The recipes are tried and tested until they are ready for students’ tasting, appearing in mass quantities on the dessert bar in the Little Building dining hall. From creamy, orange pumpkin spice pudding cups to purple-frosted blueberry-lemon cupcakes, Little Donna said she tries to make desserts a colorful and flavorful treat for Emerson residents.

Donna Papastavrou, or “Little Donna,” as she is known on campus, is the mastermind behind all the cupcakes, fudge brownies, and vegan cookies students enjoy in the dining hall. She said she has worked with food for 38 years. She managed an Irish pub in Boston and owned a catering business before she was hired as a baker by Aramark, Emerson’s former food provider, in 2009. She stayed on after Emerson switched to Sodexo last year. She said she was recruited by her former boss at the pub she managed, Steve Canario, who now is the general manager of Emerson’s Sodexo dining team.

“When I was little, I watched my grandmother cook, so I was naturally drawn to this,” she said. “I’ve been cooking ever since.”

The nickname “Little Donna” is a play on the popular Little Debbie brand. The Connecticut-born baker said she got the nickname after catering an Emerson sporting event in 2010 with cupcakes and pastries that looked similar to Little Debbie’s trademark Cosmic Brownies and Zebra Cakes.

With the help of an assistant pastry chef, Papastavrou bakes the desserts for Emerson residents. She said that it’s usually “spontaneous planning” that inspires the variety of sweet treats she bakes for Emerson’s dining hall. She finds many of her recipes online but adds her own twist to them, like with her pumpkin cupcakes.

“Some [of the recipes] are from scratch, some are just a variation of a mix,” she said. “I take a cake mix and turn it into a pumpkin cake by adding in pumpkin and spices.”

However, this method of reimagining recipes can sometimes lead to unexpected final products that require further trials.

“I’ve never had a total disaster, but a lot of the vegan stuff requires a lot of experimenting,” she said. “I tried making vegan cookies one time, and they turned out totally dry. Terrible.”

Papastavrou’s creations, however, are more often a success. The desserts she makes for students are often varieties of cookies and brownies, but she also likes experimenting with more distinctive flavors.

“I think my favorite creation was the caramel macchiato cheesecake,” Papastavrou said. “I just love the coffee and the caramel in cheesecake form.”

Multiple students agreed Papastavrou’s desserts are beloved on campus. Considering many students are far from home, freshman Nick Novak said her desserts can offer comfort, harking back to their own families’ baking.

“The rest of the [dining hall] food is hit or miss, but those cookies are always on point,” the visual and media arts major said as he reached for a second M&M cookie bar.

Amid the complaints continuously voiced by students about on-campus dining options, Little Donna’s treats are often the exception to the mediocrity, said freshman Kyle Madigan, who called himself a fan.

“They’re by far the best part of the [dining hall],” said the Madigan, a writing, literature, and publishing major.

Along with taking care of the Emerson community, Papastavrou said she enjoys baking for her own family, including her three children and three grandchildren.

“My kids are all grown up, but they still stop by for dinner,” she said.

Papastavrou said her cooking whims change with the season. She said her family knows that she won’t bake in the summer, when she is on vacation and the kitchen is too hot, but once the leaves change color, she’ll start turning out treats in preparation for the holiday season.

“Around this time of the year, my husband looks forward to apple crisp season,” she said. “It’s like a yearly tradition that I make a giant batch of pie for him to bring to work. And then once it gets to Thanksgiving and Christmas, I’ll go all out.”

Papastavrou lives with her husband in Newton, where she said she also likes to spend time outside of the kitchen.

“I’m an outdoorsy kind of person,” she said. “I love taking my dog on walks out to the woods, and now that the kids are older my husband and I get to travel a lot more.”

She said she wants to continue traveling with her husband, having made trips already to Canada and along the East Coast.

“My goal is to go out West,” she said. “I still want to visit the Grand Canyon. There are just a lot of places in this country that I want to go to.”

But after working at Emerson for five years, she said that she still enjoys being part of the community and interacting with students.

“I’ve gotten to know a number of students here and they’re just so amazing to me. They’re really friendly,” Papastavrou said. “I try to take care of them with the bakery and they’ve gotten to know me. I feel like it’s just a cool atmosphere we’ve got here in the heart of Boston.”