Live theater returns with production of “The Late Wedding” 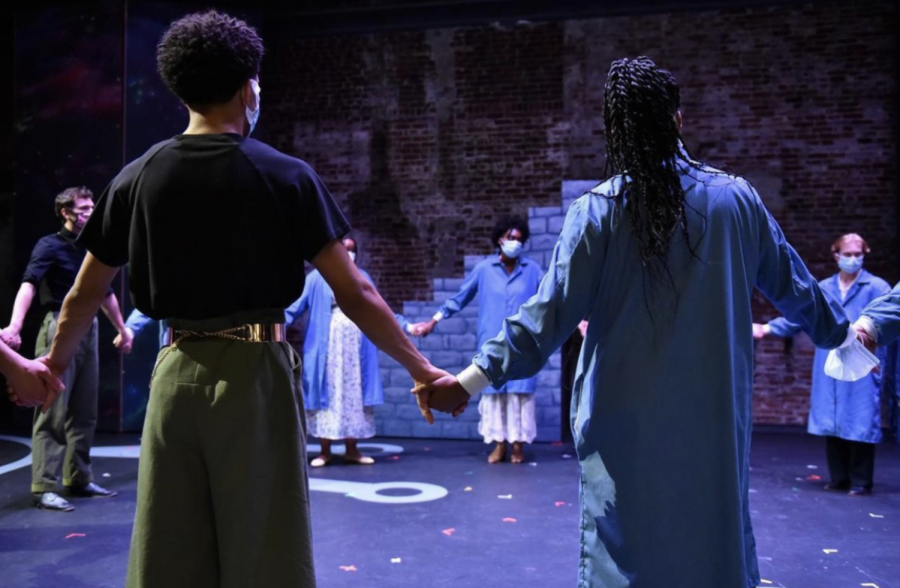 Emerson Stage's production of "The Late Wedding" marked the return of live theater on Emerson's campus.

After 559 days of closed curtains and empty theaters, Emerson Stage kicked off its fall season with a production of “The Late Wedding,” a play about love, marriage, and all of its complexities.

The production ran in the Jackie Liebergott Black Box Theater from Sept. 23-26 and is described as “a fractured portrait of a fractured marriage, as told through a series of interconnected fables, including an anthropological tour of fantastical tribes and their marital customs.”

The cast’s main focus heading into the show was bringing the script to life and telling the play’s story in a touching and memorable way.

“Having been in it and working on it for a month and a half, even I don’t have a solid way of describing it,” Lucas Babcock, a junior musical theater major and cast member, said. “I would say it’s a show about how distance and time affect relationships. It’s compiled from different moments of time, different moments in space, and different places in space which all come together in a heartbreaking kind of way.”

The show takes audiences on a rollercoaster of emotions. Some moments leave you solemn, while others (like the spontaneous dance number or the drunken puppet act) will leave you laughing along with the audience. The show is an amazing space for contemplation on the complexities of our relationships.

Many of the cast members had never been able to join a live theater performance during their time at the college as a result of the pandemic. They said there was an overwhelming feeling of gratitude that the art form they love finally returned in full force.

“This was my first show since 2019, so I definitely haven’t done live theater in a while,” Kwezi Shongwe, a sophomore theater and performance major who starred in the show, said. “I was just so excited to get to perform live again that I was letting all the worries about COVID be for the COVID department. I just wanted to focus on acting and being fulfilled by the job I had to do.”

The cast and crew not only had the added difficulty of performing within COVID protocols, but also experienced an influx of pressure as live theater was reintroduced to Emerson.

“Knowing that we were the first piece of live theater [after the pandemic] for many people was quite nerve-wracking,” Shongwe said. “We already felt nervous because we weren’t used to performing in front of people, and the fact that we had only performed the show without masks once only added to that.”

While the play jumped between realms of time and space with virtually no rhyme or reason, audience members such as sophomore Reagan Finch still connected with and understood its central themes.

“It wasn’t a story that made sense chronologically,” Finch said. “The plot switched up about once every 20 minutes which could get confusing to follow, but what bound it together was just this universal concept of marriage that kept resurfacing throughout the show.”

It is audience reactions such as Finch’s that the cast longed for during the pandemic, making the final success of the show all the more worthwhile.

“I thought the audience reaction was amazing,” Babcock said. “It was fun to finally feel that energy again, especially during opening night, which was just insane. When the lights went down and we were all backstage waiting to go on, we heard the audience start to applaud and all of us were applauding with them. We were just so hyped to get in front of people again.”

During their month and a half of intense rehearsals and successful six performance run of  “The Late Wedding” cast shared many moments which brought them closer beyond the stage.

“I didn’t tell many people this, but the cast was crying backstage at the beginning of each show,” Shongwe said. “When we heard the audience, we’d hug in this big circle, just tearing up the whole time. It became our pre-show ritual that we gave each other hugs before each performance. As soon as Love on the Brain would start, we’d all just start hugging each other, saying, ‘I love you so much,’ ‘You’re amazing,’ ‘You’ve got this.’ It had me wondering: how did we get here from week one?”

Throughout the show, the cast followed a set of strict COVID protocols which allowed for a safe and healthy return to theater for audience members and cast alike. Cast members wore masks on stage unless in an active scene or socially distanced.

“The cast is all fully vaccinated, and I knew the audience members would be wearing masks and were also fully vaccinated,” Babcock said. “I really trusted everyone involved. I knew that everything was going to be handled really well and it was, thank God.”

For many of the cast members, their theater experience at Emerson took on a whole new form during the pandemic.

“It’s funny. This is my third EmStage show, but my first in-person one,” Babcock said. “During COVID, we were stuck in these little studios in front of computers with a green screen behind us. It was tough. We had to use our imaginations a lot more which definitely taught me how to use different parts of my brain, but it was isolating.”

“The Late Wedding” was many of the cast members’ first live production at Emerson. Though having hesitations and doubts would be understandable, there was an overwhelming feeling of gratitude that the art form they love finally returned in full force.

Now that the show’s run has officially come to an end, the cast is left with the lessons and skills they learned from this production to utilize in their future endeavors.

“It sounds cheesy, but my biggest takeaway would be love is love,” Babcock said. “[Our director] Javier made that very clear through the way they treated everyone, the way they casted, the way they decided to put it on its feet in the way they did. It comes together in really weird ways that we may not understand, but we have to respect.”

After having successfully created the production that finally welcomed theater back onto campus, “The Last Wedding” is a show that will be remembered for much more than its complex script or unique plotlines. Instead, it has become the show to invite the public back to the arts with open, eager arms.

“The moment when I felt most fulfilled was at the curtain calls,” Shongwe said. “Seeing people clapping and smiling at us was just this much-needed reminder of the shared love of theater, like a thank you moment from both us and the audience.”