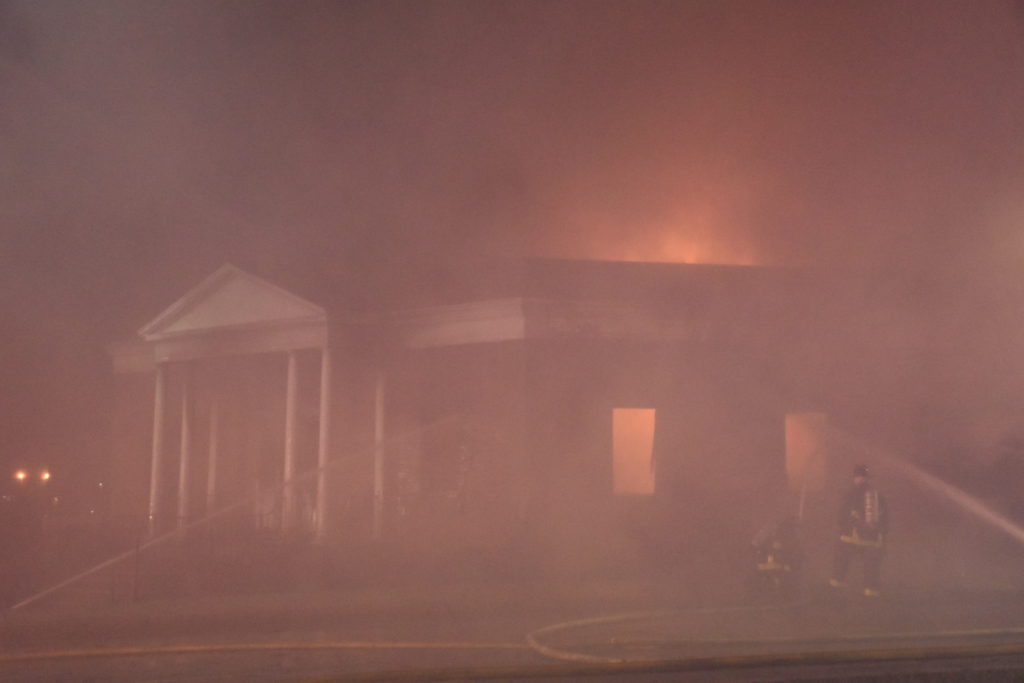 East Boston residents were evacuated after a nine-alarm fire broke out at approximately 3:30 p.m. on March 15. Photo by Anissa Gardizy

The Boston Fire Department ordered evacuations in East Boston on March 15 after a massive fire broke out from a casket company on Bennington Street at approximately 3:30 p.m. The BFD allowed residents to come back to the neighborhood at 10:30 p.m.

Assistant Director of Off-campus Student Services Jeff Morris confirmed in a phone interview that at least 24 students live in the area where the fire broke out.

“We’ve been monitoring the air quality since early evening and it’s at acceptable levels so we’re allowing people to go back into their homes,” he said during a press conference at the scene of the fire.

Finn said the New England Casket Company is divided into three different buildings and remains in a dangerous state.

The Boston Fire Investigations Unit began interviewing employees to determine the fire’s cause.

Finn said BFD will work with Boston Inspectional Services Commissioner William Christopher Jr. to use a crane to dismantle the building and improve access to the interior.

Emerson Journalism Department faculty member Kelli O’Hara reported on the fire for WCVB and arrived on the scene at 4:30 p.m.

“I know a lot of Emerson students live in this area because of the access to transportation and affordable housing, but I don’t know anyone who’s been directly affected,” O’Hara said.

The MBTA used shuttle buses to replace service between the Logan and Wonderland stops—both eastbound and westbound trains. The Suffolk Downs stops is inactive following the evacuation orders and road closures.

The MBTA has not made an updated post on Twitter following Finn’s announcement that the evacuation order lifted at 11:15 p.m.

Associate Dean of Campus Life Erik Muurisepp said in a phone interview that one student living in the vicinity of the fire confirmed they were uninjured and safe.

Muurisepp said the college contacted the student through an emergency database which keeps a record of phone numbers and addresses.

Morris said no students have contacted the Office for Off-Campus Student Services as of 10:17 p.m.

Muurisepp said the college keeps three emergency singles in the Colonial and 2 Boylston Place residence halls available at all times. The Resident Director and administrator on duty manage the emergency rooms.

Director of Student Care and Support Amanda Turnley is the on-duty administrator for March 15.

Muurisepp said no students affected by the fire have requested to use the rooms so far.

Muurisepp also said the college can provide household items, food from the college’s pantry, and coordinate a warm place to sleep for students if necessary.

“[This is] unlike anything I’ve ever seen,” Muurisepp said in regards to the fire.

East Boston resident Linda Parr, 71, said she saw the firetrucks while walking her dogs at around 3 p.m. on Leyden Street.

Parr said the building has been around for over 70 years with dozens of employees.

“It’s a horrible thing. There are many many people who are now out of jobs,” Parr said. “It’s a miracle no one was seriously injured.”

The fire started at approximately 3:30 p.m. and drew hundreds of firefighters to battle it. The fumes from the burning caskets are toxic and the Boston Fire Department has ordered an evacuation of the area.

It is unclear if students from Emerson College have been affected by the fire.

The college does not keep a record of how many off-campus students live in East Boston. Assistant Director of Off-campus Student Services Jeff Morris confirmed in a phone interview that at least 24 students live in the area where the fire broke out.