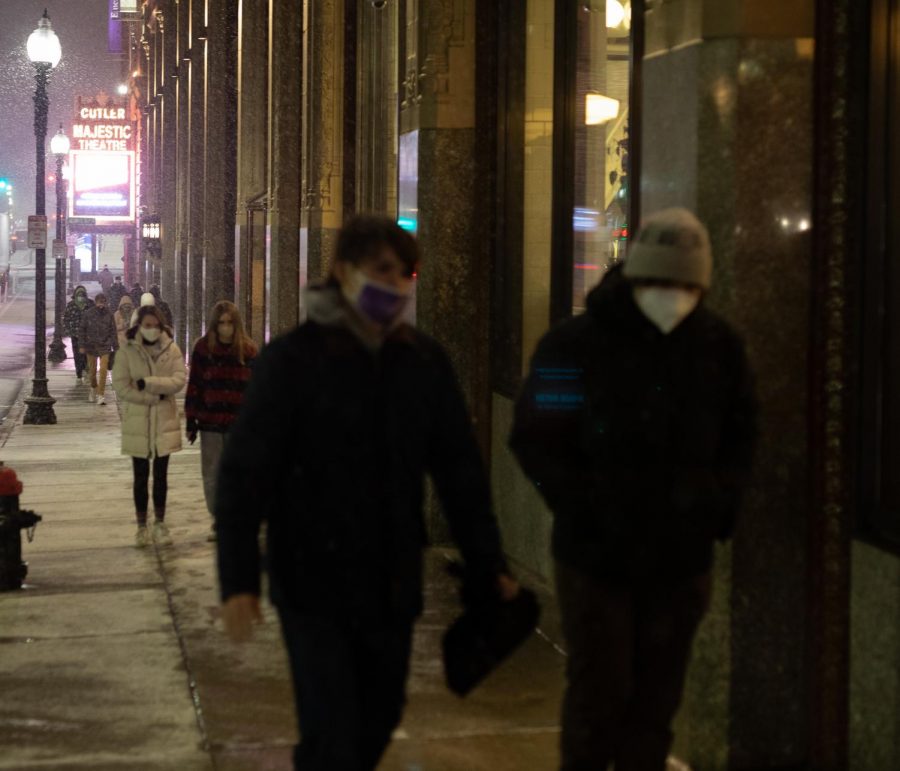 Students walk by the Tatte Bakery & Cafe on the corner of Boylston and Tremont.

The majority of Emerson students living on-campus received their negative COVID-19 test results within hours of moving in between Jan. 21 and Jan. 24. But unlike in the fall semester, students are now weathering their first days of the spring semester—for some students more than a week—in quarantine.

With sparing exceptions—getting meals, picking up mail, working off-campus jobs, and receiving COVID-19 tests—residential students are asked to “continue to limit social interactions” until Friday, Jan. 29, per a Dec. 31 email from the Office of Campus Life. Among the student body, attitudes towards the policy have been mixed, with some skeptical and some supportive, if not entirely enthusiastic.

“I wouldn’t say [I’m not frustrated], but I accept it as the reality we have to deal with at the moment,” Julia Kerr said. “Emerson is being cautious, which I really appreciate. It is safer to have a longer time in quarantine, even if in a perfect world we wouldn’t have to.”

Kerr, a senior visual and media arts major, took a gap semester in the fall after concluding the spring 2020 semester online. She said she was coping with the quarantine and with the week of virtual classes relatively well.

“Obviously I was really looking forward to being back on campus,” she said. “But I’m still learning what I was expecting to learn, even if it’s all from my room for now.”

“It might get frustrating, but I think I’ll be able to handle it,” Frasco said. “I’m kind of introverted myself, so I thrive off of time to get creative or introspective and all that. And [with my roommate] there is always someone to talk to, which is nice.”

For students without roommates, the quarantine has presented a challenging seclusion. Jake Tannenbaum, also a first-year VMA major, said he would be “taking it easy” for the next week, but admitted that the solitude in his dorm was unsettling.

“It’s just kind of socially depriving,” Tannenbaum said. “I woke up at 8:00 a.m. today and the only time I’ve spoken to real life people has been on Zoom, or a passing ‘hey’ in the hall.”

Tannenbaum also expressed his frustration with the fact that the college is not consistently enforcing the stay-in-dorms policy.

“They can’t really monitor the quarantine if you’re allowed to go out [at all],” Tannenbaum said. “It’s not like an R.A. is going to walk you to Blaze Pizza, and then walk you back to your building.”

He said he noticed students taking opportunities to gather with friends by going out to eat—technically allowed by the college’s protocols—at nearby sit-down restaurants.

“The quarantine is only as strict as you personally make it,” Tannenbaum continued. “That can be anything from literally self-imposed isolation, to no change.”

Due in part to the enforcement, or lack thereof, of quarantine protocols, Tannenbaum and others have grown skeptical that the policy will achieve its desired effect: lowering COVID-19 testing rates after move-in. On Thursday, Emerson’s COVID-19 dashboard updated to reflect six new positive tests, bringing the total number of spring semester positives to 31 before in-person classes have commenced.

Nick Johnston, a junior VMA major, said he felt that the policy itself was reasonable, but expressed his concerns that it would ultimately be in vain, especially in light of the more transmissible variants of the virus now confirmed to be circulating in the state.

“They’re doing the best they can, and now there are strains you can get more easily,” Johnston said. “I don’t really think it will do much in the long run. I just hope it does something good.”

However, Johnston said he understood why the college was not enforcing a stricter, lockdown-style quarantine on students.

“There’s a mental health kind of thing that goes into that,” Johnston said. “I’m not saying you should let COVID results go up just so you can get some fresh air. I’m saying there’s only so much time that a person can be confined to one space.”

Other students, like Kerr, are more hopeful that the quarantine will keep cases low.

“I’d rather be more safe than [the college] having to cancel the semester in the middle of February and everyone goes home again,” Kerr said. “If that means we have to give up a week for virtual stuff—in the beginning, when everyone’s just going over syllabuses and getting the hang of things again—I’d rather give it up.”

Students also expressed their concerns that cases will spike after restrictions are relaxed after Jan. 29 and in-person classes begin on Feb. 1.

“I know a lot of kids are not going to want to hang out [socially-distanced] in the Common,  because no one wants to be cold for more than 30 minutes,” sophomore creative writing major Luke Ferraro said. “I’m hoping that cases don’t spike, but I think that there’s a slight chance that we do have an increase, just because people want to see their friends.”

Ferraro said he was “all for” the quarantine, even if the college decides to extend the restrictions for a longer period of time.

“No one really wants to look at it this way, but we need to keep our distance from each other,” Ferraro said. “Hopefully [the quarantine] is going to help…because I know we stuck it out all last semester here. And I’d like to keep it that way.”