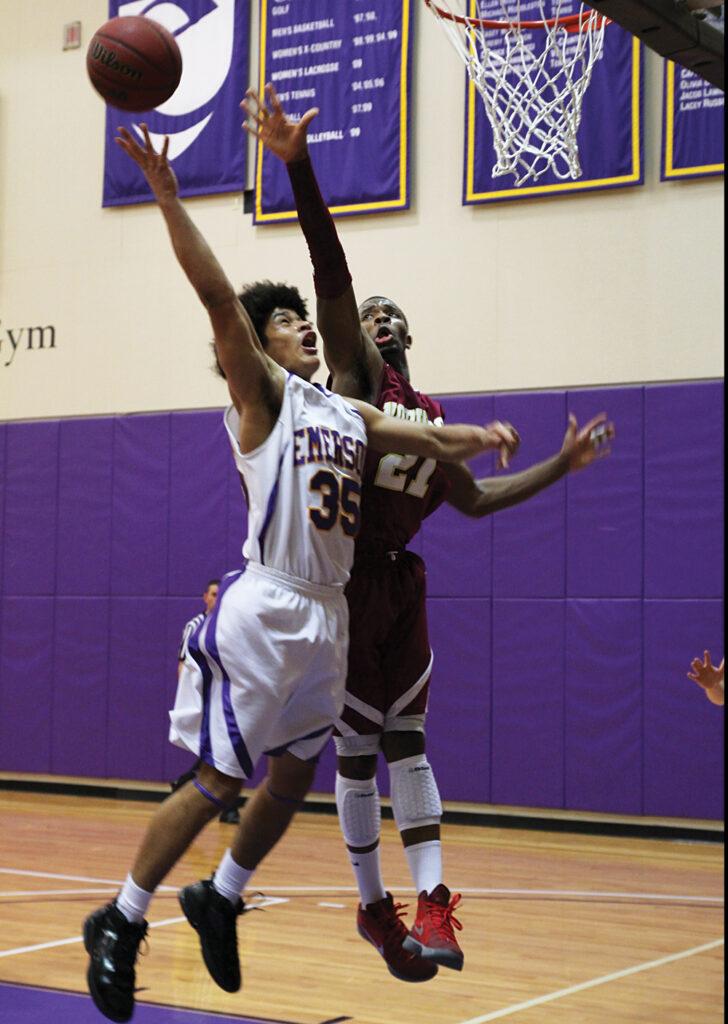 As a shot clanked off the rim, the ball sailed high into the air of the Bobbi Brown and Steven Plofker gym. With a sea of white jerseys under the basket, Emerson men’s basketball was in prime position to grab a rebound and go on the offensive in the second half of a close game.

But as the ball returned from orbit, the Emerson players looked at each other, and a Norwich player swooped in, collected the rebound, and deposited it into the basket.

For Emerson, it was a game of squandered opportunities and missed chances, as the men’s basketball team lost to Norwich 57-53, the team’s 11th consecutive loss.

Norwich played sloppily at first, failing to convert on breakaways and running out the shot clock while the team was in possession of the ball. The Cadets’  free throws, however, gave them the edge. The visiting team went 4-4 from the foul line in the first half, while the Lions went 3-7.

“We’re getting good enough looks,” O’Brien said. “It’s not so simple, but the simple answer is to put the ball in the basket. When we get down early, we’re behind the eight ball, and it takes so much energy to get even.”

The Lions, who shot 28 percent from the field in the first half, have lost six of their previous eight games by 10 or fewer points. Their record stands at 1-16, and a 1-10 league record puts them at the bottom of the Great Northeast Athletic Conference.

Fifty-seven points is the lowest amount scored by Norwich in a win this season.

Bilali Kalilou-Mack, who led Emerson in both points and minutes said that the Lions played weakly on the boards as well, allowing Norwich to score easy points.

“We played well defensively,” the junior said, “but we weren’t boxing out well enough. Those times we couldn’t box out cost us.”

Kalilou-Mack recorded a double-double, finishing the night with 21 points and 11 rebounds.

The struggles to rebound  were apparent when two Emerson players went up for the ball at the same time, only to collide under the basket and turn the ball over.

Freshman forward Patrick Lowndes, who contributed nine points and three defensive rebounds, also had two turnovers early in the game. He noted the mistakes as reasons for the loss.

“Two turnovers in the first five minutes are points you can’t get back in the last five,” Lowndes said.

The Cadets capitalized on the Lions’ errors and, with timely shooting, extended their lead. An NBA-range three by Tom McDonald brought the score to 40-30.

Aggressive play by Emerson in the second half kept the Lions within 10 points of the Cadets. Freshman point guard Eli Kell-Abrams and Kalilou-Mack collaborated in a diving effort to recover a loose ball after a Norwich player had swatted it away. The play set up Lowndes, who drew a foul off of a Cadet defender and sunk both free throws, narrowing the gap to eight points.

Emerson solidified its play enough to pull within three points of the Cadets as a deep three-pointer that banked high off the glass by senior guard Alex Dempsey with 18.4 seconds left in the game narrowed the score to 54-51 with Norwich ahead. A quick Emerson foul followed by two Norwich free throws put the Lions in a five point hole.

The Lions made one last effort by fouling to save time, but the Cadets converted on their own free throws and secured the victory.

With the loss, the Lions’ losing streak was extended to 11. They will take to the court tonight in another home game against GNAC rival Rivier.