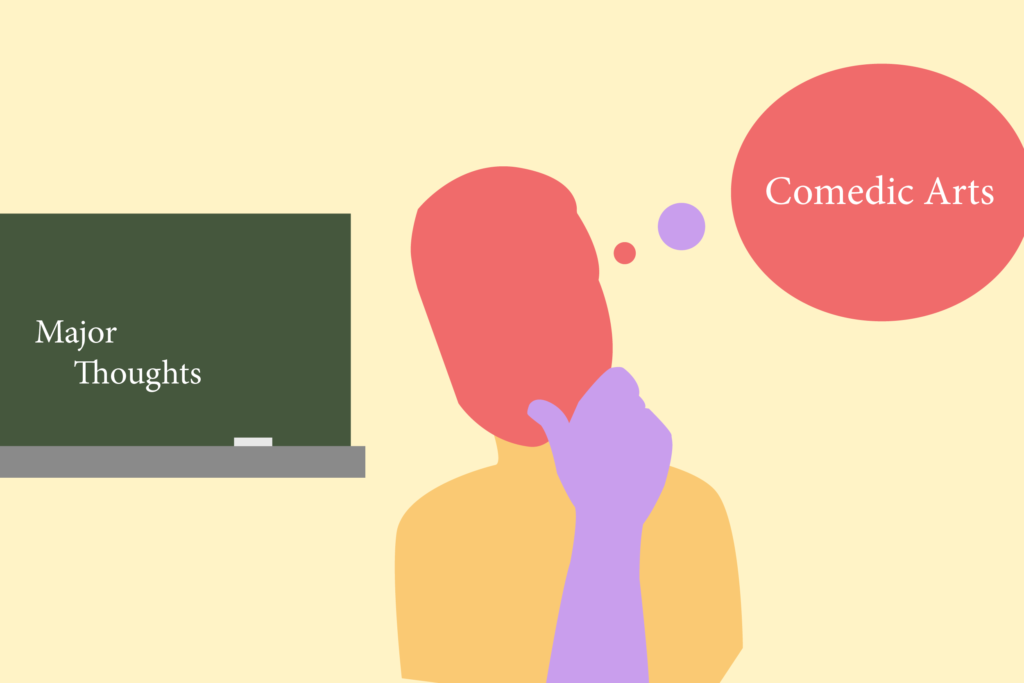 I can’t help but think that having a more diverse mix of students and teachers would do wonders for not only comedy, but nearly everything at Emerson. / Illustration by Ally Rzesa

The notion of a comedic arts major may seem preposterous to many—some may even consider it a joke. I’ve heard countless people say, “You can’t teach comedy. It is just something that comes naturally,” since I came to Emerson. I explain to peers that comedy, just like anything else, has techniques to further your understanding. Whether it be the proper way to format beats in a sketch or analyzing the reasons why people laugh, there is a lot to learn.

At Emerson, I am president of a sketch comedy troupe, Derbyn Comedy, and this semester I wrote, produced, and directed my own comedic web series, Road Work, through EIV. Clearly, I have an intense interest in the writing and production sides of comedy, so my perspective on the major will come through that lens—though I will try and address my peers’ concern the best I can.

As one of the 25 people who joined the major since its conception, I’ve learned a lot about how to get the most out of the program. You have to work for everything you want in the major.

For some time, other majors at this school did not treat us with respect, so the adjustment to college was a little rough for us. It didn’t help that the major was not fully planned out when it was originally created in 2016, and is consequently filled with empty promises that render many of us feeling unprioritized. Despite the negatives, I believe Emerson is a thriving place for young comics to get their start due to its opportunities to produce and perform. However, this is largely due to Emerson’s previously available amenities like Emerson Channel, EIV, comedy troupes, and theater troupes, in which each provides a chances to display our work that classes don’t provide.

Many classes geared toward the comedic arts majors are poorly planned, mismanaged, and unfulfilling. Classes like “Why Did the Chicken” have curriculums that barely touch on necessary comedic studies. Students don’t feel challenged comedically and feel the class teaches next to nothing.

Nevertheless, these classes compensate for their pitfalls with some of the most talented professors at Emerson. Mike Bent is one of the most comically intelligent people I’ve ever met. His insight into comedy redeems the class. His expansive knowledge of the comedy sphere of past and present and comic success in the industry gives his students a valuable perspective on comedic structure and form.

The comedic arts curriculum attempts to provide students with a taste of every type of comedy, and because of that people within the major can have wide spanning interests. The school’s desire to please all students, without having proper resources to create specialized classes, leads to the school mangling a lot of classes together and making students feel like “test runs.” For example, our production class, Modes of Comedic Production––which, despite its flaws, was one of my favorite class within the major––is both a field and studio production class. Those topics are too broad to cover in a single class.

Besides the eight original classes for our major, comedic arts majors must take three writing and production classes their junior year. Because of this, students feel like the Frankenstein’s monster of the other majors offered at the school. Many students wish to take classes like Acting for the Screen or Advanced Studio Production, but registration restrictions prevent comedic arts students from enrolling in them.

The administration needs to focus more on out-of-class work for students. Opportunities like film festivals, EmStage, internships, and the JPC are intended for other majors. Our amenities are restricted to a small room in the Tufte Performance and Production Center. The college needs to allocate more money towards creating new and specific amenities for comedic arts students.

While I give the major a lot of flack, it’s only because I want it to improve. Students will feel their degree is more significant if adjustments to the curriculum continue. Personally, comedic arts gave me the jump-start I needed to know exactly what I want to do in the comic world, but I know many other students feel very differently.

The comedic arts major shows improvement each year, and now it seems far better and more hopeful than it was in 2016. It can feel like the people who spearhead our department don’t listen to us at times, but overall they want the best for us. Recently, they started a service called “Mondays with Martie and Matt” where president Martie Cook and Vice President Matthew McMahon sit and listen to any complaints or concerns we have about the major.

This listening is the exact type of dedication we need in order to get the comedic arts major where it needs to stand. The school recruited some of the best professors—Tom Kingdon, Erin Schwall, Mike Bent, Manny Bassaneese, for example—to help construct the major, and they truly put their heart and soul into their classes. I have hope for the future of this major—the opportunities that the freshmen receive today are more plentiful than when I first enrolled in the major. But there is still more work to do and growth to see.