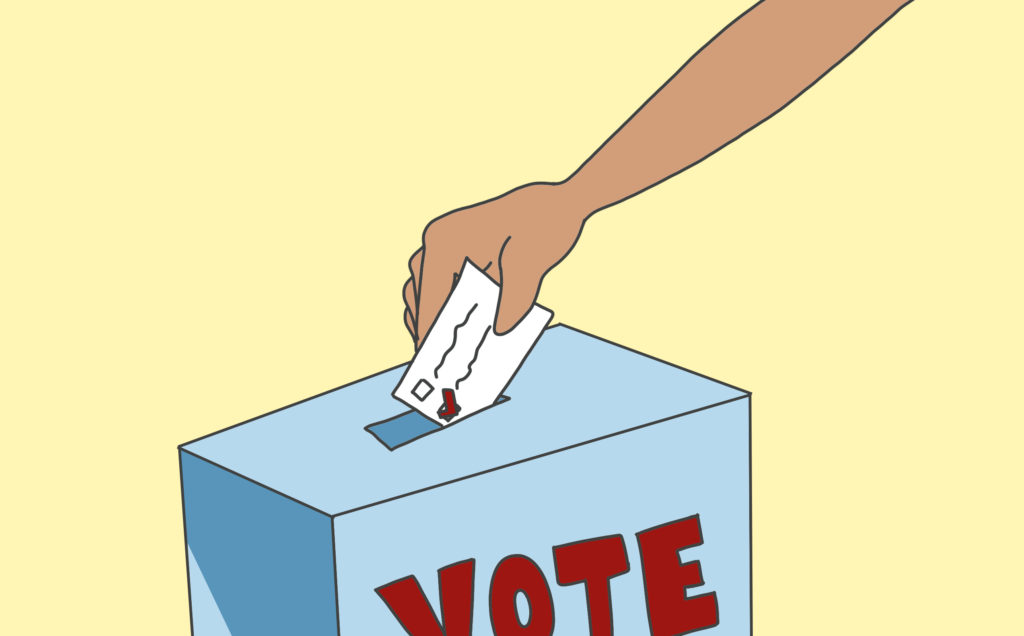 "When anyone casts their ballot in a normal year, they are fulfilling their civic responsibility as an American citizen. But this November, for the first time in a long time, there is a pandemic plaguing the U.S. during a presidential election." Illustration by Laura King

In November, transgender rights will be on the ballot. A 2016 law prohibiting discrimination based on gender could be overturned by a veto referendum, due to the concentrated efforts of bigots and fringe voices last year. But our generation’s involvement in politics can ensure that such discriminatory actions are defeated, even in the face of such a damaging and ignorant referendum.

The Massachusetts ballot initiative process is relatively open and and simple, requiring a set number of signatures and approval by the state government. While this means that progressive measures like marijuana legalization can pass, it also means that regressive policies are occasionally considered as well. That is the case this year. As Emerson students, we have often rallied together to support our transgender classmates. In 2013, we even made headlines when Phi Alpha Tau successfully raised money to circumvent outdated insurance policies to help pay for one member’s surgeries. Now we must make headlines again, this time by showing once and for all that our fellow classmates and citizens deserve respect and safety.

Another initiative on the ballot would impose a tax on citizens with incomes over 1 million dollars to increase funding for public high schools and colleges, with some funds allocated to fixing roads, bridges, and public transportation. Emerson students know the unbelievable cost of college tuition, and if voters approve the measure the state would be taking a large step in making education more accessible. Plus, the T would get some much-needed renovation and improvements, which we can all agree demands attention. Unfortunately, conservative groups have already filed a lawsuit to derail this initiative, opting to go to court instead of the ballot box. We cannot allow their greed to stop our progress.

Though these two initiatives are definitely on the ballot, a few more are still undergoing the review process. These potential questions would significantly alter work and life in Massachusetts, an important consideration for anyone staying in the state after graduation. One would increase the minimum wage to $15 an hour, and another would provide paid sick and family leave. If these measures pass, students may have more in their bank accounts to rent apartments and take public transportation, and local businesses would benefit from our newfound purchasing power. If you fall ill, sick leave ensures you don’t risk your losing job by staying home. Yet powerful business interests are already spending hundreds of thousands of dollars trying to defeat the measure, something we cannot allow.

Time after time, our generation has failed to show up at the ballot box. In 2012, about 46 percent of millennials turned out to vote. In 2016, about 50 percent did. While this increase seems promising, it’s disappointing compared to the 69 percent of baby boomers who voted in both elections. With so much happening on the news, it can be hard to focus on local issues and how they affect you. Yet we must recognize that politics affect everything, and that we millennials have the voting power to play a key role in this fight.

In the 2016 referendums, public school defenders struck down charter school expansion 62 percent to 38 percent. Animal rights supporters, determining that humans should end their cruelty to animals, won with a stunning 78 percent victory. Young voters and civil rights advocates, who oppose mass incarceration, legalized marijuana with an 8 percent margin. These huge victories demonstrated that the people of Massachusetts were resolute in their vision of a progressive state.

Now our generation faces a new challenge. We must declare—decisively and absolutely—that transgender rights are human rights, education must be accessible, transportation is worth funding, and workers deserve earnest pay for the work they do.

These will remain out of reach if we don’t register to vote. So please, if you’ll be in the state this fall, take a minute to fill out a registration form to vote in Massachusetts. Far more than just names are on the ballot.