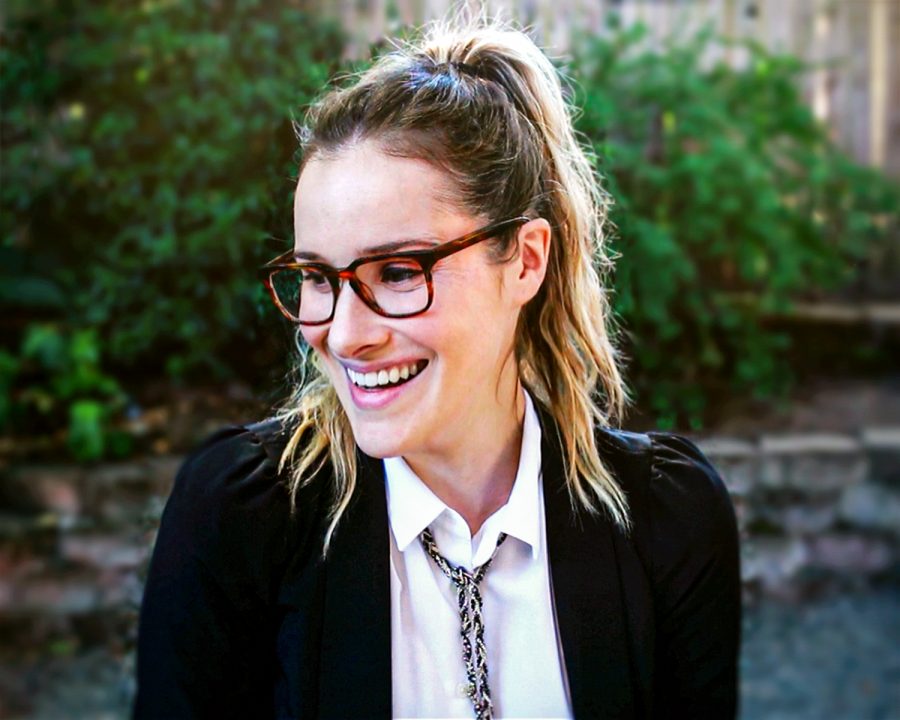 Margot Wood ‘08 spent years working in the publishing industry after graduation, and now her debut novel set at Emerson College, Fresh, is set to be published in August.

Wood’s new novel, which is a retelling of Jane Austen’s Emma, will be available in hardcover and ebook starting Aug. 3, 2021. Fresh is described as “a hilarious and vulnerable coming-of-age story about the thrilling new experiences––and missteps––of a girl’s freshman year of college,” on Wood’s website. The publisher of the book is Abrams Books, the same company that published the Diary of a Wimpy Kid books by Jeff Kinney and the Splintered series by A.G. Howard.

The book follows the story of Elliot McHugh as she starts her college experience at Emerson. Living in the Little Building, Elliot tries to figure out what she wants to do with her life while also discovering what she likes—in bed.

Part of Elliot’s journey is declaring a major. Wood, a marketing communications major, knew she had to justify making Elliot undeclared thanks to the rarity of undecided majors at Emerson.

“There is a part where she explains why she still chose to go to Emerson versus going to Ohio State without an idea of what she wanted to do,” Wood said. “She knew she wanted to work in media of some kind. She loves books, TV, movies, all this stuff. She just didn’t know.”

Wood said she knew the publishing industry well and made connections with many authors, but never saw herself writing a book.

Aside from a few writing classes at Emerson, Wood had no writing experience.

However, after getting married and losing her father all in the same year, Wood said she experienced a shift in her life that drove her to want to write.

“I suddenly felt this sense of urgency [and] need to put my mark on the world,” Wood said.  “Before I hadn’t really ever felt that drive to leave a legacy. But then watching my dad die, who was an extremely healthy person, and knowing that…he always wanted to be remembered for things. Suddenly, once that happened, I was like, ‘I gotta write. I gotta write a book. I gotta do it.’”

Working in publishing was also something Wood didn’t see coming. Originally enrolling at Emerson for theater, she quickly changed to marketing communications. Wood said if she had Emerson’s current array of majors, she would have majored in business of creative enterprises.

Finishing her senior year off at Emerson’s Los Angeles program, Wood was set to have a marketing internship for It’s Always Sunny in Philadelphia. Unfortunately because of the 2007-2008 Writers Guild of America strike, Wood became an intern at Ford Models as an administrative assistant.

Although her plan was to stay in L.A. after finishing her internship, Wood instead moved back to her hometown of Cincinnati, OH.

“Because I ended up in this awful, awful internship [and] had no interest in the modeling industry, I was so bored for those six months that I was in L.A.,” Wood said. “I was miserable.”

Knowing L.A. wasn’t the right place for her, Wood decided to go visit New York City where her old college friend and now husband, Sean Willis ‘08, lived. After Willis showed her around the city, she decided to move there in the summer of 2009.

“I quit my job in the middle of a recession, and just moved to New York with no plan, no job,” Wood said. “My very first job in New York was at this tech startup that did custom consumer fan platforms.”

The startup, which has since been sold to another company, led Wood to help Penguin Random House run their young adult book community at the time, Random Buzzers. This is where she was first exposed to young adult literature.

“I was given this community to manage and the first thing that you want to do when you’re a community manager is obviously immerse yourself into the community,” Wood said. “I ended up reading The Hunger Games, and I was like, ‘Oh, shit. This is so good,’ and I flew through the entire series. Read all of Divergent, read all of Lauren Oliver, read all of everything I could get my hands on. That was when I was like, ‘Oh, my God, I found my thing.’”

After discovering this new passion, Wood went to work for HarperCollins Publishing Company to start up their young adult community, Epic Reads. Wood worked at Epic Reads for five and a half years, saying it was the best job she ever had.

“It was really, really amazing,” Wood said. “That’s when I got to meet, the second day on the job, I met Veronica Roth and her agent. Insurgent had just come out and she was signing a bunch of stock, and so I just sat in the room with her and hung out with her while she was signing stock. We ended up becoming really good friends. We’re still really good friends today.”

Wood later ended up signing with Divergent author Veronica Roth’s agent, Joanna Volpe, when she finally started writing Fresh. Before she signed with Volpe, Wood talked to another agent who she said was anything but encouraging.

“I pitched him this idea that I had, and he was like, ‘nobody will ever buy this because it’s about girls discovering their sexuality in college, nobody’s gonna buy this, nor is any publisher going to know what to do with it,’” Wood said. “That really sidelined me for… like two years.”

Eventually, she found Volpe, who thought Wood’s idea was worth publishing. Wood started working on her new book around the same time she left Epic Reads in 2017. While working on her novel, Wood rediscovered a letter she wrote to her younger sister that inspired her.

“I wrote this letter to my little sister and was like, ‘Here’s every single mistake that I made. I don’t know what you’re going to learn from this, but here’s all the dumb shit I did that you shouldn’t do,’” Wood said. “When I was trying to come up with something to write, I found the letter again. I reread it and I was like, ‘Oh, there is something to this.’”

To fill that void, Wood decided to write Fresh, which she described as a comedy first and a romance second.

“All of the sex scenes in my book are all in the service of comedy,” Wood said. “Except for the one where it’s more of the romantic scene, but even then, that’s the one where you don’t actually get to see it, because it’s private.”

As she began writing Fresh, the protagonist came to remind Wood of characters like Emma Woodhouse from Jane Austen’s Emma and Cher Horowitz from Clueless, inspiring her to write a queer retelling of the Jane Austen classic.

“I specifically requested a copy of the official description not have ‘queer’ in it because as a marketing person, it’s odd when we don’t ever describe romance novels between cis hetero couples as being a straight romance,” Wood said. “But we do this thing where we’re like, it’s a queer romance if it’s gay.”

Wood said that Gayle Forman, the author of If I Stay, described the book as being like champagne bubbles. While her novel is meant to be fun and “fizzy,” it does cover issues such as crushing student debt and sexual assault on college campuses.

Wood said she has no plans for a sequel right now, but she would like to start focusing on writing more. In the spring, Wood plans on switching from her full-time job at Oni Press in Portland as the Director of Sales and Marketing to working part-time to make more time to write.

As the world awaits the release of Fresh in August, Wood encourages students to read more books. Fresh can be pre-ordered on sites such as Barnes & Nobles and Amazon.