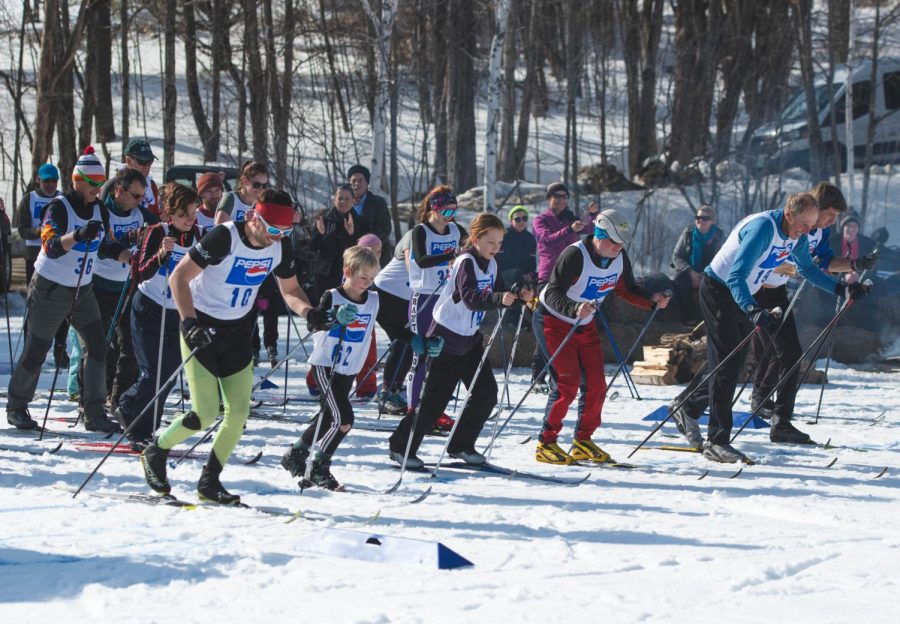 Racers from all over the community joined in the decades-old Wendell-Judd Cup.

MARLBORO, VT—Dozens of Marlboro community members gathered on the campus’s soccer field Sunday to cheer on over 70 skiers and snowshoers competing in the Wendell-Judd Cup.

People crowded the finish line, clutching hot chocolate and pizza cooked in a student-constructed stone oven next to the field. They were celebrating what might be the last edition of the 10 kilometer race, a tradition that has endured for decades.

Spencer Knickerbocker, the ski director at the college, crossed the finish line to a cacophony of cowbells and applause with a time of 41 minutes and 15 seconds.

“I think this is our biggest turnout ever,” Knickerbocker said in an interview after the race. “We had over 70 people registered to do the whole race, which is awesome. It was fun, it was warm, it was sunny, it was great.”

As the ski director, Knickerbocker said he worked 10 hours per day this week grooming the trails in preparation for the race.

Knickerbocker’s prize for the victory was a ceramic cup engraved with the letter ‘W’.

Leah Silverman won the women’s category with a time of 45 minutes and 19 seconds despite what she described as less than ideal snow conditions.

“It was definitely mashed potatoes, but we work with what we got,” Silverman said in an interview after the race. “Of course number one is have fun and push yourself and do your best, and I think we all succeed in that area today.”

Matt Ollis, the only racer who preferred snowshoes to skis, placed first in the pedestrian category. As a math professor at the college snowshoeing in what he said is at least his tenth Cup, Ollis is familiar with the tradition behind the Cup and hopes it goes nowhere anytime soon.

“The trails are beautiful,” Ollis said in an interview. “It’d be a real shame to see it go, so I’m really hopeful that it will be going on next year. I’ll still be living down the road, so I’ll hopefully be competing again next year.”

The race began as a tradition in 1965 when Marlboro Professor Dick Judd decided he wanted to start an outdoor event at the college. At this time, Ted Wendell, who was a math professor at the school, left Marlboro to attend a graduate program at University of Washington. Because of his departure, Judd decided to title the ski race “The Ted Wendell Memorial Cup”.

Once Wendell returned from graduate school as the full-time dean of students, he said they dropped the memorial part. After Judd died in 2007, they renamed it again to be the “Wendell-Judd Cup”.

In the years that have followed, the cup has provided an opportunity for a small community to grow even closer.

Wendell started Sunday’s race by ringing a cowbell, beginning another year of an event he has watched evolve for 55 years.

“In the very, very first years, there were just a few people,” Wendell said in an interview. “Actually, there were three categories. There were skis and snowshoes, and after everybody’s skied or snowshoed anyone who just wanted to plod along in their boots could go as well. That kind of chewed up the course, but who cared at that time?”

Wendell’s fond memories of the event include seeing his daughter win the junior category one year and eating post-race meals at the Judd household.

“It has been a terrific race,” Wendell said. “It has been really a fun event for Marlboro over the years. . . It has been an unbelievable and funny thing in my life.”

According to Wendell, Winter Olympics Cross Country Skiing silver medalist Bill Koch started his career in the Wendell-Judd Cup. Koch, who is the stepson of former Marlboro College President Tom Ragle, won his first race at 12 years old while competing in the cup.

“When he was interviewed after [the Olympics], they asked him ‘what was the first race you ever won?’” Wendell said. “He said, ‘the Wendell Cup at Marlboro College!’ That’s our moment of glory.”

At the 1976 Winter Olympics in Austria, Koch became the first American to medal in cross-country skiing and remained the only American to receive a medal in this category until 2018.

Director of Outdoor Programs Nikolas Katrick is in his third year in the position, but he said he’s been involved with Marlboro outdoor programs since 2003. In those 17 years, he said he’s come to recognize how important the race is to the community.

“It’s a blending of the college, plus the town, and many people in the region, and skiing is one of the things we do in southern Vermont,” Katrick said in an interview. “It’s a very family friendly and really community building event, so it’s exciting to be in the middle of all of that with some fantastic staff who work for the outdoor program.”

Malcolm Moore founded Marlboro’s outdoor programs and raced on Sunday, skiing the Wendell-Judd Cup for what he said is the 12th or 15th year, which included three or four wins. He said he began the program with the goal of teaching the student body about various outdoor activities including skiing, whitewater rafting, and biking.

Moore said he is proud of the growth of the program he jumpstarted. Under Katrick, the outdoor programs are now scheduling world-wide expeditions, including one to Iceland this year.

“I think it’s wonderful what they’re doing now,” Moore said. “It’s evolved somewhat now. It’s much more of a formal sports program, with races like this that have bigger crowds of participants.”

Despite the lack of certainty that surrounds the future of the event, Biology Professor Jaime Tanner is remaining optimistic about the race continuing regardless of what happens to the college.

“I have a hard time believing this is the last one,” Tanner said in an interview. “I would be shocked if the community didn’t come together to make this happen.”