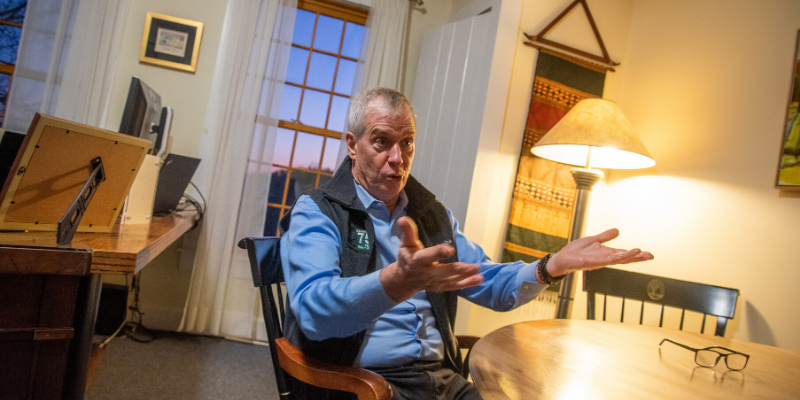 Marlboro College President Kevin Quigley told The Beacon that students and staff at Marlboro's graduate school should have been aware of the school's track to closure.

Business Manager for Graduate & Professional Studies Danette Reynolds and Assistant Director for Teaching and Learning Kim Lier painted a picture of a graduate school left in the dark as Marlboro College secured a potential merger with Emerson College.

In a joint phone interview, Reynolds and Lier, staff members at the graduate school, said that while they were aware of the agreement between the colleges, the first time they heard of the graduate school’s closure track was last week after reading the news in a story published by The Beacon.

“We had a couple of our programs put on teach-out,” Reynolds said. “But it was never formally communicated to us what was happening. Never. We had no idea.”

“They should be aware,” he previously said. “They knew they were on a teach-out.”

Quigley, in a phone interview with The Beacon on Friday, again insisted that graduate students and staff had been informed of the school’s closure track.

“The college has been very clear that the graduate school has been involved in a teach-out of its programs,” Quigley said. “I find it surprising that they say they didn’t know.”

Quigley and Emerson College President M. Lee Pelton announced a merger between Marlboro and Emerson two weeks ago, that will see Marlboro gift Emerson its $30 million endowment and ownership of its campus, valued at $10 million. Marlboro’s students and tenured and tenure-track faculty will have the option of going to Emerson as a part of the soon-to-be Marlboro Institute of Liberal Arts & Interdisciplinary Studies.

Marlboro students, staff, and faculty previously expressed concerns regarding the future of the Vermont campus and the degree to which they would be involved in any decision making.

As explained by Quigley, the graduate school’s teach-out track entails providing all currently enrolled students with the appropriate resources to finish their degrees at Marlboro. However, he also detailed a faint possibility of Emerson taking on some of the school’s programs, should its administration express interest.

If not, Quigley said Marlboro would be ethically obligated to find other accredited institutions for graduate students to finish their degrees at, if the school closes before they graduate from Marlboro.

Alongside Lier, who has been at Marlboro for eight years, Reynolds said that the graduate school’s expected closure hadn’t even been mentioned in recent weeks.

“At the all-staff meeting, it was asked if the graduate school was closing and all [Quigley] said was that he was hopeful we could work something out with [Emerson College],” Reynolds said. “He never said the graduate school is closing, or even on a teach-out.”

The graduate school suspended all admissions for the 2019-20 academic year, seemingly in accordance with a teach-out. But Lier said staff were under the impression that the suspension was put in place temporarily so the school could be shifted to an online format. In 2017, the graduate school’s physical campus, located in downtown Brattleboro, officially closed its doors, prefacing the online relaunch of its programs.

Despite the teach-out, a new group of students were admitted and began studies in fall 2018.

“Last fall, we took in a new cohort of students,” Reynolds said. “Now they’re kind of scrambling, figuring out, ‘what are they going to do?’ So, that doesn’t sound like a teach-out, does it?”

Reynolds was hired in Jan. 2018 and told The Beacon that during the hiring process the graduate school’s closure track was never mentioned to her.

She also said a new head of graduate school admissions was brought on shortly after she was hired, a move she said seemed inconsistent with a teach-out.

But Reynolds and Lier said news of the school’s imminent closure came as no surprise.

“[The graduate school] hasn’t been a priority for years,” Lier said. “We have felt ourselves to be on the chopping block for years—several years.”

As for the students of the graduate school, Reynolds said their fate still remains unclear.