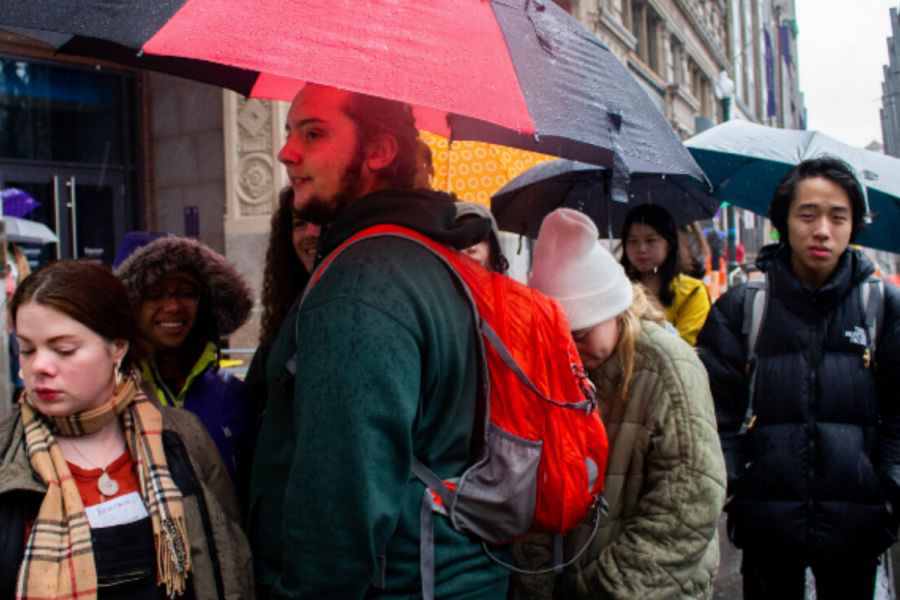 Approximately 40 students and faculty from Marlboro College visited Emerson Sunday to tour Emerson’s campus and learn more about the college before the planned spring 2020 merger.

Guides at Emerson’s Visitor’s Center led Marlboro students on a condensed tour of the campus due to inclement weather, which delayed them by over an hour. As part of the tour, the Marlboro students also got to visit a student’s dorm room in 2 Boylston Place. Marlboro freshman Sarah Mayschuldz said she was impressed by Emerson’s campus but was still mourning Marlboro’s campus.

“It feels like a big loss,” Mayschuldz said. “But a lot of this campus is very impressive. But there’s also [Marlboro’s] amazing library that I’m really going to miss.”

On Nov. 7 President M. Lee Pelton introduced the possible merger with Marlboro in a town hall announcement. Since then, both colleges organized working groups to handle different aspects of the merger and Emerson administrators traveled to Vermont last week to meet with the community for the first time since the announcement.

At the same time as the students toured the campus, Marlboro’s faculty members met with Provost Michaele Whelan and Emerson’s deans in a closed meeting. There, Whelan and the Marlboro faculty discussed Emerson’s academic structure and how to address Marlboro students’ needs.

“[The meeting] went really well,” Whelan said in an interview “We had met with faculty at Marlboro before now this was a slightly bigger group with all the deans … We have to be patient about [the merger]. We’d like to know all kinds of details, but that’s going to take us some time.”

Marlboro faculty members said they had mixed opinions about whether or not they would come to the college for the fall 2020 semester. Psychology Professor Thomas Toledo said he is unsure if he will come to Emerson.

“I seriously would like to see real synthesis of our program and Emerson’s,”  Toledo said in an interview “That’s going to take probably five to 10 years…This is not the habit that we’re in. And so I can’t even imagine what I would do starting September.”

“For some people this is their second time coming down but it’s not really kind in a conversational format yet,” Rubinstein said in an interview. “ So we’re looking forward to starting conversations.”

After the meeting and tour, the two groups regrouped for lunch in the Jackie Liebergott Black  Box Theatre where Pelton, Marlboro Trustee and ArtsEmerson funder Ted Wendell, and Marlboro President Kevin Quigley gave remarks about the two institutions coming together.

“The alliance is not simply Marlboro coming to Emerson as the host, but [an alliance] between two organizations, not a single organization,” Pelton said in an interview after the lunch. “Both Emerson and Marlboro will benefit from the alliance in numerous ways.”

Pelton also emphasized Emerson’s desire to support Marlboro’s students regardless of their decision to attend Emerson in fall 2020.

“We want to be as supportive as we can on behalf of Marlboro, no matter what their decision might be,” he said.