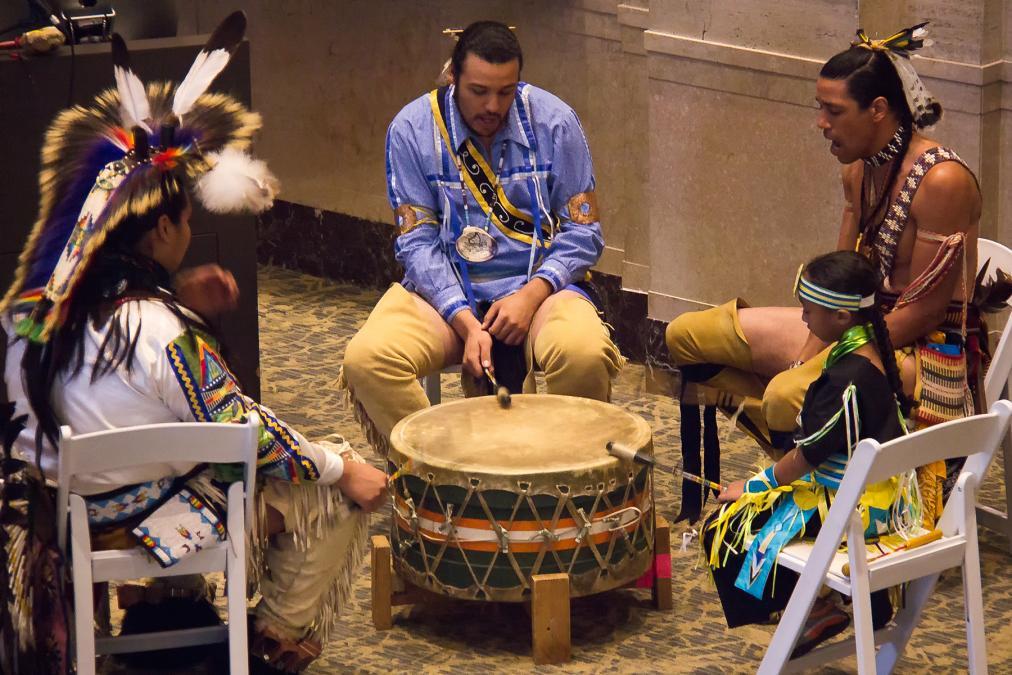 Native American performers from across the U.S. danced into the Bill Bordy Theater to the beat of a drum during the Native American Cultures Celebration on Friday, Nov. 16.

Jeremy Heflin, English language learning supervisor in the Office of Global Engagement and event organizer, said the celebration is an opportunity for people to discuss heritage. The Office of Internationalization and Global Engagement sponsored the third annual event to promote a deeper dive into cultural studies.

“I think it’s important for people to recognize the diversity and break apart the concept of a single Native American identity,” Heflin said. “I hope the event invigorates the students to learn more about what they can do to educate themselves as they find the past.”

The celebration drew around 50 students and 20 faculty and featured speakers from the Mashpee Wampanoag tribe, headquartered in Mashpee on Cape Cod. The event was open to Emerson students and staff, along with a few select guests.

“Prior to us having our own police department on tribal lands, we’ve had our people beaten repeatedly, shot and killed by the police,” Baird said during the event. “We have not had any problems with policing since we’ve been able to move over to tribal policing.”

Mashpee Wampanoag tribe member Sassamin Weedon, dressed in a rainbow-colored shawl, mimicked the movements of a butterfly while dancing.

“I love opening new doors for people, and I feel like it’s a good idea for people to experience our culture and understand what land they’re on and the people that own the land,” Weedon said in an interview.

Freshman Kate Proctor said it is important for the college to host cultural events like the Native American Cultures Celebration.

“I’m not used to being immersed into different cultures because white culture is pretty much all around me,” Proctor said. “For a college to host the event, I think it’s especially important because Emerson students want to learn and are open to new cultural experiences.”

Heflin ended the event by reminding the community of the lasting impacts of the day’s events celebrating Native American culture.

“I hope you understand that what we’ve enacted today is something we will continue to do,” Heflin said to the crowd. “We look forward to next year and the years to come of inviting Native American cultures.”