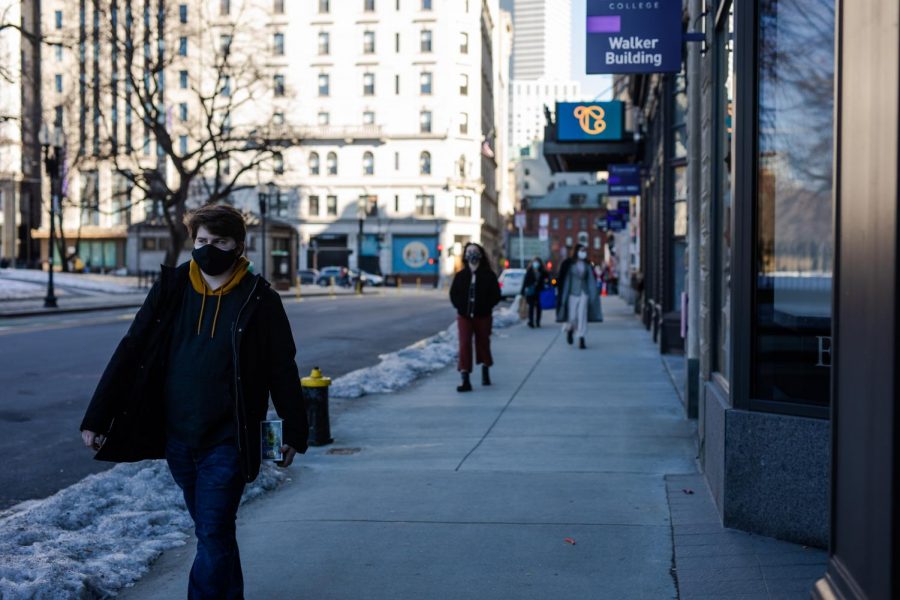 Emerson is now mask-optional in all campus spaces except classrooms.

As announced in the Feb. 18 campus-wide email correspondence, the college eased its indoor mask policy everywhere except classrooms, the Center for Health and Wellness, and Counseling and Psychological Services, on Monday, to which students have expressed mixed feelings.

Some students are reluctant to remove their masks, while others have taken the opportunity to roam campus mask-free.

Heidi Garmise, a first-year visual and media arts major, does not plan on taking her mask off due to COVID fears. Garmise admitted to worrying that a lack of masking will result in a more rampant spread of the virus.

“Besides when I’m eating, I usually always keep my mask on,” she said. “I don’t know if I’m the biggest fan of [the mandate] being lifted right now. I’m in [Emerson Dance Company] and we were talking about trying to keep masks on because we don’t want anything to happen before the dance concert.”

The mask optional policy applies to all campus spaces except classrooms, which will likely keep them in place until at least the end of the academic year—something that first-year writing, literature and publishing major Megan Marshall believes is unproductive.

“I don’t really see the point,” Marshall said. “It would have been beneficial just to keep masks [everywhere] for the rest of the school year and then start fresh without them next year.”

Addison Wallace, also a first-year writing, literature and publishing major, said she will be keeping her mask on, but will not judge others for taking theirs off.

“There’s a new variant coming out, so I don’t know exactly how I feel,” Wallace said, in reference to the new BA.2 “Stealth Omicron” variant that has emerged in recent weeks. “I’m comfortable with [the decision to unmask]. If someone were to walk by me without one, I’d be okay, but I think I’m going to be keeping mine on.”

Students like first-year communication studies major Ciel Antoine prefer to keep their masks on, but understand the reasons that people may want to remove theirs.

“I personally like to keep my mask on just because I talk to myself,” Antoine said. “People don’t need to know that I do that.”

Antoine added that, because she has become accustomed to wearing it, it has been strange suddenly seeing her neighbors’ faces without theirs.

“Today I put on makeup and I was like, ‘Do I go out and show my face because I look so good right now?’” she said. “I get nervous.”

According to Wallace, some students are extremely uncomfortable about the mask mandate being lifted and have made changes to their daily routine in order to avoid infection.

“I’m glad they’re still enforcing it in class, so everyone’s comfortable because I know there are some people who are choosing not to go out anymore because of the mandate being lifted,” Wallace said.

Maddy Monroe, a first-year creative writing major, said it is nice to not have to wear a mask down the hall to the bathroom or at the fitness center—though she acknowledged feeling worried about the abrupt change.

“I worked out in the gym for the first time without it and my workout was way easier,” Monroe said. “We just came back from spring break, so part of me feels like it’s both good and bad. I like that it’s still in academic spaces, but I feel like maybe we could keep it around in a couple other spaces.”

First-year theater and performance major Jackson Query said a student’s choice to mask “depends on context.” He said he is glad that the mandate is not completely gone because back in his hometown of Williamsburg, Virginia, the mask mandate is gone, and citizens are less conscientious than those in Boston.

“I tend to keep mine on in most circumstances, because I have asthma and I’m immunocompromised—but I don’t feel unsafe,” Query continued. “Back home, if I wasn’t wearing a mask, I’d feel unsafe.”

Query said he understands that wearing a mask can be annoying and uncomfortable, but there are certain times people need to be safe. As long as students don’t judge others for their mask-wearing choices, he said he won’t complain.

“I don’t want people to pressure other people to take off their masks,” he said. “I’m not going to have a problem with people not wearing one, because sometimes I don’t wear one either. It really depends on the context.”

“In terms of whether people should wear a mask or not, I feel very nonchalant about it,” Antoine said. “It’s their choice.”

Eitan Ehrlich, a first-year visual and media arts major, discussed his view on the policy and related masking to wearing a raincoat.

“Masks are going to be raincoats and we’re gonna wear them when we need to and take them off when we don’t need them,” he said. “I’m figuring out when I should have it on when I shouldn’t.”